Now that the promo material is ramping up for Netflix’s Sandman show, how are people feeling about it?
I think I wanted it to look less polished to begin with and gradually pick up lustre as Dream regains strength and more ethereal elements are introduced. I really like the early pulp style of the comics but the footage so far looks more Dave McKean/Charles Vess than Kieth/Dringenberg/Jones, but I also wanted them to use different actors for the Endless in each appearance and there are good reasons to not do those things.
Interested to see what they do about the Halls and any superhero appearances.

I’m not all that excited to be honest. Any CG depiction of the dream realm will not hold a candle to the comics because CG just can’t get as weird and imaginative, at least not in my experience. I think certain things don’t need adaptations.

I’ll still watch it, I’m just not that excited. The Audible radio drama wasn’t too bad, but it was still missing the essence of the comic.

I agree up to a point, it’s never going to replace the books but might bring something new through the performances. I would’ve preferred something more tactile like a Terry G film or the bits of Mad God that I’ve seen, but time and money are real factors. I guess I’m less interested in the spectacle (though the aesthetic plays into the tone) than the storytelling, and Gaiman has admitted that he’s reshaping some bits along the way according to how he might have done it knowing the whole saga. Just from the trailers I think that the Corinthian is going to be more active in the whole plot than in the comics.

I’m feeling very hopeful about it. I’ll admit to being a little annoyed that Death won’t have her iconic look, but… she is millions of years old, and let’s face it, it’s not the 80s anymore.

We’ve had so many disappointing comics-to-TV adaptations that I’ve almost come around to the feeling that they should be avoided. But given Gaiman’s close involvement in this one, I have hope.

Mostly I’m feeling annoyed that I’ll have to restart my Netflix subscription if I want to watch it. As a big fan of the comics (they’re graphic novels!) I would like to give it a try, but I also don’t want to give Netflix my money.

I’ve been looking forward to this for a while. I didn’t actually read the comics until last year so the story lines are somewhat fresh in my mind.

It will definitely be interesting to see how much ends up being CG - especially in the Dreaming.

I’d saw wait for the dvd but they’ll still get the cash.

I’ve been quite pleased to spot some of the weirder elements hidden in the trailers, should be quite dense with imagery.
I reread the first couple of vols last year but might do a story by story read along as it’s been a while since I did it all.

I think his experiences on American God’s and Good Omens will pay off on this show. Also he’s getting to play around with story elements that he’s had decades to mull over. Should be interesting.

Well I’ve watched the first episode now. Happy enough with that, it was never going to be an exciting episode since that issue is mostly just set-up.
I was never sold of having Dance in that role and now I’ve seen it I think I would’ve preferred someone more distinctive in one way or another. Maybe Ray Winston or Brian Blessed, just someone less smooth than him. It would’ve been a nice final role for David Warner if they were set on an RP type.
I feel as though the whole thing is going to be slightly classier than I’d like, but that’s ok.
Lucienne was good. Sturridge was fine, for as much as he got to do.

In college I was a big Sandman fan. And by big fan I mean I bought some house paint and black sharpies and painted this on the wall in my dorm room: 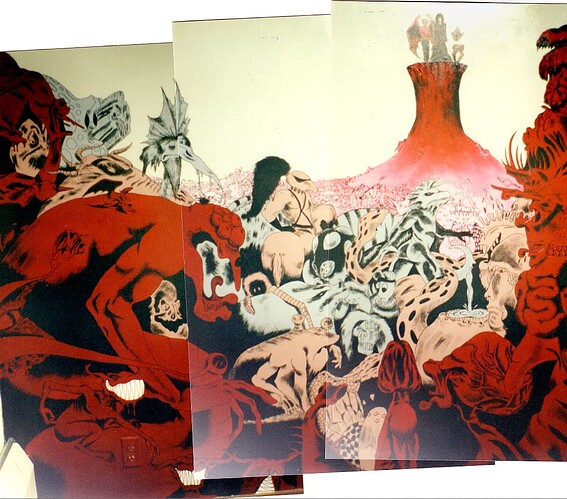 It looked effed up because this was before I owned a digital camera (and waaaayyyy before phones had cameras) so I had to take actual film photographs of it, from inside the room, and try to stitch the prints together. For a sense of scale, there is an electrical outlet in the bottom left corner. The top bit got overexposed but I took a closeup of that 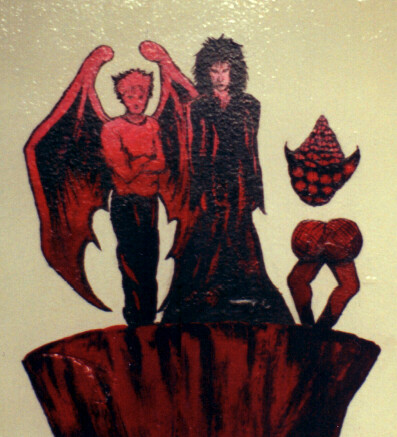 Painting this mural might be the single most satisfying thing I did in college.

So anyway… I’ve been leery of a film/tv adaptation. But so far, what I’m hearing sounds like it would be not disappointing.

Now that Our Flag Means Death is off until next year, maybe I’ll cancel HBO Max for a while and pick up Netflix in its place.

I have only watched The Dream of a Thousand Cats because my friend has become a cat person. It was pretty good and if it represents the show as a whole, it’s certainly promising.

Patton Oswalt! Or his unmistakable voice at least.

I’m through episode 3 as well. I think Oswalt does a good job as Matthew the raven but I wish on a purely selfish level that it was someone less recognizable. I can’t hear it as the raven talking, to me it’s just listening to Patton Oswalt while looking at a bird. Perhaps in a few more episodes it’ll take. (I have a similar problem with Constantine who to me is just Clara.)

I’m liking it a lot so far, reasonably faithful but not slavishly so. I think the best part of the production is the lighting design – give the lighting director an Oscar! It does a really good job of showing the faces in a way that’s very reminiscent of the graphic novels, with the high contrast and dark shadows.

I am not looking forward to the diner scene. It was half-traumatizing as a comic, not sure I want to see it in live action.

I dropped away from Doctor Who after Tennant left, so Jenna Coleman never impressed on my mind as Clara. With Patton I think it’s mostly because I’ve been seeing him so recently as Max.

You may have watched it already, but I was concerned about 24 Hours too as I was watching it with the missus and she hasn’t read it. I found it quite tastefully done. Not toothless but nicely avoids feeling too extreme.

I’ve been reading the corresponding comics issues along with the show and I have to say, while the comics have a feel and style that I love, the show may actually be telling the story a bit better. I know Gaiman isn’t actually writing the scripts, but he’s a strong presence in the show and it’s almost like he’s spent the last 30 years saying to himself, “if I had it to do over again I would…”

I think that’s exactly how he’s approaching it, he has been living with these stories all of that time and has always been quite open about whether or not he was happy with the decisions he made along the way. I did enjoy the show and found the changes interesting.

The “24 Hours” story was done SO much better here than in the comic. (I feel unfaithful for admitting that.)

So far this is everything I could have asked for in a Sandman adaptation.

It’s been 25 years or more since I read the comic. I wasn’t looking forward to what I just call “the diner scene” but it wasn’t as bad as I thought. Frankly, I remember a lot more skin-peeling and a lot less boinking.

Definitely enjoying the series, but I can only watch one every couple of days, it’s too dark for binging! I’ve been watching Wellington Paranormal as a palette-cleanser after Sandman. It’s very funny when I can understand what they’re saying.