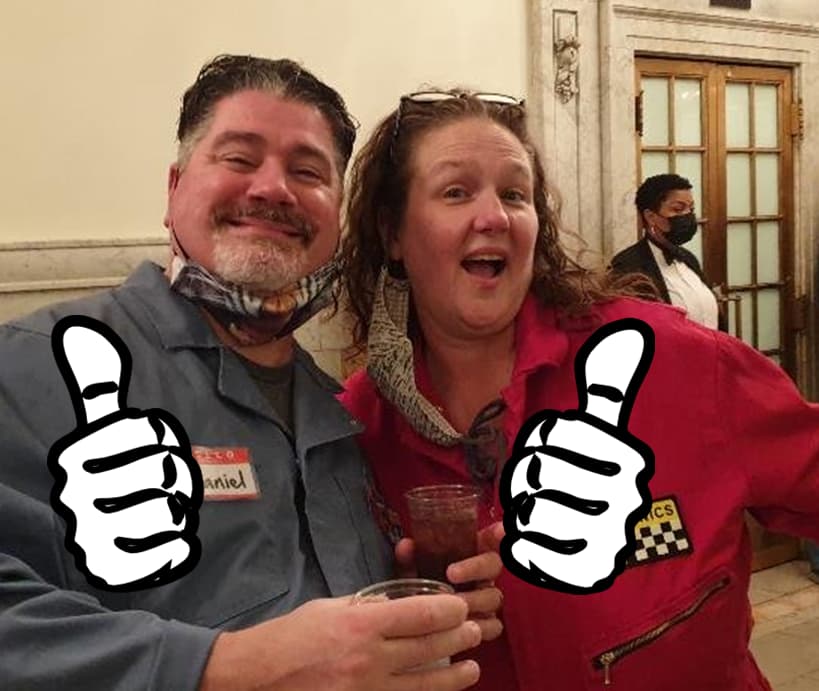 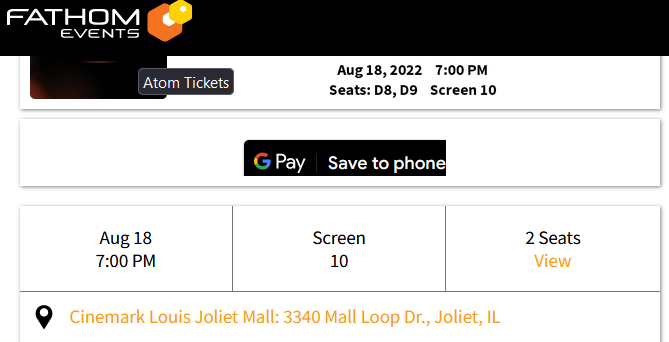 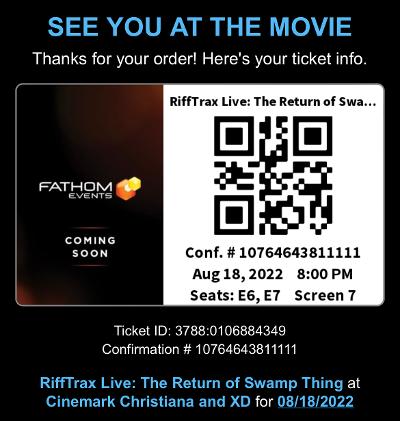 I’m sure we’re all trustworthy here, but this site is publicly accessible so maybe you don’t want to post your ticket barcode, ID, and confirmation #.

No worries there. We had some friends want to join us, so we canceled that order and got new tix.

Aha! You’ve planted a trap for any ne’er-do-wells! Pretty nice!

You’ve planted a trap for any ne’er-do-wells!

In fact, it will be part of a few days that should be a pretty good MST3K week for me. Hopefully I’ll be able to share details about the other portion on the forum soon.

I’m excited to get more details about what the event will involve. A new riff premiering on the GizmoPlex? Showing a classic Rifftrax with a Q&A after? Mike judging a twirling pasties competition between Bill and Kevin?

The world needs to know!

It did say this: 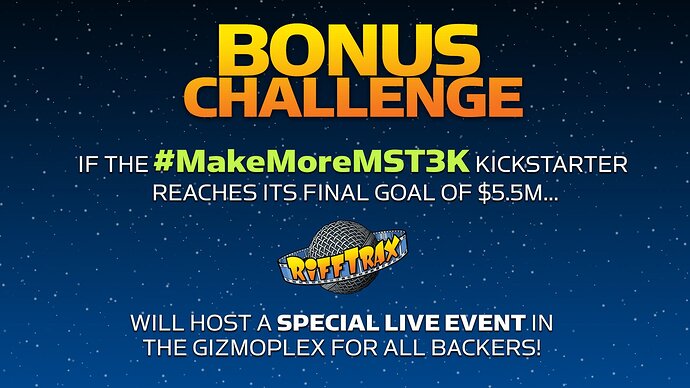 That was the first time I saw a Rifftrax live show in the theater, and it was a blast.
Super creepy short, pretty good riffing throughout, loved the end credits song, and I’m not ashamed to say I got a little emotional during the sweet 16 tribute at the beginning.

I loved that I got a special shout out by watching from Beaverton, but I’m not sure if I laughed myself sick or if it was just the drill discussion, but I was a little woozy in the short. I’m a little surprised the dog chewing on sticks wasn’t more disturbing to puppet Danny though.

It was a great show, the movie was delightfully bad and the short was creepy. Sorry to the people trying to create a feud between MST3K and Rifftrax but Tace, Frank, Joel, and Jonah Ray gave a shoutout for Rifftrax’s 16th anniversary.

Alas, no Tom Servo’s allowed in the theater. Entities familiar with the matter say.

I thought they found that dental short with the weird puppets to show that there are things creepier and worse than Return of Swamp Thing. The short looked like the cheap version of Thunderbirds.
As for the movie, clearly 92% of the budget was paying for Louis Jordan and Heather Locklear. I was hoping Leslie Caron would show up, throw something at Jordan and say, “what a bore”.
Makes sense, or maybe “The Night They Invented Swamp Thing”

Alas, no Tom Servo’s allowed in the theater. Entities familiar with the matter say.

Thank God, tbh. Call me a fuddy duddy, but I always hated the shots of the audience where a bunch of folks would be raising their Servos above their heads, as if that didn’t block the views of the people behind them.

And then where to they go the rest of the time? That has to be a fire hazard because they’d just be sitting in the aisles.

I love that people are into what they’re into. I love it too. But you also have to be courteous to those around you.

Saw it last night, and it was a hoot.

There was a part of me that wanted to scream in response to the the puppets in the dentistry short.

As for the film itself, as someone who grew up when studios were capitalizing on Swamp Thing thanks to the Alan Moore stories (mentally sang the theme to the Swamp Thing cartoon during some parts of the film) and is well aware that it’s from the director of Munchie, I was prepared for the cheesiness and wasn’t disappointed by the riff except for one thing: Mike and the gang didn’t include the film’s mid-credits scene.