RiffTrax: The Game, coming May 5th. Are you game? 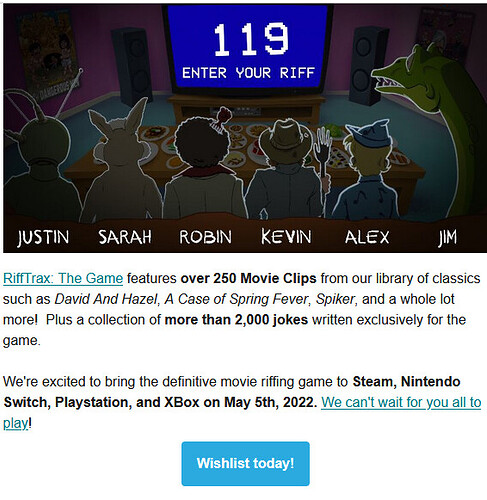 Wouldn’t it be a trip to get a livestream with the Cast of MST3K playing Rifftrax: The Game?

I’m not a big gamer.

Me either…but we use Xbox for all our streaming apps and whatnot. Has full HD output and usually has all the apps, so a quick one-stop for all that stuff. =)

I have a Chromecast for streaming.

As much I as I’m looking forward to getting the game on the Switch, I’m not entirely sure about how Nintendo fans will reacts, as I have a pretty bad feeling that they’re gonna keep spamming words like: “Nintendo is dead”, “ratio”, “I’m no longer a Nintendo fan” blah blah blah, etc.

So I have a lot of social anxiety when it comes to online gaming, but if there was ever a game that could get me to come out of my shell and play with randos, this would be the one. Long as they keep it cool.

This game is also available for Mac.

This is mentioned in various articles, as well as the Steam system requirements for the game:

Oh nice! I didn’t see that on Steam, I just saw Windows. Thanks!

Wow, that does look like a lot of fun! Look forward to it.

You say that, but when I tried to have a MST3K game night, only 1 person showed up.

I’m glad they went the Jackbox route for this. My first thought when I heard the announcement was another licensed side-scrolling platformer/action game. Those can be good but FAR too many exist as licensed properties, especially for Internet fandoms.

I’m going to absolutely check this out. Like others, I don’t have a ton of MSTie/Riffing friends IRL but

Yup. No idea what it is or what it does but count me in

We have FOUR Macs, none of which will play this game.

Now I’m going to have to drag out the old Xbox One, move furniture, hook it up…

I want to see Bill and Kevin finally settle their lifelong feud.

Nick Nolte as the Final Boss?