Looking at the certificate it expired on 9/25.

I use let’s encrypt and it’s very easy to renew the certificates a month before they expire, no idea how much work they will have to do to renew an expired cert with godaddy.

Yor is a good one, but 2019 really should belong to Attack of the Super Monsters. It’s an under-discussed gem.

Attack of the Super Monsters. It’s an under-discussed gem.

I honestly find the riffing on that one a bit dissapointing… I’ve watched it several times unriffed and found it just hysterical in its sheer madness.

2019 really should belong to Attack of the Super Monsters. It’s an under-discussed gem.

They’re going by sales, but I felt the same way - the riffing’s hilarious and it’s a stand-out, movie wise. If I were to pick my favorite from that season it would have been Super Monsters, and I would have thought it a strong seller.

Suburban Sasquatch surprises me, that, that was the one that sold the most… but I tend to dislike those grade Z type movies, and now avoid them. Too bad Gymkata was a just the jokes (I’m guessing they don’t sell as well?) if that had been movie with riff it might have sold better.

Suburban Sasquatch was the right riff at the right time for me. 2 months in to the pandemic, it provided a much needed and cathartic laugh. And I enjoy the Z-Tier right up to about Things. Things is as far down the hole as I go.

Too bad Gymkata was a just the jokes

One has to wonder what is in the mind of the rightsholder(s) of Gymkata. Why would they not agree to allow Rifftrax to do the full-on video riff of their film? The only reason Gymkata is known in the world at all today is as the butt of a joke. Do they think they are protecting some cinematic classic from unwarranted mockery or do they think their masterpiece (starring Olympic gymnast superstar of the moment, I wanna say, Kurt Something) should be treated monetarily the same as, say, The Godfather?

I’ve read that Warners (the current rights holder) told Rifftrax that they will never license their movies to them.

I don’t get it either… but then again it won a poll conducted by Warners and Amazon - wiki quoted Warner’s George Feltenstein in an interview (2006) where he expressed surprise that it was selected but spoke about how those types build up a cult following… “Suddenly there is you know fierce demand for these relative obscure films, and they end performing very well when they do get released on DVD.”

So, to them it’s not about protecting a classic, but holding onto something that could eventually make them a profit. Maybe they think a Riffing would damage the films reputation (yeah, I know), or water down the demand for it (but heck, you could offer it as a BD extra and pull in another group of fans who have zero interest in the movie, but would buy it for the riffing)

It’s funny how this is sort of the opposite of popular culture’s “make a quick buck now at any cost” ethos. The rights holders might indeed see a bigger return if they hold out for the long run, depending on how far you let “long run” go – but it still seems silly. Even assuming some wild new shift in popular taste in, say, 20-30 years, Gymkata is not going to pull in $1B like a Marvel movie.

Here, I think the “make a buck now” play is the smarter move. It’s making zero dollars gathering dust in a vault. I guess maybe it comes down to pride?

Similar thing going on with The Final Sacrifice. Rowsdower is a bona fide thing thanks to the exposure that movie got on MST3K, but the filmmaker refuses to let them re-release it now. Seems to be a mix of spite over being mocked and avarice that there might yet be another way to make a buck off the property.

I also wonder if it’s a disinclination of the movie creators to share additional profits with other people who also contributed to the film… depending on what kind of contracts they made. 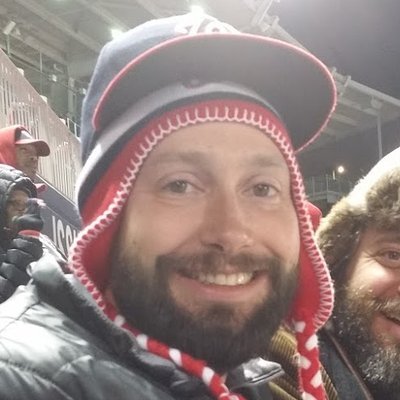 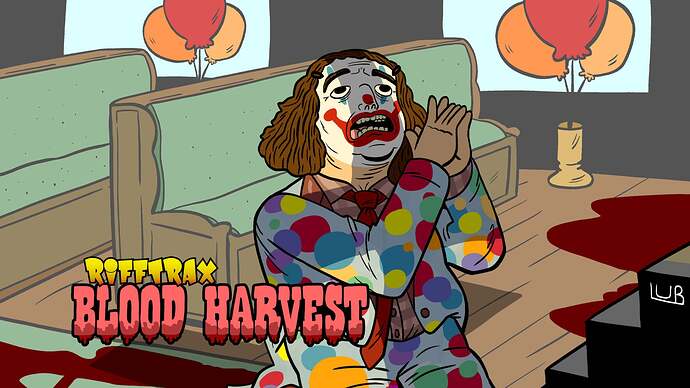 Many movies feature clowns, but Blood Harvest carves out bold new territory by making the clown sinister and creepy! Of course, the clown is played by Tiny Tim (ukulele & adult diaper enthusiast, not

Soundtrack sometimes reminds me of Tenkiller.

Director of Giant Spider Invasion AND made famous for Joe Bob Briggs hosting it on The Movie Channel?

If it had come out a year or two later, MGM would have owned it. The earliest MGM movie not owned by Warner is Poltergeist II which was released in May of 1986. MGM has had no problem with titles like Stone Cold and Breaker Breaker in the past.

Blood Harvest is a hoot unriffed, so of course I had to buy this latest RiffTrax release!

pull in another group of fans who have zero interest in the movie, but would buy it for the riffing

Yeah, I mean, let’s be real here! I never would have watched the Twilight series if it weren’t for RT. And, TBH, none of the Star Wars prequels, nor any of the Lord of the Rings trilogy (I admit the latter trilogy was pretty good, but it just wasn’t on my radar at all).

I do own the “Just the Jokes” audio for the last two of the Star Wars sequels (“The Last Jedi…something something” don’t remember! and the other one…although I liked the first one well enough with the RT, of course…never would have seen those unRifftraxed, though, I don’t think)…but still haven’t got around to fiddling around with synching them up (I know they have an app…which I’ve never used…and it’s not that hard to hardcode the audio if one has the time and processing power/memory…but good old fashioned just two open media players on a desktop computer works fine for me).

Just wasn’t that motivated, in those cases. Like I was trying ineptly to say, it’s not a big deal to sync up the audio, but it does take a small amount of motivation. What can I say? Twilight movies and the Harry Potter ones (another series I never would have seen) and the LOTR ones motivated me, for some reason.

Although I’ve owned x Xx (really, Discourse? The those three letters presented as a single word/token are verboten? That’s so…discourse!) for years, it seems…I might have seen it before in the RT version, but I have no recollection!

Anybody else have any Rifftraxes they pulled the trigger on, then forgot completely about before watching them?

During that period when they were releasing mostly “Just the Jokes”, fans were authoring their own discs (movie with riff), and I had a pal who would do that for me (provided I bought the JTJ 'trax of course). It was so convenient to have them like that.

He’s fallen off the face of the earth, so these days I have to watch them the regular way and because of that, don’t do many re-watches. I guess could always learn how to author discs myself, but heck, I don’t even have the means to download their new app that apparently makes watching much easier. So, I still watch the new ones (like Gymkata, WW84) the way we did back in, what was it, 2007?

As for your question - I have a few I bought and started, but lost interest in and never finished. The Universal Soldiers, some movie about a hijacked plane with an actress from Xena in it, etc, ect… at times I stumble upon them, and think, “I should finish that” but never do.