Alongside Grant Baciocco, Russ Walko, the man behind our favorite laid-back green bot: Growler, and his company Puppet Garage, also deserves some appreciation. Let’s hear it!!!

I’d known Russ socially for awhile but the first time I worked with him was almost 13 years ago to the day on, ironically, Patton Oswalt’s My Weakness Is Strong DVD. 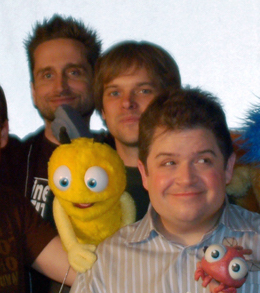 We really hit it off that day and realized we had very similar senses of humor so we began working on different projects together.

Russ is an incredible puppet builder. You can see a sliver of his work at puppetgarage.com. He is routinely hired by The Jim Henson Company to build for them. I always joke that I used to build puppets but the moment I saw Russ’ work I gave it up and decided to just pay Russ to build puppets for me.

As great as he is a builder he is unbelievable puppeteer. His precision as a puppeteers is second to none.

When Joel asked me to puppeteer Crow for the Turkey Day 2014 segments he said, “We’ll need a puppeteer for Tom.” There was no other answer but Russ.

We were given the title of co-lead puppeteers on Season 11 but it was a 99%/1% split. Russ worked everything out, modified the bots, build most of the props, figured out how to puppeteer Gypsy from above, etc., etc., etc.

Grateful very single day to be friends with and work with this talented puppeteer and I look forward to many more years of the same.

He’s the Growler to my M. Waverly. Literally. 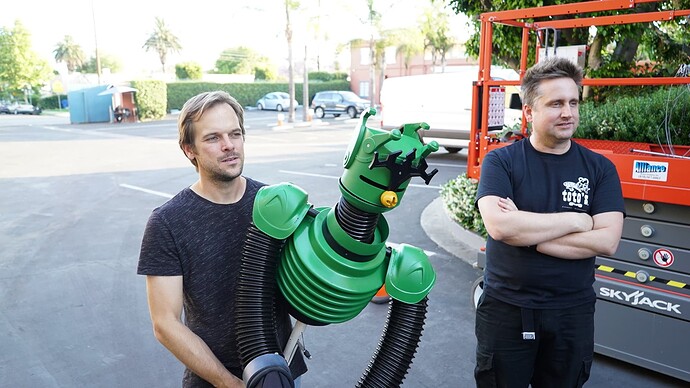 Wow. Grant, beautiful. Just beautiful. That was the most amazing story I’ve ever read!

Just as it was with M. Waverly, I was thrilled with the addition of Growler to the mix of characters on MST3K. Russ Walko makes the character a lot of fun, and enough can’t be said about that. He and Grant leave you hoping that you see more Growler/Waverly shenanigans throughout the series.

And thanks so much for sharing that story of the work that y’all did, @themwaverly.

Is it wrong that I want to see Growler and M. Waverly recreate the classic Rolf/Kermit song I Hope That Somethin’ Better Comes Along, rewritten to be about cheesy movies?

Russ is an amazing actor and puppeteer. The chemistry and heart that he and Grant put into scenes with Growler and Waverly feels like the best of classic MST3k.

Grant, it’s so awesome to see that you, Russ and Patton go back a long ways. Thanks for sharing your story! It’s so cool to hear about the connections the cast has with one-another.

Growler is likely the most Henson-esque of the Bots, which is a factor in why I like him so much. But Russ takes that familiarity, makes it his own and places Growler directly into the MST3K universe.

It’s nice that there’s a character on the show who specializes in music. Kinda wish we saw him play more of the background music, but I’m not too worried. As long as our friends Growler and Waverly are safe and sound, there should be plenty more music to go around.

Anyone know if that’s Russ Walko playing The Wizard, keyboardist of The Weirdos, the puppet band singing that new song with Coldplay? I feel like he and Growler would be good friends and have jam sessions together in the garage.

Uh, Lindsay? I dunno if I have to say this, but…
After checking the Instagram post, I think you got the wrong guy.

Or a different one, maybe? I’ve seen articles list him as a puppeteer on this but it never says which characters.

Hm… in one Instagram post, I think he was the puppeteer for… the manager by the name of Bruce Cakemix (actually pronounced “Kehkehmix”).

That’s so cool. I love all of them. Such great puppet designs and personalities. I hope they do more appearances.

I can confirm, Russ plays the purple manager named Bruce.