Given the recent season 13 announcement - I’m amused to see that we now have a upcoming blu-ray box set of Santo movies Santo: El Enmascarado De Plata

My riffing sense is tingling…

Maybe that’s how it’ll be from now on. Joel making big deals with movie companies and it won’t just be the riffing show. It’ll also be a marketing juggernaut with special releases and tie-ins. The gizmoplex won’t be simply a place to watch MST3K. It’ll be the future of distribution. You won’t be able to get anything to market without Joel’s blessing. Just you watch. In three years, the streets will be filled with goons in pleather jumpsuits and spheroid helmets going door to door making sure that the tapes you’re circulating are on the approved list and that Joel is getting his cut. Then, on to Mars!

Oooo. Thanks @mwbworld! I always love the strange, yet appealling!, things I discover through the MSDiscourse 3000. I get such a kick out of these dubs… back when the El Rey network was a thing, they’d play these over the weekend. Had. To. Watch. (I just couldn’t look away. There’s really something wrong with me.)

I looked at the company behind it VCI Entertainment and they seem to offer a lot of goodies (old serials and The Batwoman as a double feature with the Panther Women!)

I guess that I’ll be raiding their catalog in the future!

Thanks for the link, awesome release!

This suggestion came up while I was checking out Santo, it sounds like a good film to riff as well. I’d call it Lady Santo meets The Murders in The Rue Morgue. 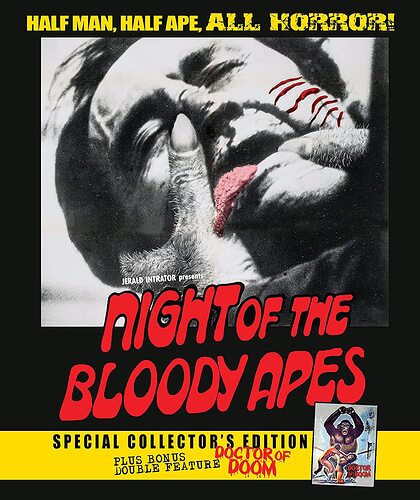 Amazon.com: Night of the Bloody Apes (with bonus movie Doctor of Doom) [Blu-ray...

''Night of the Bloody Apes'' is a remake of Cardona's Doctor of Doom (1962), spiced with women, medical footage, women wrestling, and cheap gore shots. Female masked wrestler Lucy (who looks like the devil)...

Doctor of Doom, or any of the other Las Luchadoras movies would be more fun, and more appropriate for MST3K. (Night of the Bloody Apes does have some unpleasant bits of gore and sexual violence, and was on the infamous UK “Video Nasties” list, though probably the least offensive of that lot.) It also inexplicably has very little lucha libre - the heroine’s job as a luchadora is mostly irrelevant to the plot, and she basically just acts as a standard damsel-in-distress outside the ring. (Unlike Las Luchadoras, who get to kick some ass.)

That does sound like the better pick. For now I’m quite glad we’re getting both El Santo and The Batwoman in the upcoming series!

Bump for this recent release from VCI which features one MST3k classic! Darn good price too with the July 4 sale: 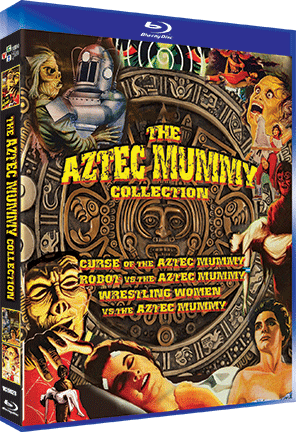 The ultimate collection of Mexico's classic Aztec Mummy films, sure to please all fans!