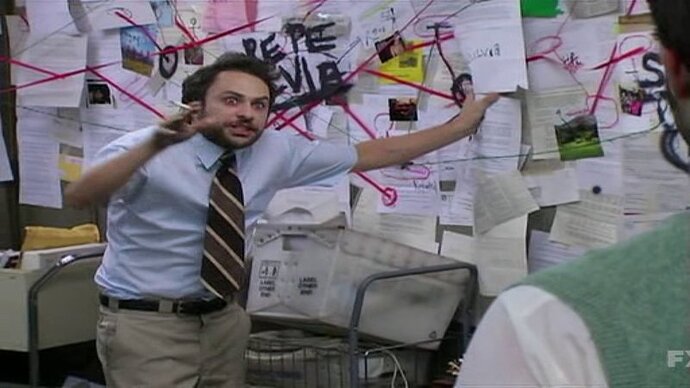 Many of the episodes in Season 13 seem to connect to one another. I’ve seen some episodes “foreshadow” experiments in others, or make reference to actors/characters we will see in future shows. Here’s what I’ve seen/heard so far! Feel free to add to this list as the season rolls on:

Lisa Rinna is played by GPC on Santo’s shopping network in 1301, and appears on-screen in 1302.

Dom Deluise is mentioned in the end credits of 1302 and is the voice of the lead character in 1304.

Dr. Cabal, THE STRANGE FINANCIER FROM THE FUTURE, who first appeared extremely briefly in 1301, is a reference to a character in 1310. His costume is a reference to an earlier film adaptation of the same Wells novel, Things To Come (1936).

Maybe they’re meant to be connected! Maybe our writing team is an extremely clever collection of folks (they are!) ! Maybe this is all a coincidence! Maybe it’s just a show, I should really just relax!

Anyway, what connections are you finding between Season 13’s episodes? Feel free to mention them here!

Another connection I caught in 1303, though this may also be a coincidence:

Characters in Beyond Atlantis reference seeing a statue of “a mermaid sitting on a Greek centaur”. Crow, in an early season advertisement for Onyx Path, tells Jonah that he wants his character to be “half merman, half centaur”. Not a strict episode-to-episode connection, but it’s interesting nonetheless.

Maybe they’re meant to be connected!

Entirely possible. Maybe it’s a brand-new spin on episode connectivity, like how - up through The Land That Time Forgot - the Mads’ Invention Exchanges borrowed from a riff from the previous episode in Season 11…

This could be a bit of a stretch, but there was a riff early on in Robot Wars where Servo references Barbara Crampton’s other movies, Re-Animator and Castle Freak.

These movies also feature Jeffrey Combs, the star of the upcoming featured movie Doctor Mordrid, although he isn’t referenced by name in Robot Wars.

Leading up to the epic conclusion in The Christmas Dragon as Joel calls out “Riffvengers Assemble!”

I was just rewatching Doctor Mordrid in preparation for this Friday’s premiere of Demon Squad, and I noticed this connection:

Crow refers to a character as “Frankie Avalon’s awful-ganger.” A little down the road, Episode #1309 (The Million Eyes of Sumuru) will feature Frankie Avalon.

In Doctor Mordrid, the title character opens a case to reveal the top of a crystal ball, which is glowing with a soft blue light. Servo riffs, “His mood globe indicates he’s feeling calm.”

Next episode, Joel’s invention exchange is to give that same Servo (Hampton’s) a mood globe, and the first mood it shows is that he’s feeling calm.

Not to be that guy, but Hampton Yount is Jonah’s Crow and Joel/Emily’s Servo is voiced by Conor McGiffin (at least when Joel is not recalibrating him to factory default J Elvis setting).

Thank you. I can’t believe I got that mixed up. I don’t think I’ve screwed that up before.

Hampton’s Servo is so good that he’d blow all the other Servos out of the water and they wanted to save them the embarrassment so they handed him the Crow puppet instead.

1301 - 1302
Obviously there’s the wrestling motif, if host segments are enough to draw a connection.

1302-1303
Both films have “heroes” making unwanted advances on women who eventually fall for them anyway. (Ick.)

1303-1304
Both films feature scenes that revolve around the discussion of fractions.

1304 - 1305
Both Munchie and a group of demons have been locked away and are trying to escape.

1305 - 1306
Both films have characters who are powered by mystical daggers that are inserted into their torsos.