I’m with @Charles here. It doesn’t necessarily even have to be that I can’t stream, just that I won’t. The “why” is nobody else’s business.

As Mark Twain reputedly said, “I am continually amazed to find myself described as ill-tempered by people I have never laid eyes on”.

Not that it’s relevant but I’d describe Mark Twain as ill-tempered, too.

Information on when the season 13 episodes would become available continues to be delayed. First, we were told the episodes would be available after the live premiere, then after the soft reboot for world premiere in May. Last mention was December. Why should people waiting for digital downloads especially by sponsoring the kickstarter effort be last
to get to see season 13?

Well, they only mentioned “immediate” downloads in one update during the campaign. And that was before there was even a set number of episodes.

And there are multiple options for streaming the episodes.

The whole Kickstarter wasn’t to give us all immediate access to digital episodes once they air. It was to make season 13, and then provide us with the different formats dependent upon what was pledged for.

So have patience. You’re backing an independent operation, not Netflix or AppleTV.

On the upside, anyone who backed at a level which includes downloads has 12 months of access to the Gizmoplex, so they can see them the second they come out. 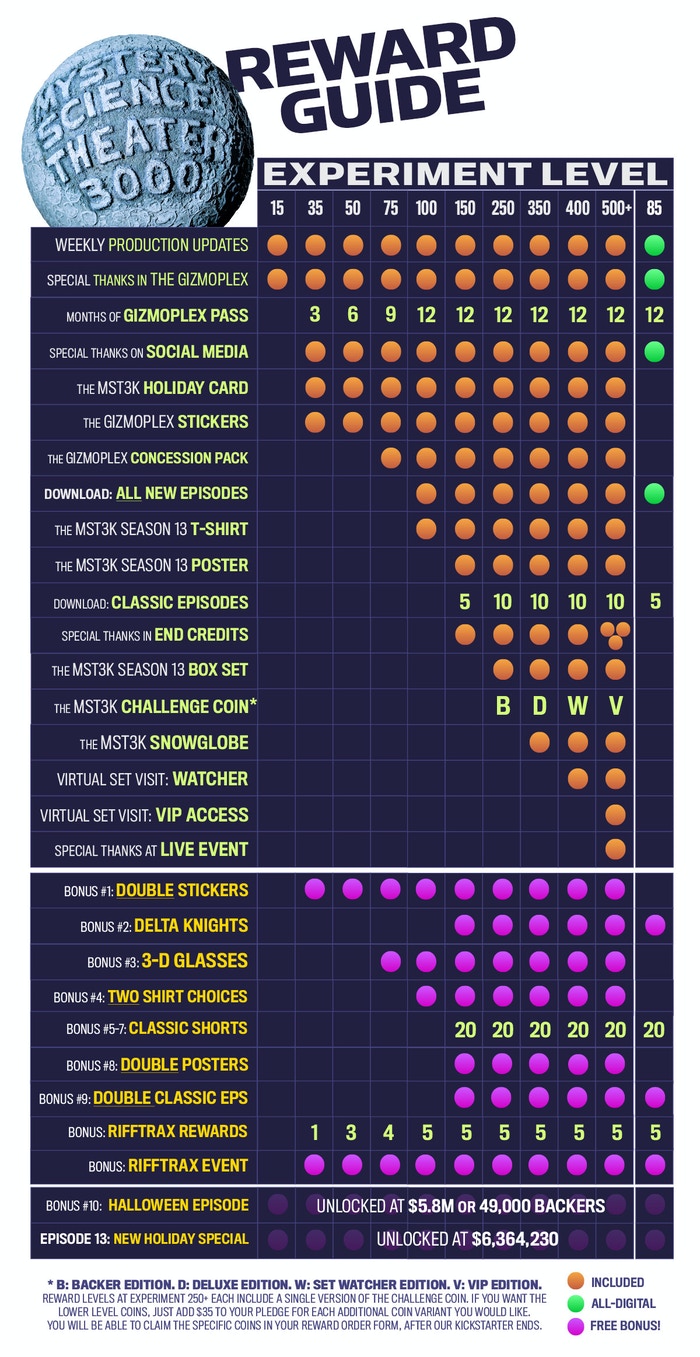 Unfortunately, I am one of the unstreamable folk. Can’t stream so the glorious app is totally worthless. It took over a month of trying to email tech support before they finally admitted that I just have to wait for so undetermined amount of time. I know I sound bitter but just needed to vent.

I don’t mind the venting. It’s the internet-it’s what it’s for. I just want to try and mitigate people’s expectations. Because for me it’s either stream now or wait. And that’s fine, because I know it will be there. And I’m VERY excited for the dvd release, to go with the other pledge editions I bought before they sold out on Shout.

I wonder if they had the same issues from backers during the Netflix seasons. Since this is my first MST KS, was there pushback for people unable to watch on Netflix?

But I think, regardless of all that- the moral of the story is, it’s just a show, we should really just relax.

Well, I missed sn 11 kickstarter and had to wait until it came physically which seemed extremely long. It didn’t help with Netflix having a year before releasing physically. For S12, I supported the Kickstarter, got l set 6 months before it was released in retail

I have a feeling the same thing will hold true for these dvd releases. And I’m hoping we get a bonus disc of all the goodies we’ve gotten this far.

You can download load the season 13 pre release episodes but for offline viewing only. The official release season 13 episodes will be download to own.

According to the latest updates the download to own shows will be available 2 weeks after they officially premiere. But you can still download for offline viewing the next day.