Let’s say what we all hope for happens and we get Season 14 what movies would you pick for it? I’ll start by saying there are two more Ator films I’d like to see I’d also like to see the crew take on the other Deathstalker films as The Warriors From Hell is my personal favorite Joel episode.

What do you the viewer think?

I’ve long hoped for “The Last Dinosaur.” More black and white films would be great as well.

I want Munchie Strikes Back for sure! I saw that on cable back in the day.

Night of the Lepus has to be done. It was even mentioned on the original show - either they couldn’t get the rights then or Best Brains thought it was just too easy. 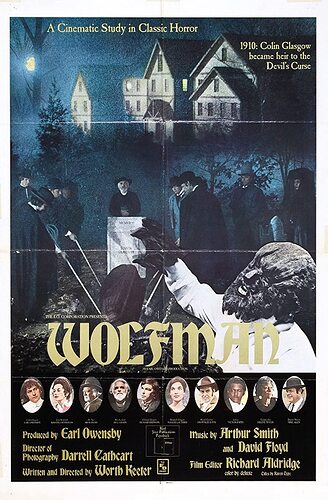 Wolfman: Directed by Worth Keeter. With Earl Owensby, Kristina Reynolds, Sid Rancer, Ed Grady. A man finds out that his family has a werewolf curse put upon them.

Another Santo film, such as Santo vs. Frankenstein’s Daughter, from around the same time he was messing around with the Treasure of Dracula.

There’s The Magic Christmas Tree, a low-budget kids-movie trailer I saw on a trailer compilation from Alamo Drafthouse that looks so awful that if they need to give Emily a Christmas movie to call her own to riff, this seems about right.

Gamera vs Viras, so Emily can riff a Gams movie too.

I’d love a return to the world of Russian Fantasy, like Through Fire, Water and… Brass Pipes, the question is whether or not there’s an English dub for it/them.

Rifftrax has that, but there’s no one stopping them from trying it, too.

Another Santo film, such as Santo vs. Frankenstein’s Daughter, from around the same time he was messing around with the Treasure of Dracula.

Is Frankenstein’s Daughter a vampire? Is Santo allowed to be vs. something other than vampires?

Shout Factory just released Alligator and Alligator II: The Mutation on blu-ray and I have no objections to either being on the series if they want to look into them. Hell, they were heavy runners on Sci-Fi back when they still aired the show, so I’d have warm nostalgia fuzzies if they were to slide them into the show.

I’d also love to see Iron Warrior on the series, but now that I have the blu-ray in my possession, I think I understand why they wouldn’t. ::cough::boobs::cough::

How editable is that to MST3K content standards? One scene could have a bunch of Cambots enter the theater and hover around the offending bits.

If they want to do a musical episode, any of the Cannon Movie Tales line of fairy tale adaptations would do well. Especially since they tend to rope in a well known actor for each one, like Craig T Nelson or Christopher Walken.

They had originally intended to do ‘Deathstalker’ for the Live Show, but after cutting out all the objectionable material, there was only about 50 minutes left, so they substituted ‘Deathstalker II’. So they might be OK doing ‘II’, but they’re never doing the first one.

My long-time wishlisted episode is ‘Slipstream’. I love that cheesy movie to death.

It would be cool if they grabbed one of the suggested films from the forum thread.

Lots of prospects here, too:

I’ve always been a movie kid and once I found MST 3K something I loved to do was collect lists for possible future episodes. When I was like 12 or 13 I even embarrassingly called Best Brains studio (trying to sound much older then I was) and asked how to submit movies for their considerations. God bless the patient woman I spoke with who explained about copyright and the films they could use. After that call, like an idiot, I even wrote a letter addressing copyright free films and sent that in…

Yes! Slipstream would be a great choice!

I’d love to see them get a big hitter from Universal, either Dracula or Frankenstein.
Battle Beyond the Stars
The Highlander
Frankenstein Island
Fire & Ice

Since we may never get a tape of the live show, I want to see them do Argoman. If Argoman were an episode, it would be in my top 3 easily, if not #1.

Oh yeah, Fantastic Argoman, I actually have that on DVD, hilariously bad movie, I couldn’t see it live so let me see it on the 'plex.

And speaking of genres… another western, please.

The House on Haunted Hill with Vincent Price! That acid pool could lead to some interesting skits where the Bots try to install an acid pool on the SOL.

Speaking of Vincent Price, they should screen Dr. Goldfoot & the Bikini Machine too!

I would like to see them revisit some greats from the past. There are a number of Bert I. Gordon films still to be riffed and who knows what else may lurk in the Sandy Frank catalog of “films” cobbled together from old TV episodes. And a return visit from Santo would always be welcome.