Show us your Krusty, please!

It used to be that one of the staples of local TV stations, in addition to the late night horror movie host, was the clown (literally) who hosted a kid’s show. A fine example of this can be seen in the Christmas program hosted by Whizzo the Clown over at Rifftrax. Shows of that type once were found all over the dial, all over the country.

Use this thread to delve back into your long ago youth and share with us memories of the local TV clowns you used to watch.

In the St. Louis area when I grew up, there were two main ones. First was Corky the Clown. 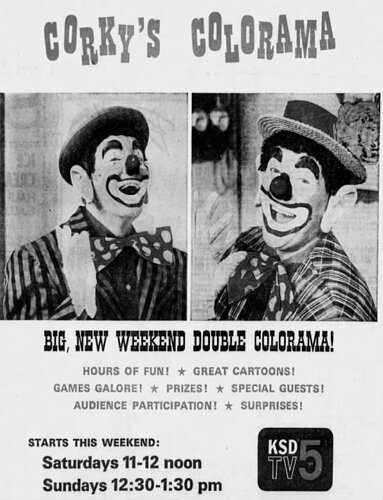 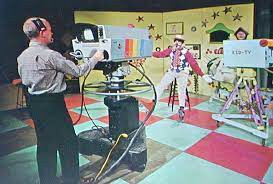 It was hosted by the station’s (I think) weekend weatherman. Since we little tykes didn’t stay up for the 10 o’clock news, it was years before I discovered this fact. I admit, a little part of my youthful innocence died when I learned that truth. 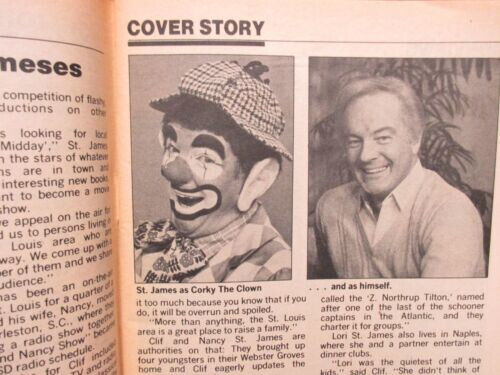 His name was Clif St. James and apparently he passed away just a few years ago at the age of 91.

The funny thing was, as the years went by, he began to do less and less of the clown make-up. The ears were probably the first thing to go. Then I think the facepaint. Finally, he just hosted the show as himself. I don’t know why, but it certainly felt like towards the end these were just “contractual obligation” shows.

I remember on his show he had a puppet or two. He had Thor and I think Spiderman cartoons.

The other big local clown was Mr. Patches. 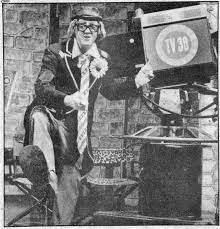 Every day, he had a birthday boy or girl who bought along maybe 10 or so friends and they were Mr. Patches’ guests for a party. 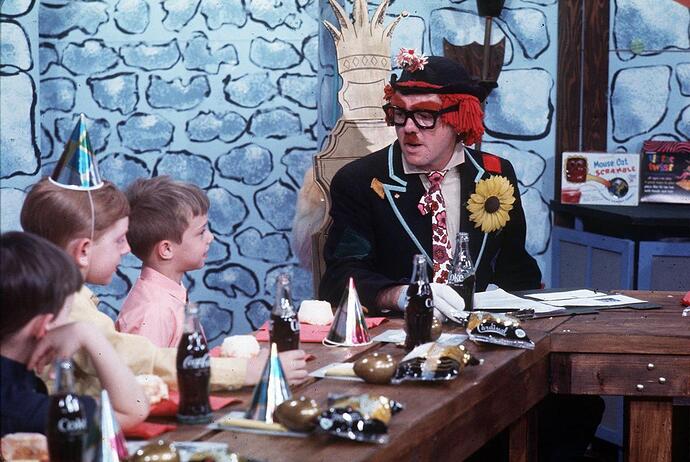 1200×805 150 KB
Looking at that picture now all I can think is “all those kids and all that sugar!”. If you see a Golden Egg in front of each kid, that’s because Red Goose Shoes (“Half the fun of having feet is Red Goose Shoes” – Mad Ave, you did your job well) were a sponsor.

I remember he showed Ruff 'n Ready cartoons and maybe Yacky Doodle. I don’t know if it was his trademark saying, but he did always get a laugh out of the kids by reminding them to “keep your elbows out of your ears”. I also remember him having promotions for kids to hold backyard carnivals to raise money for Muscular Dystrophy.

The man behind Mr. Patches was Jack Miller, a lifelong St. Louisan who passed away in 1999.

So who were the TV clowns in your area when you were a kid?

Most of the places where I lived growing up, we didn’t have the kiddie variety show. Once we moved to Denver, however, I was introduced to Blinky. 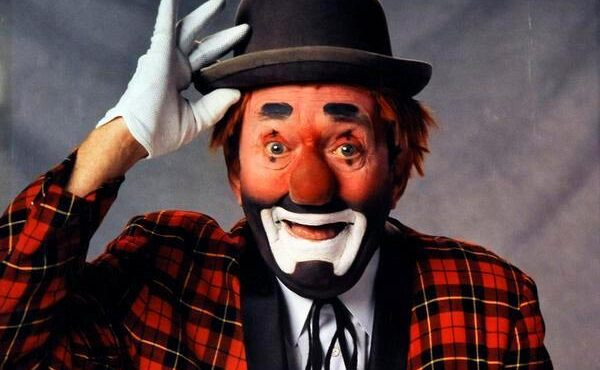 Blinky’s Fun Club was a staple on weekday mornings on the independent channel (channel 2 for any locals in the audience).

I think it was Channel 13 that had the lady in the cat costume called Miss Kitirick. 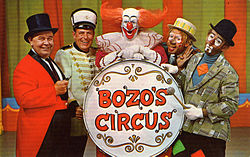 The Bozo Show was a locally produced children's television program that aired on WGN-TV in Chicago and nationally on what is now NewsNation. It was based on a children's record-book series, Bozo the Clown by Capitol Records. The series is a local version of the internationally franchised Bozo the Clown format and is also the longest-running in the franchise. Recognized as the most popular and successful locally produced children's program in the history of television, it only aired under this

a little part of my youthful innocence died when I learned that truth.

What fake fact did it replace?

No “fake fact”, just the notion that Corky was simply Corky. He made personal appearances at local malls or whatever, so I guess I had the idea that Corky would go about his daily life just like Krusty does in Springfield. To learn that he was just the station’s weatherman (no offense to any meteorologists in the house) was kind of disillusioning.

I just found a nice little video of Jack Miller looking back on his days as Mr. Patches. It gives somewhat of a feel for what his show was like. 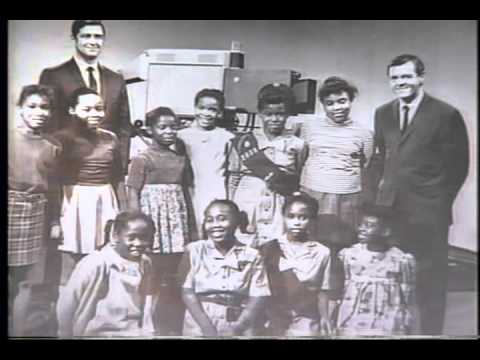 Happy The Hobo. He hosted a show called Happy’s Place from 3:00 pm - 5:00 pm Monday-Friday on WFFT-TV 55 Fort Wayne. I even appeared on it once. He effected my sense of comedy long before MST3K existed. 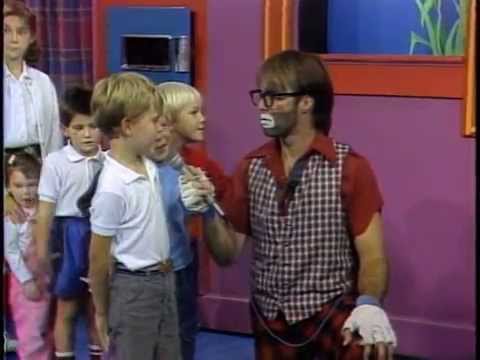 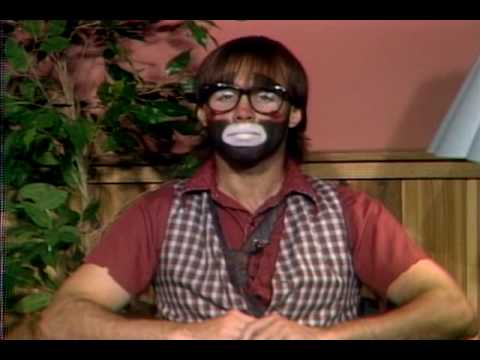 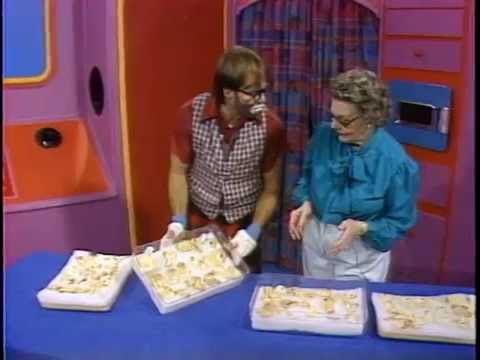 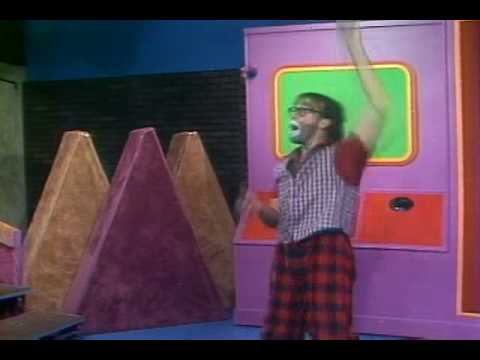 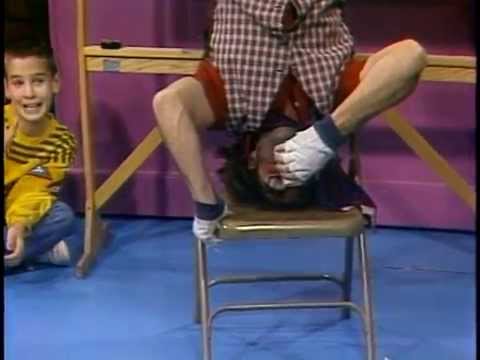 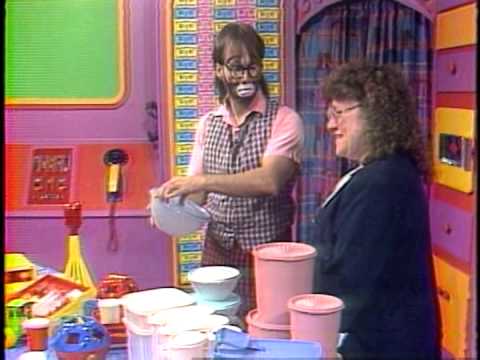 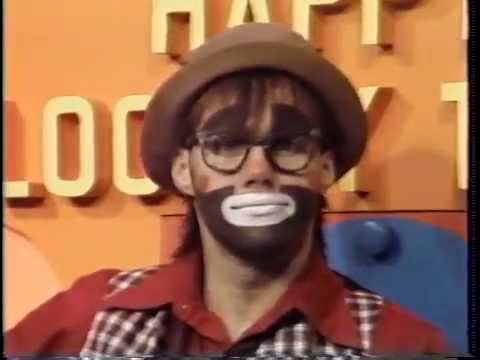 I, too, grew up in Denver where we had Blinky the Clown.

I’d also watch WGN so I could check out Bozo the Clown, who would introduce me to Transformers, which would eventually lead to me meeting my wife at a Transformers Convention. So in a very roundabout way, I have Bozo the Clown to thank for my marriage. 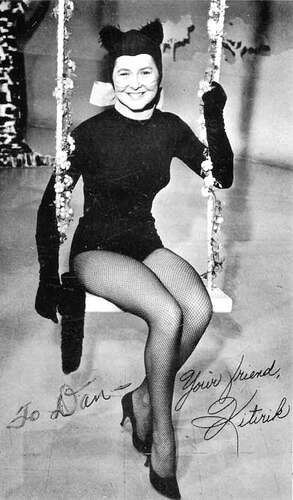 Seriously? Two and a half hours, five days a week? That would be a grueling schedule. I really enjoyed those clips. The guy was a good juggler and you could see some Robin Williams and David Letterman influence in his comedy. I hope kids shows like this still exist.

We didn’t have a local clown. Instead, we had Cowboy Bob. 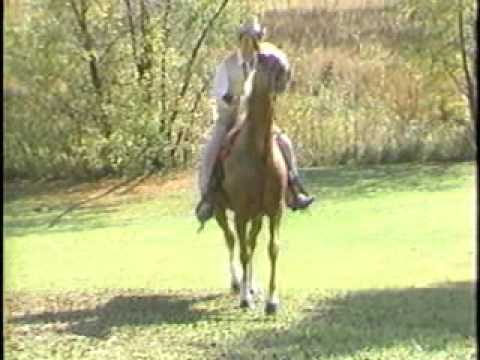 Cowboy Bob did have a giant talking glove friend though. 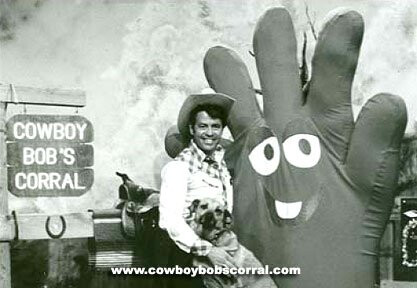 There was a giant boot that talked too.

Seriously? Two and a half hours, five days a week? That would be a grueling schedule. I really enjoyed those clips. The guy was a good juggler and you could see some Robin Williams and David Letterman influence in his comedy. I hope kids shows like this still exist.

Actually once I double checked it. It was 3:00 pm - 5:00 pm Monday-Friday. Two hours 5 days a week. Still respectable. Sorry for the mistake. 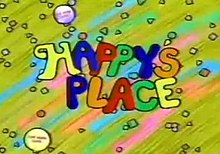 Happy's Place was an afternoon children's television program that aired on WFFT-TV Super 55 Fox in Fort Wayne, Indiana in the 1980s and 1990s. The program was known for its two-hour block of children's programming (in later supplied by the Fox Network) that initially aired from 3 to 5 in the afternoon. In the mid to late 1980s, programming included DuckTales, Inspector Gadget, The Smurfs, He-Man, Saber Rider and G.I. Joe. The original program was called Happy's Hour which began broadcasting in 1...

Growing up in Cambridge Massachusetts, we had the delightful Willie Whistle, who spoke only in a weird high-pitched whistle-like voice. Impossible to understand, there would usually be someone talking with him and translating as he went along… 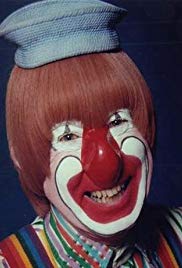 Me doing it Clown Style. 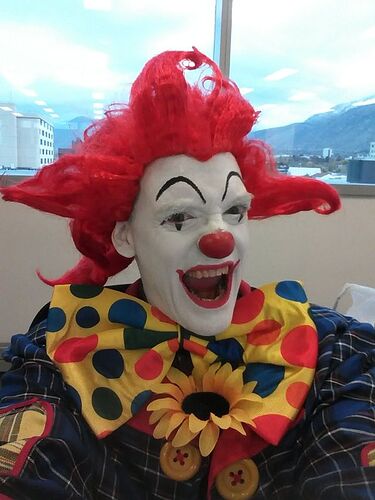 “If you should DIE before you wake…!”

I never liked clowns, even as a kid. I think it was all the chaos and noise and grotesque makeup and costumes that made their shows an overwhelming, rather than fun experience.

But we had J.P. Patches… I remember going to a live show with the fam, and dad laughing about something Gertrude was doing. 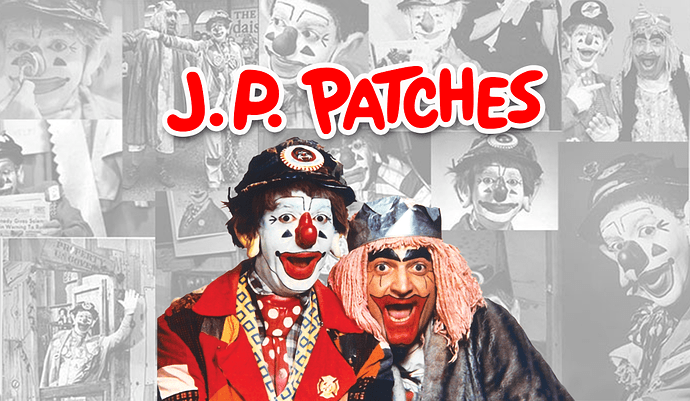 The J.P. Patches Show ran on KIRO-TV in Seattle from 1958 to 1981 and broadcast more than 10,000 episodes in it’s 23 year run! Just about every kid who grew up in the Northwest during that time tuned in as Julius Pierpont Patches, Mayor of the City...

Colorado kid here. Blinky was as common in the household growin’ up as Sesame Street and Mr. Rogers.

The man worked. Clearly, he really loved what he did.

The man worked. Clearly, he really loved what he did.

He was everywhere in the 1980s when I saw him. And he was a presenter that actually seemed to enjoy being around the kids. Looking at other folks’ posts, it seems the weekday kid’s shows are now a thing of the past.

Closest clown related thing I remember growing up with was Cal Worthington and his dog Spot. Also, as a kid I could have sworn instead of “Go See Call” they were saying “pssycow pssycow p*ssycow”.

In my hometown, there was a clown named Tinsel who was always around at the farmer’s market.
I swear, this clown never smiled and I don’t think it was part of his “act”. This isn’t even a judgment on him, frankly I had no opinions on Tinsel, may very well be a nice human being but I never got the impression that he enjoyed being a clown. Clearly he must have though, to keep doing it. It just… never showed on his face.