Finally drove myself to and from work, after about six weeks of carpooling. Without incident! Zat felt gooood!

And used my remaining vision insurance for this calendar year to have a set of Ray Ban black eyeglasses made, with Anti-Reflective Coating (but…grrr…I didn’t feel like spending the extra for photochromic treatment in addition to the AR coating). So, I’ll use my photochromic (“Transition”-style, although Transition is just one company of many nowadays who makes photochromic lens treatments) glasses for everyday use, and keep the anti-reflective ones in the car for use during the dark months.

They look kind of dorky, like Vincent in Color of Money, but just black frames, you know, like the kids were wearing. They’re fine! Do they blow my mind? Dunno. But they’re fine.

That will be handy now that it’s plenty dark during my early morning commute and I get bothered by headlights and stuff. Bothered as in Chris Walken in Annie Hall? No, no imp of the perverse. Just they annoy me, headlights. Mind you, I never, ever drive without my own headlights on, regardless of time of day, but I’m not some dillweed with idiot stupid sucky headlights.

Hey @DAV…I’m sort of shopping around for either some sneakers/trail runners or comfortable loafers. If you feel like it, can you tell me the make/model of your loafers from your picture from recent? That’s something I could definitely wear around town after work, change out of the heavy steel toes, give my feet a rest.

Oh, and as I mentioned in the Computer Machine Gadget thread, I received a new duplicate of my old notebook, popped in the SSD from my broken one, and everything is just aces. From opening up the box of the new one, to exposing the mobo, it couldn’t have taken ten minutes since I opened my door to grab the package to firing the new one up with all my stuff on it.

I’m fast with a knife! Like Salozzo The Turk! And with a screwdriver! What can I say? Don’t have the icepick down, but small knives, tiny screwdrivers, plastic spudges? Oh yeah.

AND one of the drivers actually said he enjoyed my dice slang call outs…I think only a few people get those. And this was one of the more obscure ones: “We’re counting down from five, fever! Five minutes!”

If you feel like it, can you tell me the make/model of your loafers from your picture from recent?

They’re actually slippers with a sole that means bidness, so they’re loafier than loafers, but don’t slip like slippers. I frequently forget that they’re not shoes and wander off into the world with them. 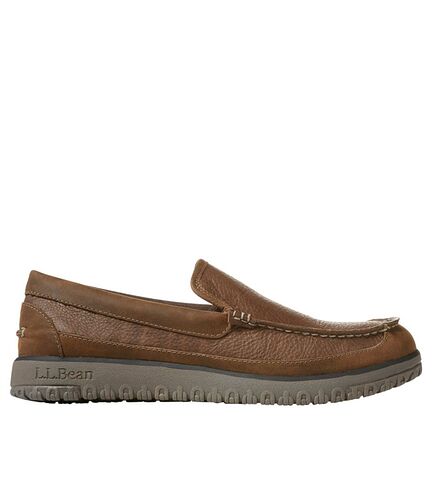 Find the best Men's All Week Slipper Mocs at L.L.Bean. Our high quality Men's Slippers are thoughtfully designed and built to last season after season.

I didn’t pay that for them, they were a Christmas gift.

They’re actually slippers with a sole that means bidness, so they’re loafier than loafers, but don’t slip like slippers. I frequently forget that they’re not shoes and wander off into the world with them.

Ah. Gotcha. Thanks. I have been looking at some LL Bean proper loafers which seem adequate.

I forgot slippers even existed…although they are nice…when they don’t slip, that is.

/* eta BAM! These look like they’ll do. Lands’ End All Weather Mocs. Like most if not all of the members of my logistics/dispatch team, we all complain about our feet. Constantly. Feels like a slipper, looks like a shoe! I’m hoping. Not ready to pull the trigger, dithering between some more traditional light-weight trail shoes…but…it might be an option. And I can wear these with a 3/4-lenth raincoat without looking like a dork or a Highlander.

Being able to commute with my own car, I can leave something like this in the car and swap out after work. Very good convenience.

Yes, I know a single-driver commute is not ideal, but unfortunately, that’s the world we live in, at least in places without comprehensive public transportation due to ad-hoc or defective city planning. */

I killed three mice within the span of about twelve hours.

Yes, I feel proud and good. Just like a young man coming in for a quickie. Strong enough to beat the world.

Finished this puzzle. Took longer than I thought it should… 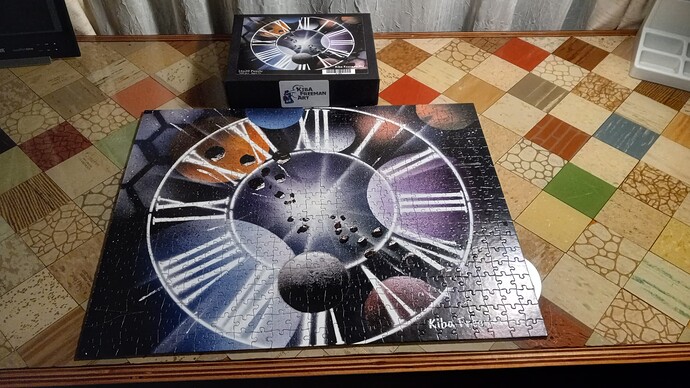 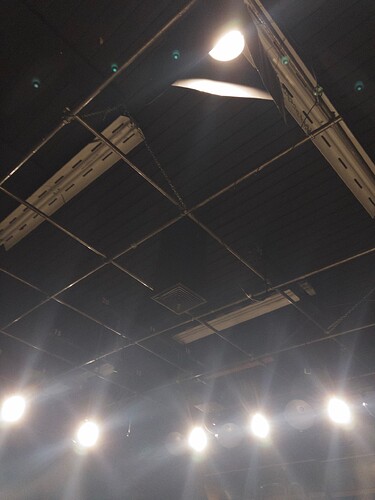 Damn. I RTFM and my new highly technically advanced and totally expensive Timex Expedition Chronograph watch (it’s an inexpensive analog watch that includes a stopwatch/chronograph)…is actually down to the second pretty precise. Apparently. And the chronograph has a subdial going down to 1/20th a second (as opposed to the more typical subdial to measure hours, in addition to the minute-measuring subdial) which is kind of useless to me, but whatever.

It only took me about five hours to get the adjustment right.

Well, you know, it’s accurate to the second, anyway. Yes, those are correct uses of the terms precision and accuracy.

/* It is a pretty slick watch, although I prefer the Casio MTP4500-1AV, which needs a new battery, but the Timex Indiglo feature is kind of…neat, I guess. I’d much rather have long-lasting lumen on the hands and subdials, but one cannot choose, it appears.

And once I reset the chronograph subdials, and got my timing down, it keeps good time, I guess.

It’s an old man watch, I guess. The stock strap is a dark brown suede, and the face and bezel are black.

Matches my personality, I guess. */

Got almost all the decals on the top of my voyager model, probably 10 hours of work just on the decals so far and probably another 10 to go to get the bottom and sides done.

Got a few details left to flesh out, but just happy to have even gotten this far; been awhile since I’ve had the attention span long enough to get close to finishing a painting 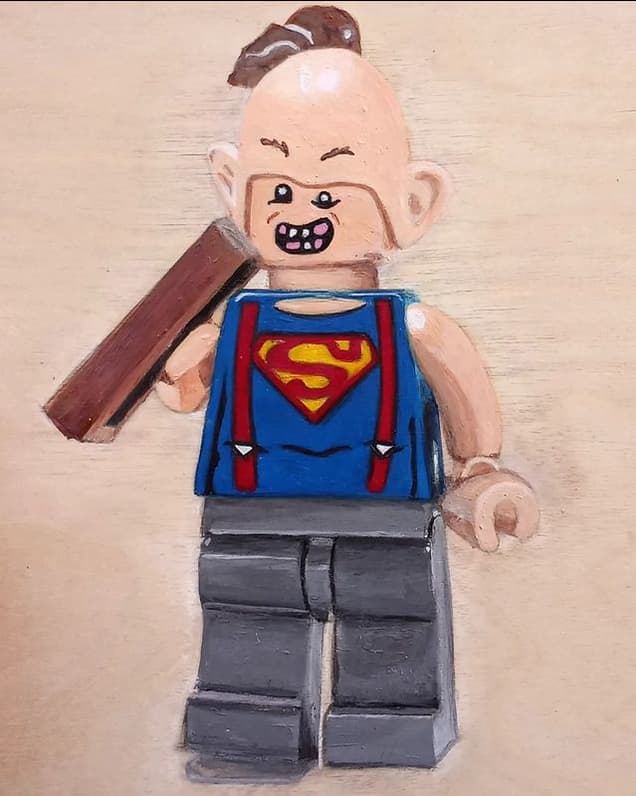 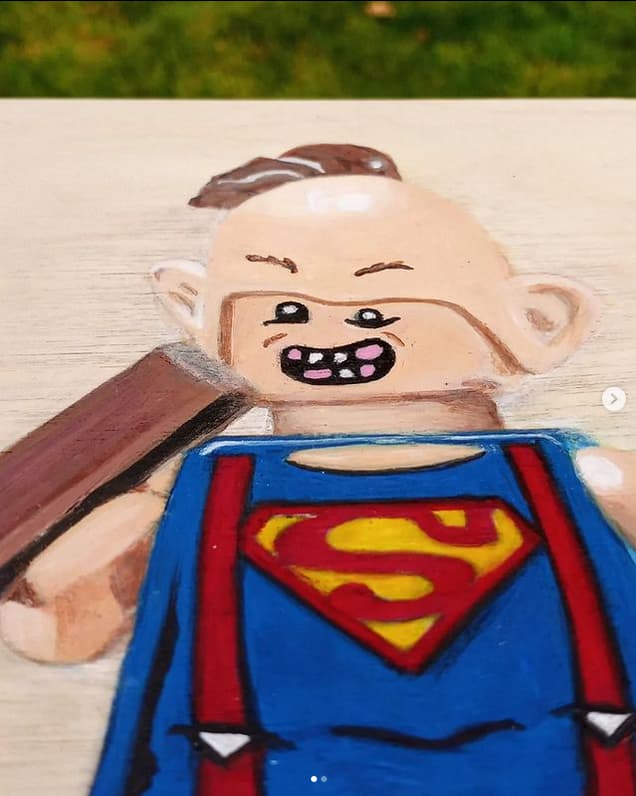 This model of Voyager has taken about 10 times longer than I thought it would at the start, but I now have all the decals on. After the clear coat dries for a week I’ll think about going in with a fine Sharpie and coloring all the little windows in black, but I might not… 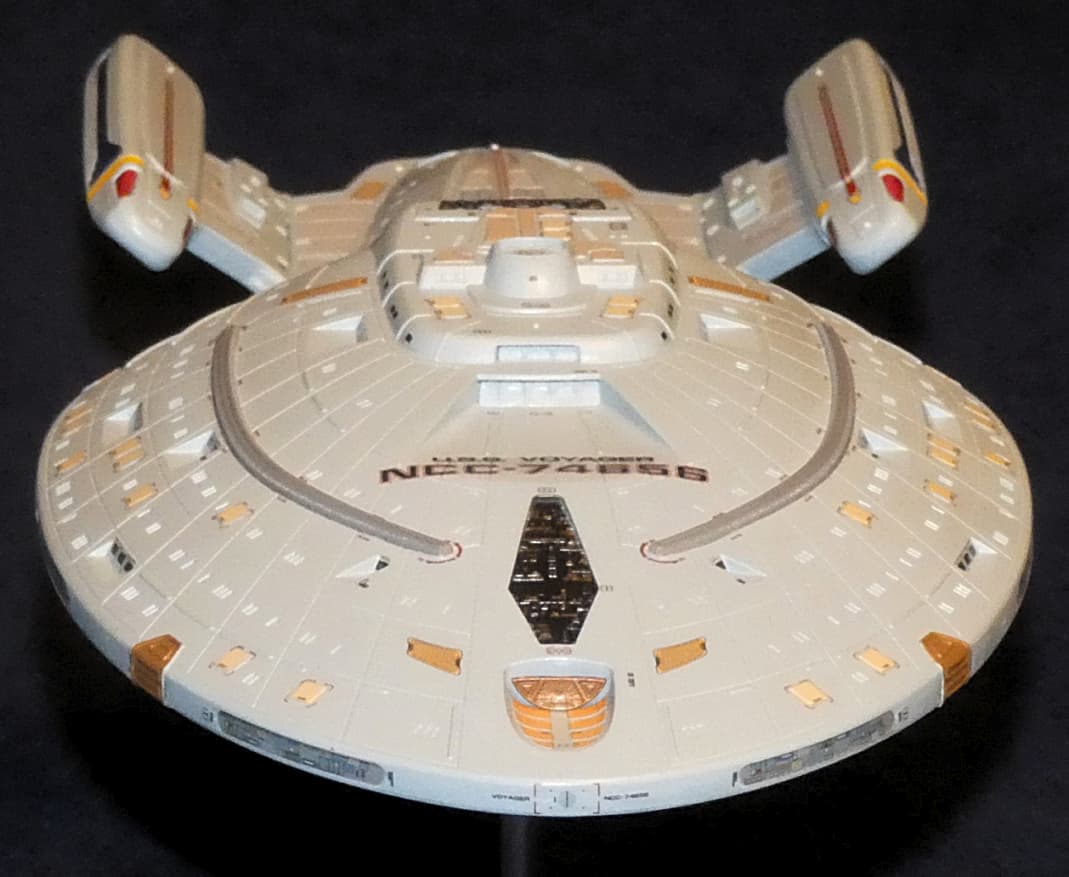 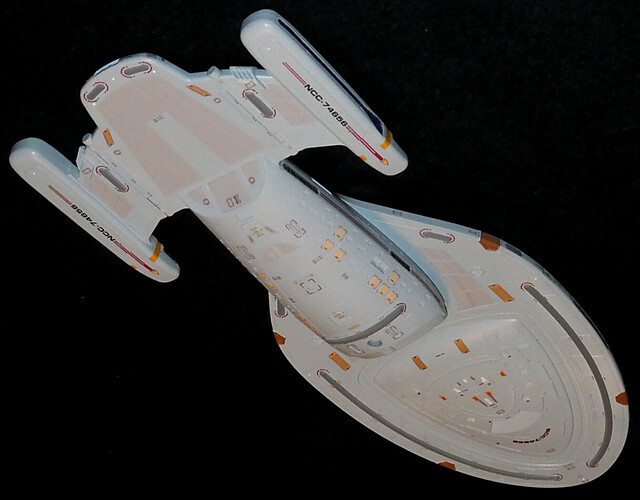 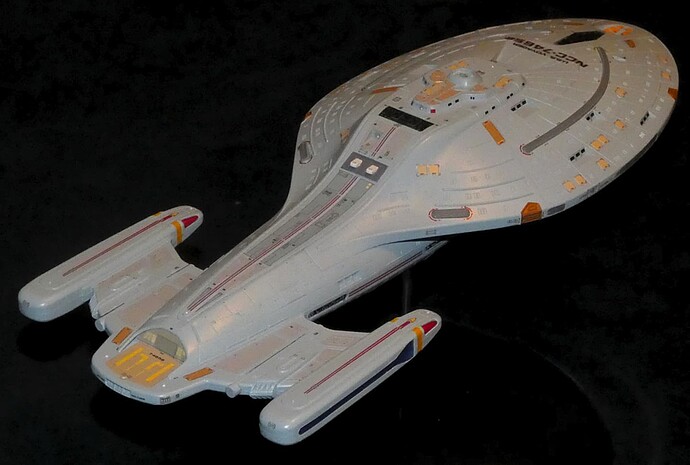 Went in to help out a severely understaffed crew today, managed to fall by the UPS Store to return a few things, popped in to the drugstore next door to buy eight fresh mousetraps.

GirlMax wasn’t working today, so didn’t have to deal with that whole shenanigans, but Sherina was, running entrance yard marshall with me on exit, so we had some laughs over the two-way radio.

Got to use my new calfskin leather work gloves for the first time, and they’re fine. I think the stitching about the fingertips will wear out, but they always do, and these were a pack of three for like $16, so, a bargain.

MOST importantly, I only caught a finger in a mousetrap while baiting it once. Yes, I usually go none times getting bit by the kill bar, but not bad for a drunk old blind man.

Got some supplies to make pens, made my first one today.
Kind of a sacrilege to turn wood on a metal lathe but I’m not buying a wood lathe just for pens…

It came out OK, hard to make organic shapes on a metal lathe, I’ll have to make some kind of tool rest for turning by hand. One thing the metal lathe is great at is making the square blocks of wood into perfect cylinders before you put them on the mandrel to shape them.

Wood that comes with the kit is kind of weird but good for practice.
I plan to use the pen parts to make some all metal pens, one brass and one aluminum.
They are re-decking the battleship NJ and selling the old teak wood, bought some of that and plan to make a couple pens from it.

Cleaned two of the fridge door’s shelves. Will do the lowest one as soon as I finish breakfast. Cleaning projects are always so intimidating that I find they progress better if done in little every-few-hour nibbles like this. I may even move on to the main part of the fridge tomorrow, if work doesn’t leave me too tired.

I’m throwing away all these damn packets of crappy neon-yellow mustard and other c2012 condiments that MR_Potroast insists on hoarding, too! He’s out of town and can’t stop me! [evil laugh] I’m the god I’M THE GOD!!!

Made a couple more wood pens and then did what I bought the pen making stuff for in the first place, made an all metal pen from aluminum.

Was thinking I’d do an aluminum one and a brass one but doing the aluminum one showed the limits of my current tools, took a lot of extra work and way too long to get the holes the correct size for the parts.

But I did pull off the lathe trick you can do with metal parts where you can make the seam disappear. But the pen mechanics are not as accurate so when I turn the top to extend the pen you can see the seam. 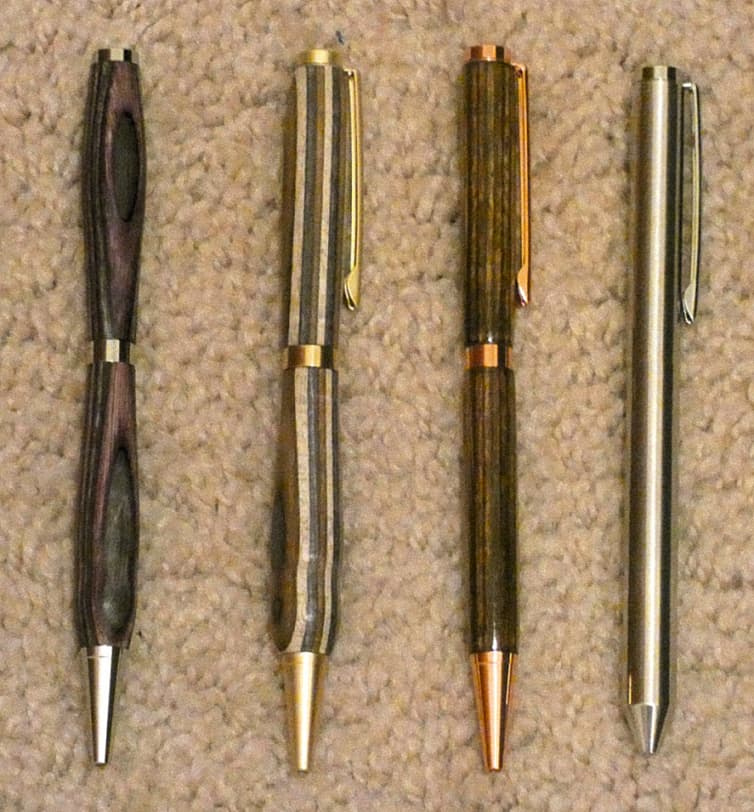 I think I’m ready for when the deck wood from the Battleship NJ arrives.

I think you’re a sorcerer of the very best kind!

Very inspiring to see someone actually create, and with skill and verve.

My big accomplishment? Well, it’s pretty stupid! So it’s that going for it, which is nice! But I decided to take another day off from work to get a bit straightened out in terms of housekeeping and a general mood adjustment.

It’s officially autumn here: rain, fog, gray skies, all that. Takes a bit of acclimation to enter the season with all gears meshed. 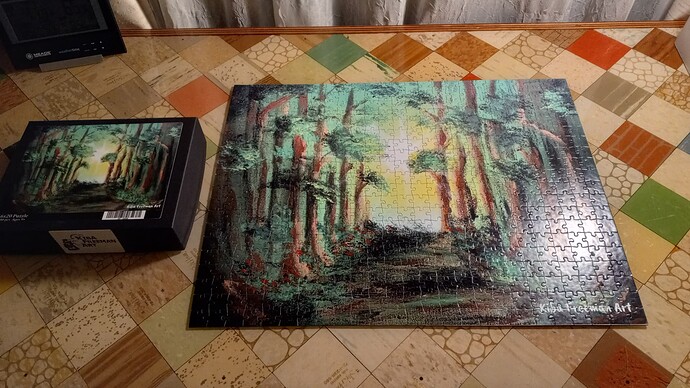 I have no artistic ability whatsoever, but I love to paint. So paint-by-numbers it is. Got a whole bunch on super clearance a month ago; finished the first one and hung it up at my office.

Trust me, it looks better from a distance! 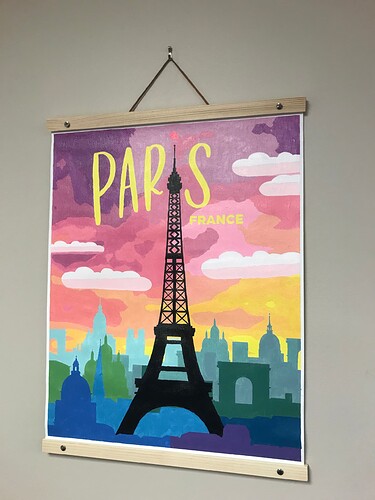 (speaking as an Art major) Artistic ability is a lie; drawing and painting are learned skills like any other – like writing longhand, riding a bike, or cooking. Some people take to it easier, and some may have a higher ceiling than others, but it’s not inherent in some people and not others.

But since a lot of us do not have the time to practice a lot, or just have higher-priority things we want/need to do, paint by numbers seems like a good way to do what you like. This looks great!

Not only was an AMZN van stopped right in front of my place when I got back from work, it was this super-cute driver I know who drives out of my station. Now she knows all about my secret lair! (At least a few others driver recognized me while making deliveries in my neighborhood).

And not only that, she delivered a black NATO wrist strap for a watch, which I immediately popped on!

So now I’ll have something to chat her up about, although I’d be shocked if she weren’t married or in a relationship. I just like to flirt! It’s harmless fun.

Check it out! Much better than the suede leather original strap…at least as far as being durable and I hope pretty resistant to sweat stains. Also, NATO straps don’t cause your watch to fall off in the unlikely event a springbar breaks.

Bad picture, but that’s about as good as I can right now. Anyway, you get the idea!

$9.95, and it came with a little springbar tool, plus two extra springbars that seem to be of acceptable quality should I need some more. 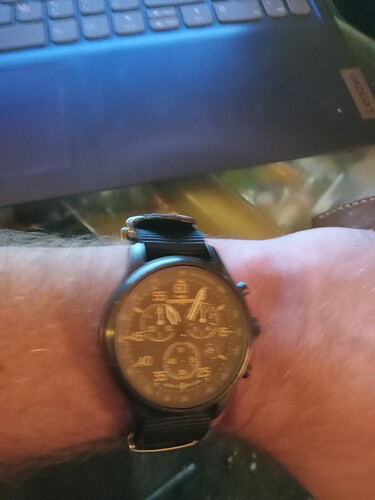