Just got invited to be a product reviewer on the ol’ Bezos site. I find the capitalist conglomerate to be in many ways an unfortunately necessary evil, and try to use it as little as possible, BUT I’m also poor and therefore I like free stuff. I’m also not immune to a little ego stroking so telling me that I’ve been picked special because I’m so good at writing reviews…well, yeah, that’ll sucker me in

Finally my detail-oriented pedantry is paying off

Why don’t you tell us how you REALLY feel!

30min winds, occasional downpours, and playing “puddle or pothole?” before I stepped in water.

But I made it. With a new personal record.

And I have NO IDEA how I did it. 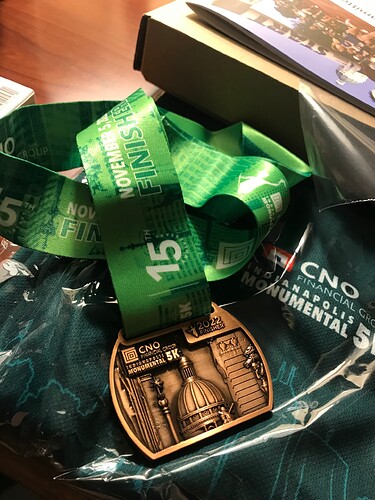 My plank from the Battleship NJ arrived, cut about 6 inches off one end and from that it looks like I’ll be able to make 6 to 8 pens.

Teak is normally very hard, this old beat up deck plank is easy to cut and with the grain opened up so much sanding and polishing still leaves a rough surface. And it smells pretty bad while cutting it so I will not be volunteering to make lots of pens for the museum.

Made one pen only using carnauba wax, will probably make most this way with a couple using CA glue to make those smooth. 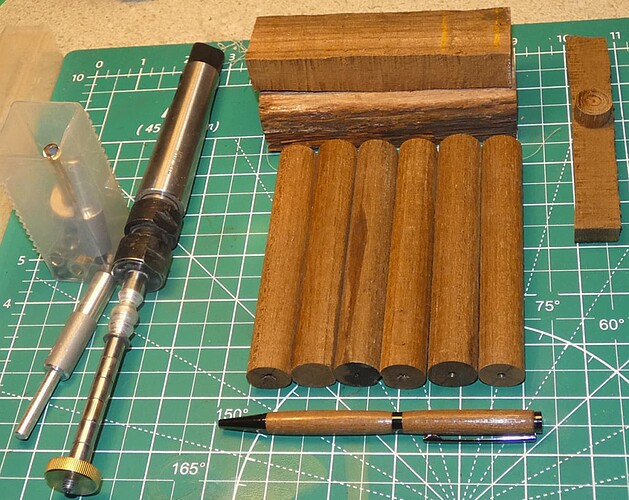 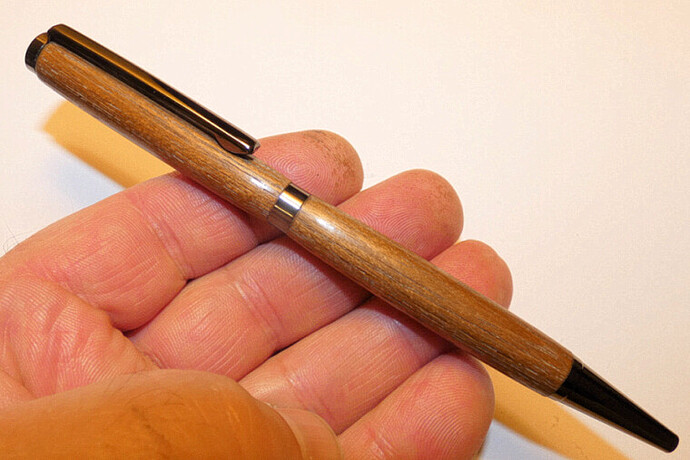 That time every 5 years when I get a re-issued credit card and have to update roughly 4,684 autopays and subscriptions. Luckily most of them are through PayPal, but I still had a list.

Pretty sure I forgot something, but I’m still feeling vaguely accomplished looking at all the cross-outs.

I accomplished buying my mother a couple of Bloody Marys and some breakfast at a dive bar I favor, while I had two beers and two generous pours of Tullamore neat. And I had some breakfast food as well.

She did me a big favor and gave me a lift to the county courthouse today (no, I didn’t ask for the favor, but I accepted when she offered, just for the lolz), but I was surprised she let her apprehensions down and let me pick up the tab and relax a bit at a quiet bar for some food and conversation.

She’s turning seventy in a few days, and it was nice that she and I were able to have some light chit-chat and banter in an environment that she ultimately admitted was not so bad.

And I taught her how to shoot “street dice”: I think cribbage is more her game, as is gin rummy, (even though it’s been a while, last I recall I ran her up like three hundred points at gin rummy…I’m not super great, but I’m a decent player).

So, I “turned my mom on!” To an inoffensive dive bar, and to a harmless game of dice! And introduced her to my lawyer while we were walking to the elevator!

Well, I wouldn’t call this stupid, exactly, but it’s a minor tweak, or “lifehack,” if you will, that makes me happy.

I finally put the “regulation” Zippo insert back into one case, and the Zippo torch insert I left in another one.

No, I’m not that into the regular Zippo inserts (they’re decent for driving without taking your eyes off the road, until the striker wheel gets beshmutzt, but the liquid fuel evaporates pretty quickly…sure, the flints have to be replaced every so often [easy, no big deal], but starting from a brand new insert, I likely won’t have to fiddle with the wick for many years [major PITA, at least to thread it through just right when the wick is almost blown])…but they work, and I’ll keep this one as my usual carrying around one.

People sometimes get confused when they ask for a light and can’t figure out how to work the torch insert. You push the button, ya Steely Dan! Flame comes out!

And I got some new blends of pipe tobacco, including one called “Old Professor” which smells like…not an Old Professor’s library…but an actual Old Professor. Have only smelled it, not packed a bowl with it yet.

New toy arrived today. The BACtrack S80. Yes, I have a similar device hardwired into my car, but this is supposedly about the most accurate device one can buy for a reasonable amount of money. ($130, so, not cheap, but relatively speaking).

I wasn’t planning on drinking today, but I think for the sake of experimentation, I should consume 17 units of alcohol (i.e., the fifth of 80 proof Black Bush), wake up in the morning, and see what I blow.

I know I can blow clean to start the car after two bottles of wine the day before, and thirteen (12.8, really) units of alcohol in the form of beer was fine.

I’ll probably end up finishing the bottle at some point, especially as I don’t have to wake up early for work tomorrow.

Only thing is these are supposedly only good for about two-hundred (200) “blows” before whatever “recalibration”/verification happens in the company’s underground lair. So, I’ll have to not treat it as a party trick and not let friends and family blow on it wantonly. Tempting, though!

A Truffaut model with 400 blows would be good…but…I don’t think anybody really knows the limits of this devices accuracy starting with a fresh fuel cell. 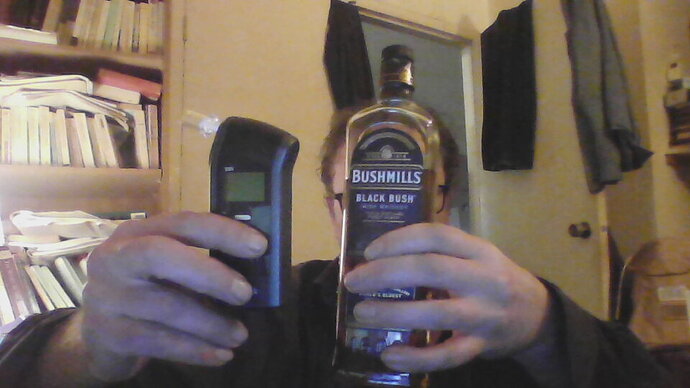 Not that good, would probably register as “failure” on the car’s blow-n-go!

Finished this guy tonight. It was one of the most challenging puzzles I’ve ever done. The entire border solid black pieces (other than 5 pieces). Everything was some combination of black, red, or orange.

And that was before one of the pieces went thought the washing machine (see my post in the gripe thread the other day), and one piece just went missing. Luckily, both were solid black (shocking, I know!) so the wife was able to replace them with an xacto knife and some craft foam. 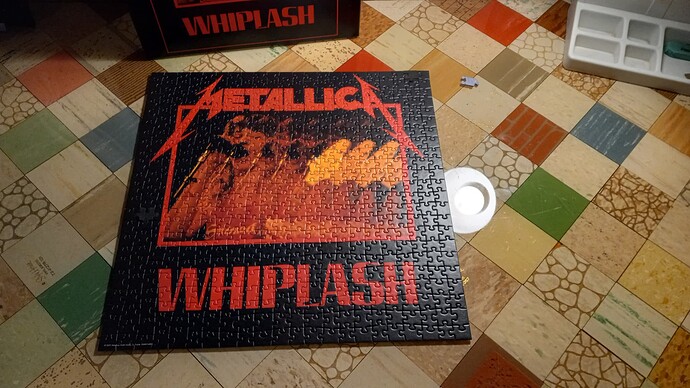 That’s good, because I no longer have a pair of functional cans. But now I will!

/* edit: Yeah, baby! At, I think 55 Ohms, just about any little device will supply enough voltage. So, while I think my Mackie 1202VLZ mixer will function OK as a headphone “amp” (among the other things it does, like mix, for example!), I’m not going to worry about a headphone amp for just around the house or whatever.

Only small gripe is that, true to their roots as a staple of workman-like studio cans, they aren’t foldable or anything…I wouldn’t put them in my Raptor bag without a hard case, but I don’t really listen to music when on the go, anyway. */

/** eeta: meh, the cans are OK. just regular, flat response without a lot of razzmatazz. I should have gone for a replacement pair of Grado SR-60s or SR-80s (lost my one pair of Grado SR-60s on a bus years ago), but these will do. TBH, I kind of despise wearing cans unless absolutely necessary, but having the option is nice. Probably stop by Harbor Freight and buy some kind of cheap utility box to keep them in for on the go (taking breaks/lunch in my car, that could be kind of sweet to just help dissipate the chaos in my brain and chill out with some dark sunglasses and driver’s seat tilted all the way back. **/

Just got my last houseguests out the door and on the road. A full house over a full weekend and the worst thing that happened was a Mike ‘n Ike’s mishap.

Anyhoo, I figure that was an accomplishment, and if I can get all the freaking laundry done, we’ll count that as another! 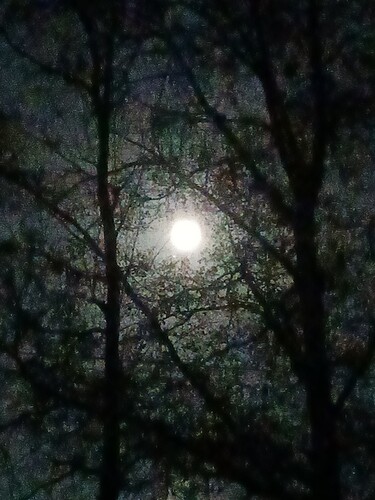 That reminds me that I haven’t added anything to the Nature Photos thread in weeks! I’ll have to get back on that…

So, while decorating the Xmas tree on Thanksgiving night, my roomie’s mom (my adopted mom) dropped and broke what is my most treasured ornament; a handpainted Sherlock Holmes globe my dad had made for me the Xmas before he died. She has neuropathy / rheumatoid arthritis and her grip just gave out. A complete accident and she was completely heartbroken. While I was in the other room convincing her I wasn’t mad at her, my roomie and her Dad swept up the shards and vacuumed up any bits of glass in the carpet.

Later that night, inspired by a friend of who was handmaking their own ornamanents, I thought, “If he can do that, then I can do this!” So I pulled out the garbage bag, hand sifted through it for the shards, bought some exhaustively researched craft glue, and spent a week piecing it back together.

And I darn well did it!! Two little chips are missing from the back, and there was one shard that went AWOL to the trash or vacuum. I filled in the shard by cutting white tissue paper, shading it as close as I could get to the surrounding colors, and taping it in before I sealed the globe.

Woof! Super stoked I pulled it off!

Dude! That is neither mundane nor stupid!

That’s pretty common in this thread. Some guy upthread made Monticello out of toothpicks just to let his pals destroy it.

We MSTies are a humble people.