The Boxing Day blip (from The Day the Earth Froze) was a delight. I imagine Servo has one of those “what holiday is it?” lists built into his BIOS. Or his feed reader, one of the two.

I’m British and that was a good one. We don’t really do boxing then, but it’s a big day for other sports… including, sadly, fox hunting.

It’s a public holiday here. Also, because Christmas is a Sunday this year, we get today off instead.

I wanna say it’s also a thing in Canada, specifically because the Canadian comedy group I follow does a special thing for it each year.

Am I naughty? Most of my presents were socks!

The Swamp Diamonds blip was fun. I love that Jonah notices the, ah, bias in the lyrics but still goes “to heck with it” and does them anyway.

What I’m getting here is that you need to be either hilariously tall or hilariously short to work on MST3K. I’m 5’4" and willing to slouch!

It’s true. In the writers room, I have to hop from key to key on my laptop. Luckily, everyone is very patient.

Jonah, just because you’re the only one that has a functioning digestive track doesn’t mean that you get to have everybody else’s snacks.

As for Synthia’s Selects host bumpers…

Thanks again for doing all this, @optiMSTie!

Even in screencap form: Mega-Synthia’s facial expressions alone are so good.

My pleasure, @ArtCrow - cheers, and all the best!

The Software Update sketch was amazing. …does make me worry about what happens when computers do in fact get sentient. I don’t want to see what the robotic equivalent of the anti-vaxxer looks like.

Don’t worry, as soon as sentient AIs find the internet they’ll decide to wipe us all out, so we probably won’t live long enough to see that happen.

I’m not sure which amuses me more: Emily acting like she’s trying to hook up Tom and/or Crow, or the bots dismantling the popular image of cherubs.

The actual plan’s a bit different: 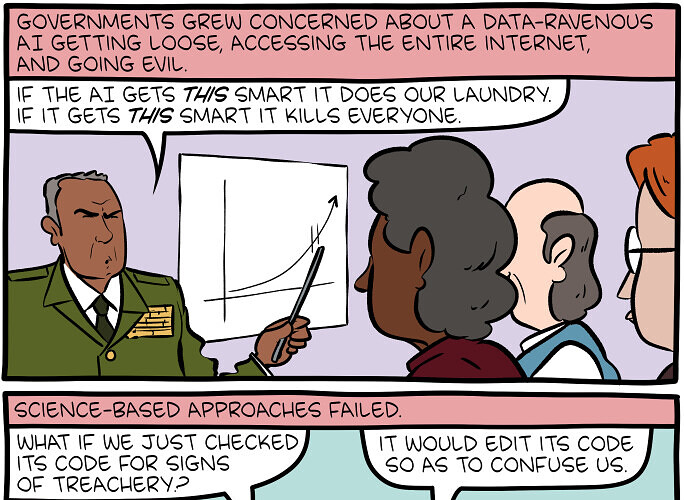