We are days away from NBC’s revival of Night Court.

Night Court was a show that during it’s original run aired after my bedtime but both me and my sister would sit by our doors to listen/watch what we could.

Sure a few jokes went over our kid heads, but the quality of the show was that high. It became (along with old late night episodes of Doctor Who on a local independent channel) one of the shows that when I finally had a TV in my room, I would watch every week.

I was interested when it was announced they were looking to relaunch it, and I think they originally stated that while Melissa Rauch was attached it was behind the scenes and it wouldn’t be a continuation. Clearly that changed somewhere during development as she will be Harry’s daughter reclaiming her dad’s legacy in the judges chair.

The clips I have seen so far, don’t feel like they are hitting the mark, but close enough I will be giving it shot. Heck I likely would simply for John Larroquette.

It is unfortunate that so many of the old cast has passed, so Christine, Mac and Harry can only appear in spirit. There is room for other to show up, but I just hope if they do it’s done smoothly and not in either, “who do we cameo this week” or “quick it’s the season finale, start calling their agents”.

Here’s to hoping Richard Moll shows up and Bull is now the Mayor of New York.

What are the other thoughts on this?

AV club said it is terrible in the beginning and improves as it goes on. 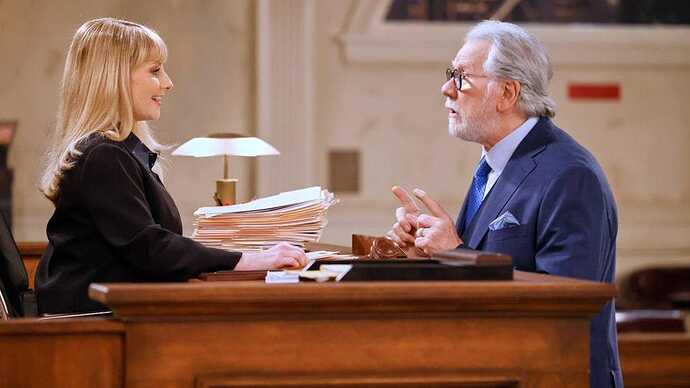 Thirty-one years after going off the air, Night Court is back, with original star John Larroquette and The Big Bang Theory's Melissa Rauch

My verdict: Meh. It was the cast that made the original magic. With most of them dead and only John Larroquette returning, I can skip it.

I totally grew up on Night Court and it was only upon revisiting it as an adult that I realized how very surreal the show was. I mean, obvious, right? But I guess I was at the right age where it didn’t occur to me how very impossible so much of it was. Like… the building itself doesn’t make sense. There’s a window in Harry’s office, but the room is not oriented in a way that would allow for that. That window should have a view into the custodian’s closet.

Anyway, I hope that subtle sense of impossibility continues with the new show.

I loved Night Court growing up. I can’t imagine a revival in this day and age. I have to agree that the cast was a large part of what made it work.

I hadn’t even heard of the revival. I guess I’ll have to give it a shot. But I’m dubious.

I have to admit I’m enjoying the new Quantum Leap. The Swamp Thing series was pretty good, although I’m not too sad or too surprised that it didn’t last longer. I haven’t watched either the original Kung Fu or the reboot. But, for the most part, these rehashings of 80s shows just have not worked out.

Now, I can think of one 90s show that I’m very glad they brought back. But they did it right. With the right people involved.

And I’ve got some hope for Babylon 5, assuming that survives the network buyout and all.

But Night Court? That’s a very delicate balance to get right, and I’m not sure it’s even possible. That show was very much a product of the 80s.

I always enjoyed Night Court back in the day and I have been looking to seeing what this new version is like. I agree that it sucks that more of the original cast is no available to make even a cameo appearance. Does the new judge need to be Harry’s daughter? Probably not, but if done right it won’t hurt the show.

My biggest question is how much of the womanizing that was part of Laroquette’s character is still there now. It was not an uncomman character trait at the time, but would be out of place today, even before you consider how he has aged.

Yeah, I think #Metoo kind of makes Laroquette’s character too unpleasant to work today, but if he isn’t the ultra-sexist Dan Fielding, what’s the point of bringing him back?

Here’s to hoping Richard Moll shows up and Bull is now the Mayor of New York.

Pretty sure Richard Moll is currently living on Tomb Island, a rocky crag perched at the edge of the world.

I ‘d have Dan telling stories about his past romantic conquests, and nobody believing him because he’s just this cuddly looking old man now. And he just keeps at it, and everyone is like “awwww, Old Danny was such a ladies man, weren’t you, you cutie?”

I loved this show ! So many moments that are truly classic.

Really looking forward to this, but my expectations are tempered by the whole “reboot” culture…whatever happened to new writing?

Anyways, the original Night Court actually had a recast that worked; Markie Post !

Also, Roz was better than the little old lady whose name I forget. I mean she was fun too, but Roz was so much better.

I’ve learned to let the past be the past when it comes to nostalgic TV show revivals. Unless we can go back in time to the 1980’s, I’m not interested.

Does anyone remember the attempt at reviving Murphy Brown? It wasn’t even a bad show, it was just clear that era was over.

Yeah, most of these shows are specifically of their time (which was why they were so popular in the first place.)

I remember when they tried to revive WKRP in Cincinnati. That was only about 10 years after the original ended, but the magic was already long gone. Music and radio had already changed too greatly in the intervening time.

I was skeptical when they announced yet another old show reboot. Things I’ve heard since have not changed my mind.

What made the old show work was the chemistry amongst Harry, John, Richard, Markie, and Marsha.

Harry had that child-like wonder to sell a character like Stone. Larroquette could be that slimy guy you wanted to slap one minute and show a softer side the next. And the pair of them bounced off each other so well.

Dan Fielding doesn’t work in 2023 (his shtick was already getting problematic in the 1990s) so I’m not sure what they do with Fielding now. I really hope he is the DA now, so maybe we don’t see him as often. If he’s still a lowly assistant DA working the night court thirty years on … that’s just sad.

Also, Roz was better than the little old lady whose name I forget. I mean she was fun too, but Roz was so much better.

There were actually two little old ladies, Selma Diamond and Florence Halop. Both died while the show was in production. Selma Diamond was a trip. She had that role nailed and she worked so well against Richard Moll.

So yeah, I’m not sure I want to revisit this one. Like Quantum Leap, I think I’ll stick with my old DVDs.

Huh. They must have merged into one in my mind.

But Roz could make you laugh with just a look.

I think it’s telling Marsha Warfield decided not to return.

Ok, now I’m watching this (which is NSFW) on YouTube. She is one talented lady.

Huh. They must have merged into one in my mind.

But Roz could make you laugh with just a look.

I think it’s telling Marsha Warfield decided not to return.

Roz became the voice of reason in the group and it was an interesting relationship they developed between Roz and Dan.

Marsha sort of disappeared in the late 90s though she has made a bit of a comeback on 9-1-1 of late.

Dan Fielding doesn’t work in 2023 (his shtick was already getting problematic in the 1990s) so I’m not sure what they do with Fielding now. I really hope he is the DA now, so maybe we don’t see him as often. If he’s still a lowly assistant DA working the night court thirty years on … that’s just sad.

I absolutely agree that 80s Dan doesn’t work with today’s sensibilities. But I can tell you that he is not the DA in the revival. Instead, the series description says that Harry’s daughter recruits him to be the public defender. Which hopefully also means his personality has matured and evolved since we saw him last.

Instead, the series description says that Harry’s daughter recruits him to be the public defender. Which hopefully also means his personality has matured and evolved since we saw him last.

Is that something to be hopeful for? What’s the point of nice and cuddly Dan?