So, I know it’s kind of early, but do we have any info on whether there’s going to a Turkey Day Marathon this year?

I know we’re getting so much wonderful content from this Kickstarter, but TD is such a big tradition I’d hate not to have one.

Oh, I can’t imagine there won’t be a Turkey Day this year. Joel wouldn’t do us like that.

I had asked a couple months ago about whether Turkey Day would be on the Gizmoplex in addition to its normal locales, and @ivan said that was the plan.

No. Turkey Day has been cancelled. No Thanksgiving for anyone.

You can blame Munchie.

They can use the theater, but Kinga forces them to keep the lights on. They don’t have silhouette privileges for this theater time

I’m looking forward to Turkey Day this year, I’m hoping it’ll be something special given that it’s the first year of the Gizmoplex. Maybe we’ll even start hearing more about the future of new episodes around then, it might be cool if they did a kind of pledge drive or something during the TD, maybe offering discounted prices for pre-ordering the new season or something.

I wouldn’t be shocked if ongoing revenue from the Gizmoplex isn’t enough to fund a new season, but it would be nice if the team could skip Kickstarter and do a more direct pre-order system. They wouldn’t spend as much on paying Kickstarter and on physical rewards, so the amount they would need to raise could potentially be lower.

That’s a nice idea @JudgeHolden
I would be willing to add another year to my Gizmoplex subscription at that time if there was a discount or other offer attached.

I’ve always liked to make an event out of it when we got those Turkey Day Marathons in the Shout Factory streaming era (I didn’t have Comedy Central, so the only Turkey Day Marathon I got to enjoy in the classic era was the one unofficial Thanksgiving Day marathon over at Sci-Fi Channel).

I can’t possibly imagine what’ll be in store when you factor the Gizmoplex into things!

I can’t possibly imagine what’ll be in store when you factor the Gizmoplex into things!

I gave up caffeine a long time ago. I may have to take up the gauntlet once again.

Join me. Caffeine is good for you, I swear.

That’s what it whispers to me, anyhow.

I believe it will happen today.

I don’t know how much YT saves of the marathon, but you can roll it back to the beginning.

Oh, yes. I did have my coffee today.

you can roll it back to the beginning

If you missed any part of the marathon, you can watch it on-demand in the Gizmoplex all weekend for free! 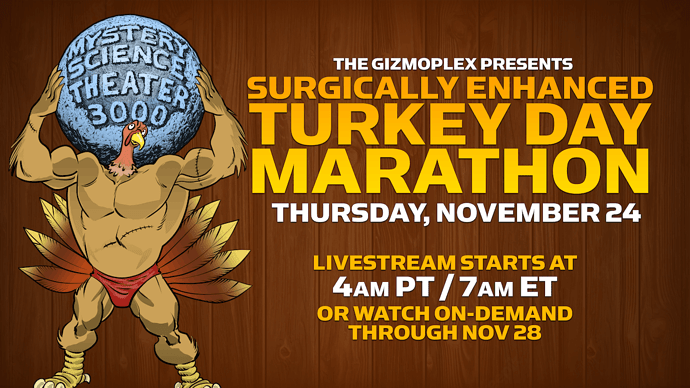 LIVESTREAM available beginning at 4am PT / 7am ET. ON DEMAND VIDEOS will become available as each episode airs. Join us on THURSDAY, NOVEMBER 24, to celebrate MST3K's most hallowed tradition: the annual TURKEY DAY MARATHON! This year, we've got...