I’m late bc of COVID, but this one was really, really strong. Much better than Yongary.

The brutal kaiju puppet violence throughout was insane. Woof.

Speediest of recoveries to you, skemlo, and all the best.

This episode was riffing gold it should be available to download today.

The gamera link is up to download! The new short is also available to view!

Just watched this one now, I’m a little behind

But I think I speak for everyone when I say I completely approve making this one longer and not cutting anything - where could you cut? The whole thing is GOLD!!! This season has been a lot of fun and every episode has been pretty strong, but there’s been some standouts too and this is definitely one of them!

I mean, they were on My Little Pony for crying out loud! XD). Just something to think about.

If you told me during the interview that you were part of that, I’d immediately lower my offer.

Did anyone else notice that the actor playing the chieftain of Wester Island was the driven-mad guy from Genocide/War Of The Insects (as seen on Cinematic Titanic)?

Oh yeah that was loaded with recognizable actors.

I didn’t spot Kôjirô Hongô (the foreman in Gyaos) and can’t find a credit for him at the Gamera wiki, but maybe (he used to be embarrassed by his Gamera roles and it took him a while before he’d acknowledge them). But Chico Lourant (sometimes known as Roland) is there for sure, along with his fellow Insects actor Franz Gruber (Dr. Williams).

There was a group of actors who showed up in Gamera films regularly in different roles. A few of them…

Daihachi Kita, who played the hotel manager who wanted the fish in Zigra, was one of the mechanics.

The cowardly photographer who gets eaten in Gyaos was one of the yellow helmet workers.

You’ll also find Col Sanders of Zigra fame (Sho Natsuki), and many others 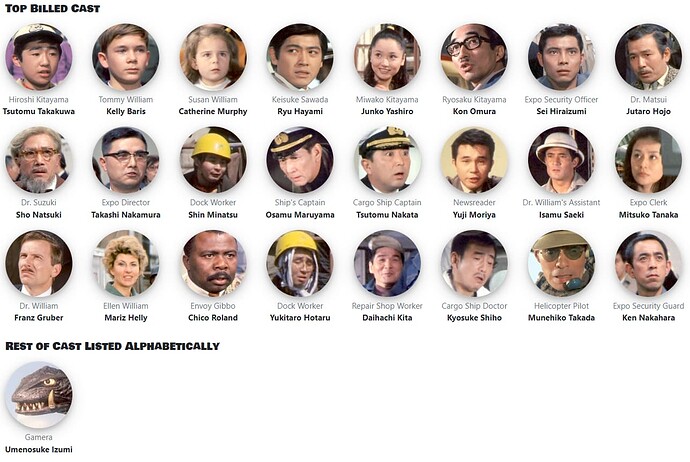 Gamera vs. Jiger - The Godzilla Cineaste

Ah, you know, I think it was probably Shin Minatsu I spotted, who has been in just about every Gamera movie of that era. I knew I had seen him before, but wasn’t sure if he was the crew lead in Gyaos or not. I seemed to recall that actor being a bit more handsome and leading-man-ish than the yellow hat in this film.

I went to take a look, and yeah that’s Shin, he was also eaten by Gyaos, and was the dolphin lover in Zigra and was in the first Gamera, and Barugon, so he was a Gams regular.

You’re right, Kojiro Hongo was more leading man handsome, he was the foreman in Gyaos, and the protagonist in Barugon.

Gamera vs Barugon is still the most connected MST3K film in the network graph, thanks in large part to the cast reuse in the franchise. I need to rerun the pull and possibly update my code, because it’s missed some connections like Shin Minatsu for Gamera vs Jiger.

were you using IMDB for that? Because their Jiger page is missing quite a few names, including Shin and Kita.

Yes, I use a Python library that scrapes IMDb. Some of the gaps in the graph are indeed due to incompleteness on their site listings.

One thing I stumbled across - Lurene Tuttle, who plays the judge in Untamed Youth, is also the reporter’s wife in Parts. She was a busy, busy actor.

Did anyone else catch the “Susan Rage” riff in Gamera vs. Jiger? It’s when they are trying to jump start Gamera. I haven’t seen that short riffed in MST3K or did I miss it? Rifftrax has riffed it and the riff in Gamera vs Jiger from Jonah can only be about one thing - The short “Don’t Get Angry”.

Just rewatched the episode. Came to it fresh. I liked it better this time. Still not my favorite this season, but this season set an exceptionally high bar. There are good riffs throughout, and the host segments (especially the drinking song) are a lot of fun. I think maybe part of it was how much they talked up how difficult it was to riff the whole movie without making cuts. It colored my expectations as I was watching. But they do a good job of finding fresh riffs for the repeated “action” and ways to fill the time when nothing is happening.

(Although there was still room for some comment about the whole “Okay, you two kids pilot a sub down the giant turtle’s throat. We’ll attach these giant high voltage cables. Just plug them in to his heart. You’re 13, so you should be fine…” scene.)

Definitely a lot better the second time around.

After all the buildup about how painful the extra length may be, it was unnoticeable to this viewer. Even the most obvious bit of movie padding was turned into an epic musical number from the MST3k crew. I did notice the jokes seemed a lot darker than usual, which may be due to the writers’ resentment, but since I like dark jokes, it was a great riffing, though I never thought I’d see the day where Irreversible is used as a joke for a Gamera film. Overall a silly movie that kept on giving, and a top-notch final host segment.

I did notice the jokes seemed a lot darker than usual, which may be due to the writers’ resentment,

On the MST3K Gamera featurette, some of the writers talked about how dark their jokes were for the original Gamera film, and they tried to tone it down for later films in the series. I guess giant meat-filled turtles brings out the darkness in everyone.

I’m a very squeamish person, I can barely stand the sight of fake movie gore let alone real moments (like papercuts), so while I’m happy no editing allowed scenes like Gamera’s Lament to happen, I’m rather thankful I serendipitously happened to be over on a different tab during the premiere of the X-ray scene, I completely missed the visuals.

Unfortunately that’s made me not re-watch the episode since out of fear of accidentally witnessing that real grossness.

So, for my downloaded copy, I scrubbed through with 0% opacity till I heard the moment, and cut it out. Linked below an excerpt of how I re-edited that scene, and how I’ll continue to watch the episode, as it should have been (thanks but no thanks rights holders, ugh.)

I totally get that. Good job putting in the edit work.

But I can’t help but think that now we’re just all avoiding talking about the elephant in the room.