SPOILER DISCUSSION: Episode 1312, The Bubble. (PLEASE NOTE: This thread is NOT the Open Thread Discussion for tonight’s livestream premiere) 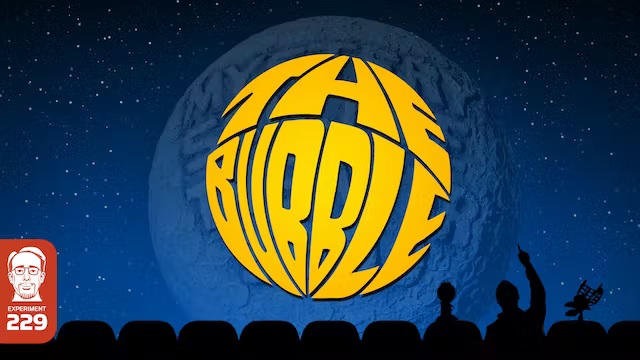 Here is your discussion thread for spoiler-filled thoughts, discussions, and observations on The Bubble!

This is your destination for discussing anything and everything about MST3K episode 1312: the host segments, the theater segments, the memorable quotes, the hilarious riffs, the feature presentation, all of it!

Remember: this is a spoiler discussion thread, so all points of discussion will not be spoiler-blurred. If you haven’t seen the episode, you’ll want to turn back now!

Even though this may not be a biopic about the Pop-O-Matic Bubble, let’s go!

A few (too many) thoughts…

I think if this were edited down to 20 minutes or so and given a slightly better ending (maybe show the world outside as an alien planet), it would make an ok Twilight Zone episode.

I agree - and I had so many questions (what was happening in the outside world, why were they grabbing people off the streets and taking them, somewhere, etc?), but apparently those questions were never answered even though the original theatrical version was nearly 2 hours long. That length was mostly 3D filler (throwing stuff at the screen and such) which was cut in a 1976 re-release.

I think the biggest problem is the passage of time was handled really poorly. You didn’t know if minutes, hours or days passed between scenes.

Just finished it what an awful movie, I wonder if the unriffed version makes more sense. And it was great that Joel burned netflix with a riff!

What an odd movie. It kind of just muddled on with no real plot progression, explanations or payoff.

With Joel riffing an old, grainy movie, it felt like a Comedy Central era episode.

Munchie was pretty obnoxious and not good, so it wasn’t too far off.

I’m watching the opening, and the host segment’s audio is a bit blown out/saturated, sounds like it’s hitting a limter way too hard, especially noticable on Tom/Connor.
Still excited to watch tho, I’ve heard a bunch about this movie prior to today.

Oh my… halfway through and I think I understand the hype, it feels like huge chunks of the movie are missing, scenes just happen, and the way the three “leads” are concerned with/talking about each other changes every time a new scene “starts.” It’s like there’s no continuity director. If you love moments of characters taking about important stuff that’s happened between the scene they’re in and the previous scene, this the THE movie.

There’s being intentionally confusing and bizarre, and then there’s this… The Bubble.

Finished the experiment, wow… the movie was like if Rod Serling & Patrick McGoohan had a shared cousin who was jealous at their mastery of spooky & surreal allegory, and tried to make something of his own in their styles… without understanding editing, story, motivations, etc.

The episode was fun, the whole rhyming plan segment was probably my favorite. Great setup for the big trio finale next month. Overall, this season has been, and continues to be, wonderful!

I can tell you that after repeat viewings, the un-riffed version of this movie does not make any more sense.

but I am looking forward to Joel, Jonah and Emily onscreen together!!

I’m watching the opening, and the host segment’s audio is a bit blown out/saturated, sounds like it’s hitting a limter way too hard, especially noticable on Tom/Connor.

Audio levels are a bit uneven - it made me jump at times. Anyhoo, these things usually get ironed out in the fortnight between screening and downloadable release.

I was reminded of Westworld - and this made even less sense.

WHAT IS??? And I’d just about forgotten about Rollergator, and now I remember it like it was sitting on me. Ugh.

Rollergator might be the first movie that actually gave me continous physical pain, even while riffed. There’s so many movies that disgust or unsettle me for one reason or another, but usually it’s something brief or just a genre thing I’m not down with.
Rollergator is… something else.
To be an ultra-cheap hip hand puppet home-video movie is one thing, that’s mild, but I think I might have developed genuine shell shock from that pervasive, never-ending, aimless guitar noodling track.

Yeah, but that’s what they do, that’s the job and these are the types of films they riff on - and comparatively speaking, it’s not as bad as anything else they did in the history of the show, not as bad as they built it up to be.

Oh, and let me add… it kind of spoils the joy of discovery - now I’ve loved the whole Gizmoplex experience, I love the look of the place, the overall atmosphere, and the energy that comes with having a show every two weeks, as well as the community they set up… buuut I think in this case silence would be golden. Nobody had to tell me this or that movie was awful or weird or whatever, in the past, I got to figure that out on my own. I often had no previous knowledge of the movies, and discovering them, what they were about, was a special part of the classic MST experience (and current MST as well, Carnival Magic is an example of that)

So, all I’m saying is I’d rather go in cold - and the cast and crew I love them all, God bless 'em, they’ve given so much, but… don’t take that movie-discovery part away from me. I know these flicks are bad or odd in some way, that’s the show, but let me find out how bad or odd on my own (Plus, for me, they just can’t live up to what I’ve built up in my mind, once you oversell the badness, etc.)

Honestly, I think The Bubble is better than The Day Time Ended.

As a movie. Not counting the riffs.

And I think this movie makes Manos: The Hands of Fate look like a Vincent van Gogh painting by comparison.