Subtitle Goof in The Dead Talk Back

When Dr. Forrester calls Mike in the opening of the episode, it’s subtitled as “Put a sock in it, Reddit dare.” While amusing, the anachronism makes me think that something got messed up. Unfortunately, I’m not quite sure what the actual insult was meant to be.

That was around the fire drill? He’s calling him Red Adair 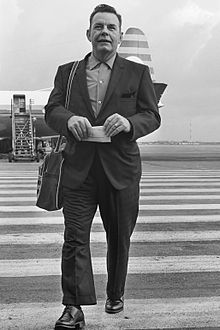 Paul Neal "Red" Adair (June 18, 1915 – August 7, 2004) was an American oil well firefighter. He became notable internationally as an innovator in the highly specialized and hazardous profession of extinguishing and capping oil well blowouts, both land-based and offshore. Adair was born in Houston, Texas, the son of an Irish immigrant blacksmith and his wife. He attended Reagan High School. During World War II, Adair served in the US Army, in a bomb disposal unit. After the war ended, he started...

That’d probably do it. Now just to get the captions fixed.

Oof, they also missed the “Ignatz and Krazy Kat” reference just before that.