The 2022 Sight and Sound Greatest Films of All Time Poll!

On December 1st, BFI’s Sight and Sound released the results of it’s once-every-ten-years ranking of the best films ever made. One list is by critics and another list is by film directors. 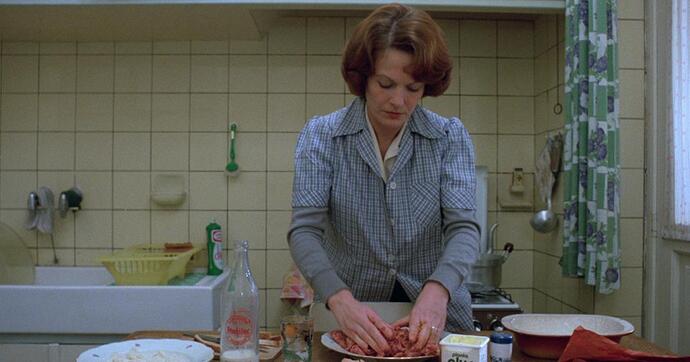 Revealed: the results of the 2022 Sight and Sound Greatest Films of All Time...

I’m sure nobody here has an opinion on the results!

In my case, I love David Lynch but Mulholland Drive at #8? No. (I also thought Citizen Kane was very boring but I have to accept that I’m clearly just wrong about that one.)

Still, it’s nice to see critics discover some films younger than I am.

I will preface by saying I have not watched Jeanne Dielman. it’s been on my Criterion Channel watchlist forever, but like most people, I have trouble finding/making time to watch a 3.5 hour movie where famously almost nothing happens for most of the runtime (real time meal prep!). But I understand the critics desire to get people to watch something so formally out there - and as film critic Sam Adams pointed out - essentially the opposite of current film making trends; it’s largely long takes with a locked down camera, no setting up sequels or extended universes, etc. If you sit down, put your phone down, and watch it, it should work your film watching muscles in new ways and help you appreciate different kinds of film making. That said, I bet it won’t get the 2032 top slot, but hopefully also the 2032 will continue the trend of swapping in some new voices. Maybe even get some more stuff that isn’t Western European or Japanese (where even Japanese seems to mostly mean Ozu and Kurosawa - both of whom are great! But you know what I mean.).

I struggle with Akerman, I’ve tried, and I’ve tried, and I’ve studied and read the reviews, I have attempted to be coolly objective and appreciate what others appreciate in them… and I won’t argue that Jeanne Dielman has an idea and an execution that’s precise and intelligently thought out and filmed – but man, it’s tedious (which is the point, I get it) but partway through my 2nd go, I notice that I’m grinding my teeth and digging my fingers into my knee. At some point, I figured I had to give up, acknowledge defeat, and admit that sometimes, I’m a cinematic philistine.

There’s this term out there, “cinematic vegetables” (it’s good for you, but yuk), that’s Dielman for me.

There’s this term out there, “cinematic vegetables” (it’s good for you, but yuk), that’s Deilman for me.

This is so on the freakin money. Thanks for sharing that. It’s the respect versus love proposition. There are masterful examples out there I will rightly acknowledge as great but simply not for me. The films of Lars von Trier is one of those and Cronenberg another. That said, when it comes to The Best Ever I feel whatever it is has to apply and succeed at multiple standards and measures to rate not just one or two. The film they choose as #1 this time around is perfect for film scholars and filmmakers though does it rate as strongly with a larger film loving audience. That’s the question and I don’t know the answer.

Curious, and with an eye on my movie blog… from the top 20, Citizen Kane, Vertigo, Tokyo Story, The Searchers and Man with a Movie Camera were ones I selected as my Best Picture.

Persona at 14 was my second choice behind Andrei Rublev which came in at 69.

I have a lot of nominees on the list, but my other Best Pic winners on the S&S top 100…

This pains me to say. The Outlaw Josey Wales (1976) is a pinnacle example of this for me. I LOVE the works of Clint Eastwood. He is a legendary director and star yet no matter how hard or repeatedly I attempt seeing Wales I can’t enjoy or even stand back and admire it. I wager the co-direction by Phillip Kaufman is why. The mingling of Eastwood’s sensibilities and his leaves the picture of many minds and it reads to me as several scenes strung together not a complete or total narrative. This is my opinion and in the collective thought a minority perspective. I stand by it and expressed it in this forum before. My passion towards cinema is strong and reads sometimes as “Do or Die.” And for that in the past, my apologies. I so want to get that movie and I just can’t. Like many scholarly favs and some viewers I well imagine.

I like Wales, but it doesn’t reach the highs of Unforgiven, which my all-time favorite western… which didn’t make the S&S list (my other 2 fave westerns did).

I like Wales, but it doesn’t reach the highs of Unforgiven, which my all-time favorite western… which didn’t make the S&S list (my other 2 faves did).

And it should. Shouldn’t it? Why is that I wonder? It’s not appealing enough to those voting? Unforgiven (1992) is my go-to Eastwood Western.

Greatest Films of All Time Poll!

Here’s my opinion: This poll is highly misnamed. If you make a new list every ten years, then, how can you call it the greatest of ALL TIME!!!? More apt would be “The list of movies that we think are great right now but will probably change in 10 years.”

At some point, I figured I had to give up, acknowledge defeat, and admit that sometimes, I’m a cinematic philistine.

I guess I just don’t understand why I should force myself to watch a movie if I’m certain I’m going to find it tedious and boring.

Mmm, the danger in seeing film as mere entertainment is that it becomes reduced to “ice cream for the masses” (to paraphrase Logan), it’s also an art form. I know I’ll sound pretentious, but I think for a society to thrive, it needs great art, great sculpture and architecture and painting and poetry and music, and yes, film.

Entertainment is important too, I love to be entertained, I own every Godzilla movie on disc for one. But if we lose the other, we’re looking at the death of culture, and that hurts us in more ways than we think.

Great art is not all tedious or boring, it can be moving, or thought provoking, it can enrich our lives. That doesn’t mean that each individual is going to want that from their movies (or their music, or their novels, etc), maybe they just want to have fun. But I do think appreciation of art, any kind of art, is good for the soul. That’s why I’ve gone to operas, and ballets and listened to and studied classical music - even if they didn’t all connect with me, it was important to experience that. it made my life beautiful.

But because film is extra special to me (it’s the one thing I understand, it speaks to me on so many levels) I’ll make an extra attempt to appreciate something like a Dielman… because there have been times over the years when I found I wasn’t ready for a movie. I wasn’t ready for Last Year at Marienbad in my 20s for example, but in my 50s, when I rewatched it and fell in love with it, I was. So, that’s why I try and try again.

Mmm, the danger in seeing film as mere entertainment is that it becomes reduced to “ice cream for the masses” (to paraphrase Logan), it’s also an art form. I know I’ll sound pretentious, but I think for a society to thrive, it needs great art, great sculpture and architecture and painting and poetry and music, and yes, film.

I don’t think you sound pretentious. You simply see film differently from me. I see film as an extension more of the gladiatorial games in the Colosseum than I do as an art form. And I don’t really feel that it’s denigrating film to say that it’s not art. It simply serves a different purpose. When someone tells me that the reason some movies failed is because they were rated PG or PG-13 and weren’t bloody/violent/vulgar enough to be good, I question that it’s about art and expression. I mean, the ancient Greeks had stories that were incredibly violent but all the action took place off stage. Oedipus (spoiler alert

) stabbed his own eyes with the pins from his wife/mother’s dress, but we’re just told that it happens and he comes out and discourses on why later. No gore needed.

I just don’t see film as art and I don’t equate it with other art forms. However, that being said, I’ll admit that there are things that claim to be art that I find ridiculous so my taste may be suspect anyway.

Personally, while I enjoy movies, I think we could lose them and not really worry about losing much culture. So I agree with your overall point, but I disagree that film is really much of a part of it. There are some gray areas where even I will admit that film plays an important role beyond mere entertainment, but that doesn’t tend to be in fiction. Mileage may vary (and I know yours does).

When I look at eastern European cinema, Polish cinema in particular, they’ve poured so much of their pain and suffering into it, all the human rights violations and the like are reflected in much of their films. It can be hard to watch, but they are vital, and they do reflect a culture. You might not think there’s art or culture or much significance in film, but there is.

I agree whole-heartedly that there is art and culture in film. Films are a product of their time, the cultural mores, the things people find important, their struggles, and their stories are important. It is one of the (many) reasons I cannot stand people who look at films from the 30s, 40s etc and want them expunged from current cultural conscienceness because they are “problematic” to modern sensibilities. You don’t learn from history by erasing it.

On the other hand, I have no desire to watch a film like Schindler’s List, either. Yes, it is an important film. But my psyche cannot handle that level of dark. As I often tell people, real life is hard enough, my fantasy world needs to be happy.

I certainly agree that films are a reflection of the time in which they were made and I agree with you that there are problems with removing films or attacking films for not being what we are today. It’s utterly ahistorical to assume that every time period and value system must be what we have today or it’s wrong.

Apologies if I came off overzealous, but that reply pushed a button, and I suddenly turned into the Texan in Rocketship X-M, “A mere speck!?”

Anyhoo - yeah, some modern attitudes on those older pictures bring my blood to a boil.

And your comment reminds me of when I got to that season in my blog and how I really didn’t want to rewatch Schindler’s List. I’m glad I did, it was even more powerful on a second go, but yeah, not a happy fun time movie. The one I’ve had a hard time going back too was the movie that inspired Spielberg on Schindler, Come and See - it was brutal, and it hurt to the very core. Absolutely brilliant though, and important.

Edit - After making “Come and See” director Elem Klimov stopped making movies. He felt there was nothing more to say, nothing that important left to say, for him as a filmmaker.

If you’ve ever wondered what happens at the Belcourt in Nashville other than RiffTrax live, they don’t mess around. 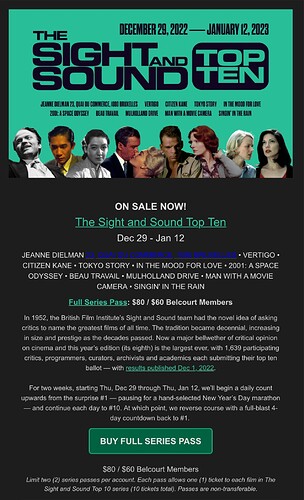 The theater should live stream a view of the audience so that we can watch the audience watching “Jeanne Dielman, 23, quai du commerce, 1080 Bruxelles.”