Thanks for the code, used it to pick up Max Havoc: Ring of Fire and Dreamscape.

as SandyFrank pointed out elsewhere…

Another RiffTrax short from Bridget & Mary Jo has landed.

Jack and Jill - In which Bell telephone illustrates workplace carelessness.

While the men eventually get theirs, Jill’s the real screwup here, “ah women, women, women, women” the short seems to sigh. Jack’s mostly there to be her adult daycare provider (according to Bridget, lmao).

This is 20-minutes of sunshine and condescension… with plenty of cute references (Yankees organist Eddie Layton), and I love it when they talk back to the narrator.

A new way to show your appreciation! 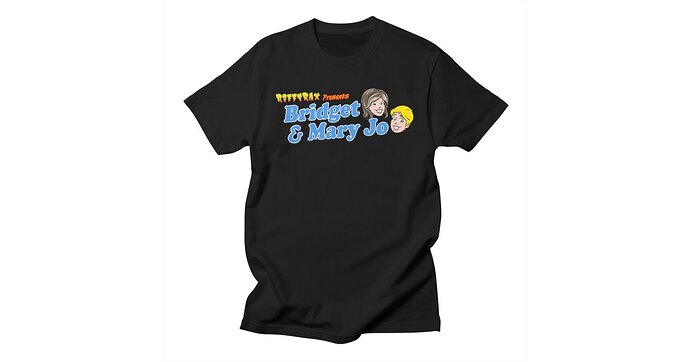 Bridget and Mary Jo's official logo! Get it on a variety of items and you'll have the best outfit in the tri-state area!

Jack and Jill really was Goofus and Gallant, with Jill as Goofus. More than anything they reminded me of my partner’s dog and cat. While the cat’s name is Jack, he’s very much the Jill in the partnership, constantly distracted by every new thing and doing himself a mischief. The dog, Archer, is the long-suffering one who is always trying to keep the cat in line.

Checked out My Mother Was Never A Kid. It’s… diverting. Though not their best.

I saw the “movie” in its original form and I feel like large swaths of it were cut for time. What a shame. I remember a truly terrible moment where the Eighties teenage heroine is praising The Who and I was slowly shaking my head. No, nothing about this character suggests she’d be a fan of Hippie rock in ANY way. This is just terrible lazy-ass Boomer writing. I feel like Our Heroes could’ve had some real fun with that scene. Oh, well. I might just be getting my teen vid specials mixed up.

By the way, this terribly-retitled “movie” is based on a 1977 book called Hangin’ Out With Cici which I remember as in fact being pretty great. It was kind of doing Back To The Future years before the latter was even a thing. The author of the book eventually went on to pen all those Sweet Valley High books and presumably swim in even more money than Scrooge McDuck. Yay. I guess.

Bridget and Mary Jo were so ahead of their time in the early days of MST3K. There was so little representation of funny women on TV back in the 90’s. Pearl Forrester remains one of my all time favorite female characters, right up there with Elaine Benes, Jerri Blank and Karen Walker. I always wished we’d got more than just those 4 episodes of Bridget’s “Flavia”. Her response to Pearl’s attempt at shaming her bad breath has prompted my favorite retort whenever my husband gives me flack for eating kimchee. Their chemistry continues to please. My most recent conversation-steal comes from “Cat-women of the Moon”:
Bridget: “Hey MJ, are you a cat person or a dog person?”
Mary Jo: “Well I’m kind of poly-animal amorous and I think the cat/dog system is really a culturally imposed binary.”
Brilliant. Please keep it up ladies! 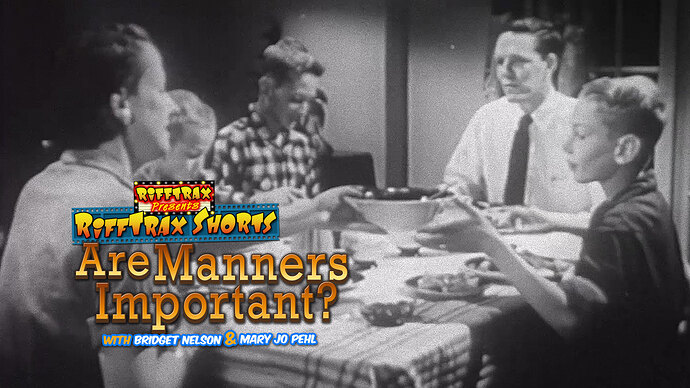 In this short from Encyclopedia Britannica, young Mickey would rather watch television than be courteous to his mother’s guest. As if that weren’t bad enough, his mother brazenly flaunts an

I could have sworn Rifftrax did this one, or maybe it was one I wished someone would do, as I saw it unriffed years ago.

Boy, I didn’t know Ben was a kid actor? This was an afterschool special; they do a half hour of it (?) 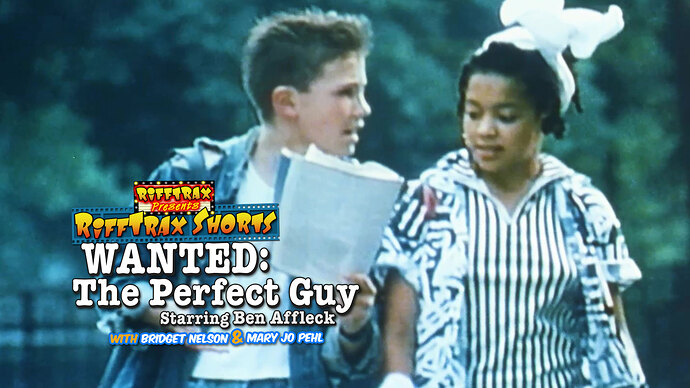 I hope they do more Afterschool Specials! They’re a gold mine for this kind of content.

And oh so funny too…

I haven’t watched the new one yet, but I did buy it - good day for riffing, MST and Bridget and MJ

Nobody Tells Me What To Do! is magical work from our duo.

It’s a 1983 morality play about how baseball is better for you than shoplifting or vandalism. So are videogames, oddly enough. I wonder if every teen and adolescent who saw the original leveraged that fact against their elders later on? If I’d been that fortunate, I sure would have.

The plot unfolds somewhat more logically than its older relatives like What About Juvenile Delinquency? But it’s still the ripest of fodder: stilted acting, plastic dialogue, fake reggae fit for a shopping mall, and terrible fashions. The riffers take particular delight in jabbing at “Donna,” who always looks and sounds like she’d prefer to be anywhere else on Earth than in this piffle. There’s also two cops who make their counterparts from Future War sound like Patrick Stewart and Derek Jacobi in comparison.

Three stars. (And one stolen blouse.)

Bridget and Mary Jo were so ahead of their time in the early days of MST3K.

Brilliant. Please keep it up ladies!

So much word to that.

And welcome to the forums!

Jan in the Pan returns! Bridget and Mary Jo have done a reriff of The Brain That Wouldn’t Die.” 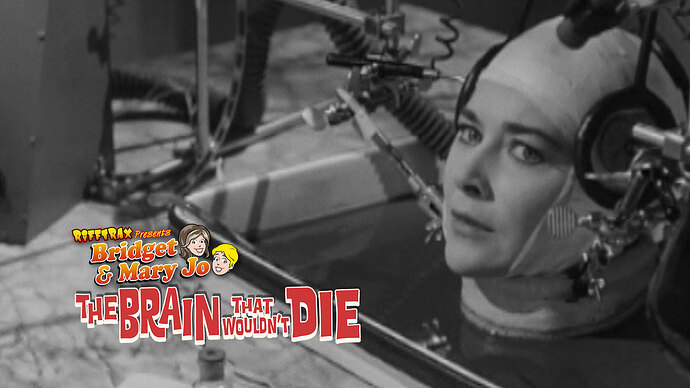 The Brain That Wouldn't Die

Dr. Bill Cortner has been busy defying the medical community's cautions by unsuccessfully trying to transplant stolen limbs onto his lab assistant. On a weekend getaway he drives too fast, rolls his

Ooh. I might just have to Day-One that one. Their take on Angel’s Revenge manages to top the original. Wonder if they did it again.

I just finished checking out High School: USA, and I think it might be the doofiest movie Rifftrax or MST3K has ever done. This includes the Teen Ager flicks.

Oh boy, I couldn’t agree less that Bridget and MJ’s Angels Revenge is better than the MST3K version. I’m glad you liked it, but I couldn’t even finish it.
As much as I enjoy Bridget and MJ’s other releases (especially the Teen-Agers flicks), I was really disappointed in that one.
The MST episode embraces the '70s-ness of the movie and the washed-up celebrities and turns that into great fun - the Bridget and MJ version seems to be afraid to make any reference to the '70s that anyone might not get. The riffs are almost all generic jokes that could have been made in any movie, and not especially funny, I thought.

Angel? I thought both were so/so, neither version was a knockout to my mind.

Used my coupon for TBTWD

It’s interesting that the Mads recently riffed on Brain too, and did a good job with it, and I liked what the ladies did with it as well. Interesting to compare the differing personalities each bring to their riffs.

Gotta agree that there is simply no comparison between the MST3K and Rifftrax Angels Revenge. It’s one of the masterpiece episodes of MST3K what with Frank’s Tug McGraw impersonation (“I’m Tug McGraw.”), Trace dressed up as Billie Jean King and the hilarious “Is this the most Seventies thing EVER?” debate that runs over the closing credits.

And the final riff:

Couldja even do that today?

Thing is, I bet most of the riffs that could be construed as insensitive TODAY were actually written THEN by Bridget and Mary Jo. Be interesting to find out.

I just watched Fear with my Friends subscription.

Everyone tries hard to do Hitchcock here, but of course that’s tough when you don’t hire a very imaginative scriptwriter and you have no budget. It’s competent for what it is, and the riffing is good. (Nitpick: we see a house panther a couple of times but his/her riffing potential remains unlocked.)

An impoverished medical student resorts to drastic measures to pay off his debts. The story never tries to capitalize on this setup by making him bargain basement Re-Animator, though. Another missed opportunity is when he meets a kindly waitress and she’s NOT part of a local coven or anything. The ending is ridiculous and you’ll probably figure it out halfway through.

Much fun to be had here. Our Heroes are in their element with these drab B&W super-oldies.

Just watched that one myself! It’s one of those movies Bridget and MJ are so good at finding that aren’t exactly GOOD but are strangely charming. I was cracking up every time the detective showed up who seemed to have everything figured out, but wasn’t gonna do anything about it without a confession from the protagonist.