The James Webb Space Telescope and other cool astronomy stuff! 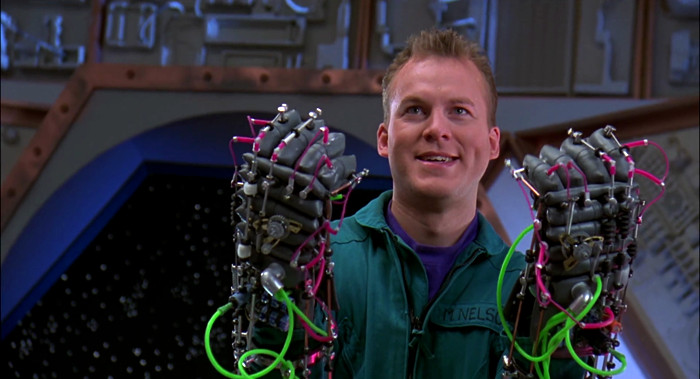 i’m just so excited, i’ve waited for this so long, i had to share it with my MiSTie pals. but don’t let Mike help.

i should have asked if it would find EVIDENCE of alien life, but i was too involved in my sting operation

Will it launch ‘in the not too distant future’? Eh? Eh? See what I did there? I’ll see myself out…

I love JWST and everything it stands for, can’t wait for the launch and the transition to operations at last. Such an audacious design too, I wish we could see the “unfolding” with some well placed cameras but I fear that is an expense too far as that won’t happen for a few weeks (months?) until after launch. I snagged this photo on ebay a few years ago, seems to have legitimate signatures of all the staff involved in building of NIRSpec, one of the primary instruments in JWST.

I have really enjoyed watching JWST take shape through the webcam during construction and various feeds during testing, it seems like only yesterday I remember watching them laboriously attaching each mirror, with it’s little protective covering, and then that glorious moment when we saw her deployed in all her glory for the first time!

Big shout out to HST too, still going strong despite the recent blip. I think we have an HST alumni among us in @SandyFrank, mentioned in the “facts about you” thread - I keep meaning to reach out with a DM and let them know how big a fan I am of theirs and all their colleagues work

Truly fascinated by all the space telescopes (especially the large ones!), I collect a lot of space telescope memorabilia and it’s a subject very close to my heart for no good reason other than I love the images returned and the amazing science.

Well, Mike broke the Hubble. It’s about time we got that replacement up there.

Before it launches, though, the James Webb Space Telescope (JWST) first has to arrive at the Guiana Space Centre in French Guiana, South America. Its shipping container is essentially a barely mobile clean room. While the telescope in its shipping container could be flown to French Guiana on a U.S. military transport plane, the airport for the Space Centre in French Guiana is on the wrong side of a bridge that can’t support the weight of the combined package. So the JWST has to be shipped by sea. It will travel down the west coast of North and Central America, through the Panama Canal, and then across the southern Caribbean Sea and the north coast of South America to the port of Kourou, French Guiana — all just to get around that insufficiently strong bridge at the very end of the trip. Smooth sailing, right?

There are pirates to worry about. No kidding! The Panama Canal is a chokepoint for many major shipping routes, so of course there are pirates. But think more of the pirates you may have seen in Captain Phillips (2013), and less of the ones in the Pirates of the Caribbean franchise. Pirates that hold ships, cargos, and crews for ransom, rather than stealing ships that can easily be tracked from the air or orbit, or plundering valuables that are in hard-to-unstack or -move shipping containers.

Now put a fairly delicate, $10 billion scientific instrument into an easy-to-spot, one-of-a-kind shipping container and send it on its way. Just cracking the container’s airtight seals outside of another clean room would run a significant risk of contaminating the telescope optics and causing the sunshade layers to stick together, preventing the latter from deploying properly in space. Then imagine what some armor piercing bullets or an IED could do —or even just plain seawater sprayed in from a ship’s fire hose. Having the JWST held for ransom by pirates is a very real possibility that NASA has had to plan for.

The space flight community is actively watching to see if Pacific and Atlantic units of the U.S. Navy or Coast Guard conduct training exercises “coincidentally near” the shipping route of the JWST while it’s en route.

I remember when NASA was going to cancel the telescope and I joined a social media pressure campaign to get them to restore funding for it. So cool to see it finally almost ready.

As for aliens: Most of the people I know who study these things have come to the same conclusion, which is that the universe is too vast for aliens not to exist, but it’s so vast that we’ll never have any meaningful contact with them.

As it happens, I’m wearing just the right shirt for it today, too.

When I first read your post a few weeks ago you filled me with fear; I have been watching its construction so closely and for so long, I never imagined there was any kind of risk as it travelled to the launch site. However, very pleased to see news today that it has arrived safe and sound! 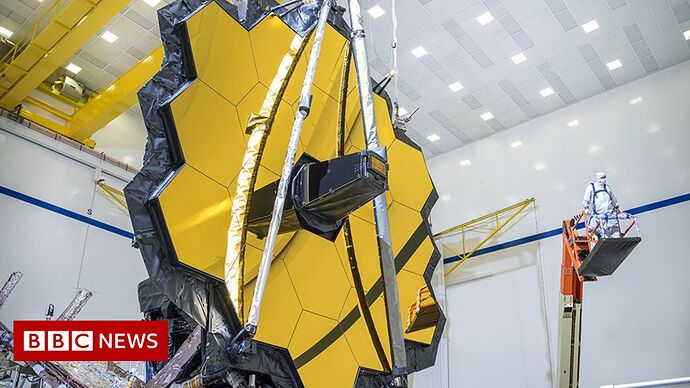 The successor to the Hubble Space Telescope reaches French Guiana to prepare for a December launch.

Just a few more weeks to go, launch is going to be a real nail biter…

Woo hoo! I seriously doubt there will be any issues mating it to the launch vehicle. And the Ariane 5 has a very good launch record.

But, yeah, @slippifishi, the launch is going to be a nailbiter, all right. As will be the entire deployment sequence — all fifteen days of it. Assuming that all goes to plan

, they then spend the next five to six month or so fine-tuning the focus of all the individual mirrors.

And remember — unlike the Hubble, there will be no do-overs should anything go wrong after launch that can’t be cajoled from the ground into working. The JWST wasn’t designed for in situ repair or upgrades; it has no grapple points, and no modular subassemblies that can be swapped out — more than a few things were glued together to reduce mass.

Besides, the only manned spacecraft that would have a chance of reaching an on-station JWST in the next five years — Orion — hasn’t even flown a second time yet, much less launched by the Space Launch System, or with a crew onboard. Crew Dragon, Soyuz, and Starliner (

) were all designed for LEO operations, and would require major modifications to send a crew out to L2 and back. I suppose SpaceX could go back to their old plan to send a Crew Dragon around the Moon using a Falcon Heavy, but that plan was mothballed several years ago, and they’d still have to figure out a way to get two or three astronauts in EVA suits (not the spiffy SpaceX emergency pressure suits you’ve seen) in and out of the capsule. The docking hatch isn’t wide enough, and the side hatch is designed to be opened from the inside for emergency egress only.

As for Starship? Well, after SpaceX has successfully landed on the moon the HLS version NASA has contracted them for with a crew, we can talk.

The launch is just the beginning of a bunch of maneuvers and mechanical operations it needs to make until it gets into a stable orbit. And we don’t really have a way to fix it like we did with the Hubble. So this is going to be a tense year. But I remain optimistic!

I’ve been waiting to see this for so long that I almost don’t believe that it’s really going to happen.

That was a bit of a sigh of relief that the telescope arrived without mishap. There was a real concern about the pirates in the area trying to hijack it to ransom. Now on to launch! 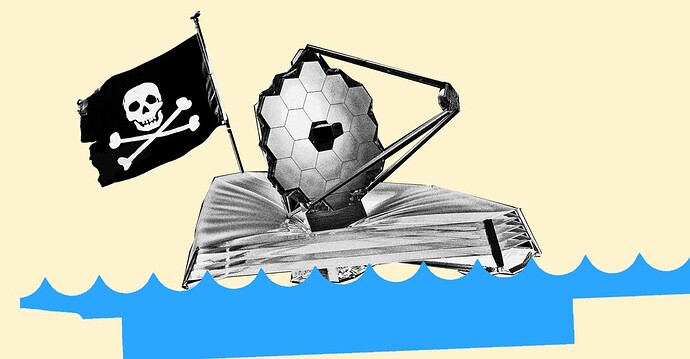 Who Would Kidnap a Space Telescope?

‘‘We hope pirates don’t take it,” one astrophysicist said.

So, yeah, lots of sighs of relief the JWST arrived without incident.

I, too, have been following this for so long that it doesn’t seem real that it’s happening. Once it’s at its destination, it may as well be a Mars rover for repair purposes – hopelessly out of reach. I get anxiety hanging a shelf or wiping a hard drive; this level of “no do-overs” is terrifying. 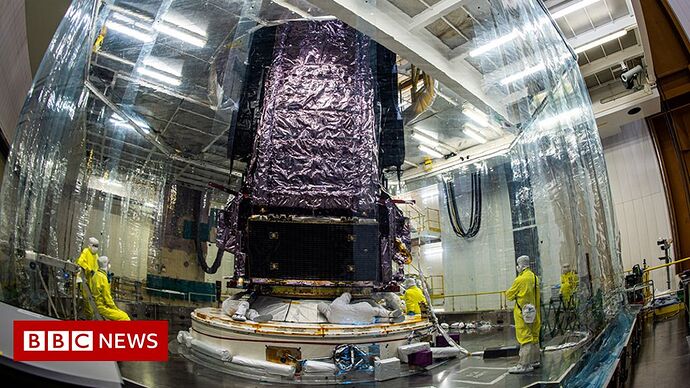 The $10bn successor to Hubble is bolted to the Ariane rocket that will blast it into space.

“The pictures on this page are among the last we will see of Webb on Earth.” gives me shivers.

It’s too bad the telescope only has enough fuel to last for 10 years. We’ve gotten decades out of the Hubble and it’s not dead yet.

Yes it does feel like we may end up with a gap in space telescope coverage in the future, but with advances in technology and techniques since she was launched, I think we are nearing Hubble resolution from the ground now, and in 10 years time, who knows what we will be able to achieve

If I remember correctly JWST was being developed before Hubble even launched, so I hope/wonder if JWST’s successor is already in the pipeline?

It’s too bad the telescope only has enough fuel to last for 10 years. We’ve gotten decades out of the Hubble and it’s not dead yet.

Spirit and Opportunity were meant to last 90 days. One of them lasted 15 years. Hubble wasn’t supposed to last as long as it did either.