“That Turkules is one baaaad…”

White Dot has her own thread. Shouldn’t he?

Hitting the gym and guzzling protein shakes every day now, so that by next Thanksgiving I can cosplay convincingly as the new best supporting character ever!!

He’s my favorite abomination ever!

If only he could’ve met Adam West. [sigh]

Who doesn’t love a holiday abomination? Turkules forever, I say!

I can’t wait to get my Turkules Action Playset.

Turkules, people are stuffed after eating him

Turkules, only the food poisoned fear him

Softness in his eyes, we love his tasty thighs

There’s a burning in the heart, a fire in every fart

(sung to the tune of "The Mighty Hercules)

Working on some fan art now for that defunct canned soup line. He and Ann Miller are dancing together in front of a big ol’ pyramid made of turkey soup cans.

Oh, if I had any artistic talent I would subject you people to an endless stream of The Unspeakable Adventures of Turkules.

Who doesn’t love a holiday abomination?

Indeed! Easter has the Bunny, Christmas has creepy laughing reindeer, and now Thanksgiving has its own atrocity.

These are actually quite disturbing, now that I think about it.

Turkules vs. the Ice Cream Bunny

Naturally, it takes place in Florida, and it ends with Turk tossing Santa and the Bunny to the North Pole

@timryder called him a “freak of nature” on Reddit and I dispute this. He is an artificially-created freak. So if anything, he’s a freak of unnature.

Anyway, he’s some sort of freak.

He’s the one turkey that doesn’t make you sleepy!

“I’m so full of tryptophan I can barely keep my eyes open.”

I’ll just drop this here. Because if there’s anyone who needs Turkules right now… 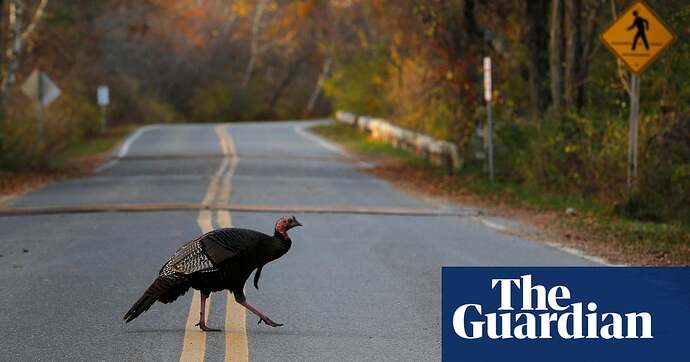 ‘He kind of amps them up’: ‘Kevin’ the ringleader as turkeys terrorize...

Turkules or Ben Murphy. Either will do.

Turkules, or as I like to call Kinga and Synthia’s talking Manos.

Wild turkeys are mean little dinosaurs with big sharp spurs on their legs. Stay far away from them.

Still safer to be around than most retail shopping establishments right now.

I’ve tangled with a Muscovy duck and have the scar to remember it by. I can upscale that to turkey.

Every year at Skywalker Ranch we’d get ‘warnings’ about how territorial turkeys are, and there would always be stories about some of them. They hardly seem to share a brain cell among the lot, but… they find ways to be complete twits. You get good laughs when they fly, esp on landing; about as aerodynamic as a football strapped to a ferret.