The Pumaman is being "surgically enhanced"

So can’t you just keep running the enhancement process on the previously enhanced version until you get to like 4K?

Another movie that exists in a much better quality than what was used on the episode is The Screaming Skull. I’ll bet Tormented exists in a crisper form as well.

I’m VERY leery of ever fiddling with aspect ratio. I’ve seen a lot of movies and TV shows completely wrecked by that irrational hatred of pillarboxing. But these stills look pretty good. 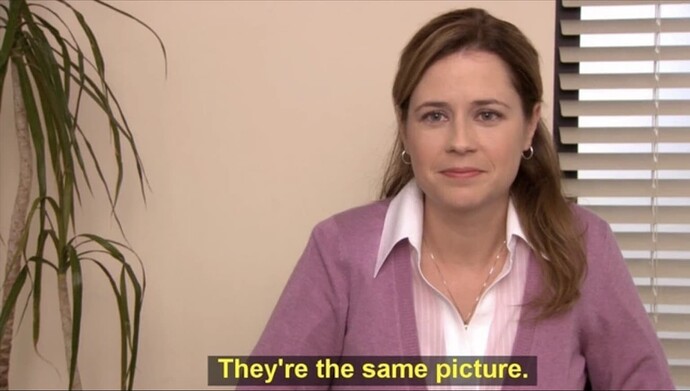 Seriously, I’m sure the differences will be more clear when I see it on my big TV. As long as they’re not replacing episodes (And they’ve assured us they are not) I really like this as a reason to tune in beyond, “Hey. Let’s all watch Pumaman for the hundredth time!”

As long as they’re not replacing episodes (And they’ve assured us they are not) I really like this as a reason to tune in beyond, “Hey. Let’s all watch Pumaman for the hundredth time!”

Heh, Pumaman’s a top 15 episode in my book, so I’m jazzed to have this new treatment as a reason to watch this as well.

It’ll be a trip to see how this looks when it drops this Friday!

Same here, I prefer keeping the original aspect ratio for preserving media as to how it was presented (i.e. early seasons of the Simpsons). Though not sure if the cropping is the enhanced episodes or just the images (since there’s the percentage at the bottom for comparison).

Still, if the episodes are not going to be replaced, I wonder if there’ll be a way where you can choose which version of the episode to watch in the Gizmoplex outside of the livestream replay

Incidentally, if you haven’t seen the interview with Walter Alton before, he’s not a fan of the episode and is pretty offended by the riffs against him. So don’t expect good feels about MST3K from this one, as opposed to say the interviews with David Worth or the Clonus guys.

So don’t expect good feels about MST3K from this one, as opposed to say the interviews with David Worth or the Clonus guys.

“Hey. Let’s all watch Pumaman for the hundredth time!”

It is not. It’s one of my favorites, too! I just like it when these tribute shows find a way to go a little bit above and beyond.

Yeah I’m hoping the cropping there is just to fit into the email update and not indicative of Crow Mike and Servo eating a MegaMushroom.

It would be cool, but also super-difficult, to replace the original film’s portion of the screen with a better copy and try to stitch it together with an enhanced version of the shadowrama.

I have a question about the sample frames in the Backer email. The ones on the left say “Original Video (540p)”. What video format gives you 540p (convenient as it would be for being half of 1080)? NTSC is two 240 line fields interlaced to one 480i frame. Even deinterlaced it’s just 480p. We don’t live in a PAL region, but that’s closer at 576i. Was there some funky broadcast videotape format I’m not familiar with that yields 540p?

That number includes the vertical interval and rescan stuff. Some extra lines top and bottom of the frame. Teletext lived in a few lines at the top.

Each frame is composed of two fields, each consisting of 262.5 scan lines, for a total of 525 scan lines. Initially 486 scan lines make up the visible raster, although this was later standardized to 480.

Further googling tells me that NTSC is actually 720x480 and because CRTs have rectangular pixels but modern computers mostly have square pixels and so DV NTSC format becomes 720x540 to preserve visible proportions. I almost follow that. Enough so that I can buy that they have 540p source after deinterlacing.

Fun fact: There’s no fixed horizontal resolution in analog television, and so there aren’t actually defined “pixels,” in analog TV. The “effective” horizontal resolution depended on how quickly the cameras could modulate the signal, and how fast the TV could display the modulations. When creating a digital standard to convert analog to, 720 was a somewhat arbitrary number selected based on what the best equipment at the time could effectively resolve. Later, some security cameras expanded the horizontal resolution to 960H to “squeeze” in a widescreen image.

Analog TVs just squeezes all the modulations during the horizontal scan on one line. However, digital video relies on discrete “pixels,” typically square, so to get an effective 1.33:1 aspect ratio, some digital converters increase the horizontal resolution to 540.

It also should be noted that 540p is exactly half the resolution of 1080p, so it allows for easy upscaling.

Good facts. I was trying to not make my question any more confusing by bringing ambiguous width of analog scan lines into it, but interesting for those unfamiliar but curious.

I’m assuming that 1080 lines must have been chosen for “full HD” because it was double the lines of DV NTSC (now that I know that’s a thing). I do know that the 16:9 proportions were chosen as the geometric mean of 4:3 (TV / Academy ratio) and the common modern theatrical 2.35:1, so the black bars would be equi-area whether displaying TV or a movie while allowing a wider native format than SD.

On Shout Factory, he seemed mildly irritated. Not super-mega offended by the whole thing. It’s easy to sympathize with his unhappiness about some of those jokes.

If the story he tells about the original costume is true, I think we should all thank him, in our hearts, for putting his foot down about it. The Dockers were a big step up. Also… he did do that Puma-style trans-dimensional exit from the interview, which was really cute.

Yes, I don’t think he was out of line about those he took offense at. They were pretty harsh about his kissing skills and so forth.

Unpopular opinion: he was a good-looking guy. Still is in the interview, too.

I agree, he’s decent-enough looking to be a hero. Moreso than anyone in Beyond Atlantis, for example.