The Three Flavors of Season 13

Jonah? Emily? Joel? Three SOLs? Three sets of bots? Three Show Opens? Which version are you waiting for? Joel’s Return? Jonah’s Third Season? Or Emily’s Debut? Any of them have your number? What leaves you chomping at the bit?

More scenes of Waverly and Growler. I still feel like I have an unhealthy obsession over them.

Super excited for all three, but having Joel back is going to be amazing. I can’t wait for the new season!

I’m looking forward to all of it! I’m being cautiously optimistic, of course. I’m curious to see how Emily does hosting full episodes. Everything I’ve seen her in so far has been… well, lackluster in my opinion. But this is gonna be different, since these are actual episodes of the show and not little online events. So, I’m hoping for the best. But I think most of all, I’m happy to see Jonah come back for round 3. He’s such a laidback and enjoyable host and it would be sad if he only ever got two seasons.

Growler snatches me. His low-key ah shucks demeanor is so appealing. He forgives and accepts so easily. More Host Segments and Theater Cameos would be welcome. Waverly too. His quirkiness is infectious.

I agree. Seeing Emily host a whole experiment is worth waiting for. She’s an awesome combination of cute and funny. What more could anyone want?

Let me say that I am excited for EVERYONE this season. I wish the best for Emily and the return of Joel could be great.

This said, I’m actually super excited for Jonah’s return (especially as he tackles a Gamera movie!).

I really like season 11 and thought season 12 showed the new crew finding their feet and groove.

I’ve long said if Netflix had picked up a season 13 (with more than just 6 episodes) I think that would have been the equivalent of the original show’s season 3. Everything would have just come together.

So, I’m excited for it all- but really looking forward to seeing if the continuation of Jonah’s time proves me right.

Curious about Emily, but being old School I’m mostly thrilled about Joel hosting again. He’s always been my favorite and anytime I get to see and hear him riff again, either live or on a short, is always a good thing.

Joel has always been my favorite host, but I’m most excited to see more Jonah episodes. I’m curious about Emily but don’t like the feeling that the show is already “moving on” from Jonah after so few episodes. I guess we’ll see how it all goes. Curious to see how it all ties together on screen.

All in for more Jonah. Joel’s return is cool and the Emily Crew has potential, but Jonah utterly charmed me as host, so that is what I’m most stoked for.

I want to see revealed that there have been multiple experiments going on all this time. Perhaps even by different MADS! Muahaha… Also a surprise cameo by Mike would be really cool.

Emily was great on the Live show - she’ll do just fine, no worries there. And while I’m happy to see Joel back in a jumpsuit, what I’m most interested in seeing is how they get them to all interact with each other

It was mentioned in a post above that Jonah would be doing the Gamera film - have the host/movie assignments all been listed somewhere and I missed it? Or is Jonah/Gamera just a high hope?

It was mentioned in a post above that Jonah would be doing the Gamera film - have the host/movie assignments all been listed somewhere and I missed it? Or is Jonah/Gamera just a high hope?

No there is no list as to who will be riffing what. The Jonah Gamera connection was made either in a VIP video or maybe twitter when folks asked if Joel would be riffing the Gamera film.

One of the weekly updates had a picture of Jonah and the bots in the “theater” and the caption said it was for the Gamera film. 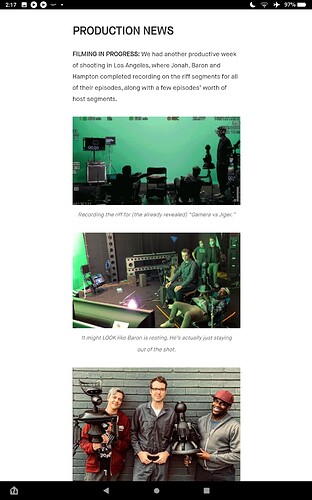 The prospect of Joel hosting again is what propelled me to back the latest Kickstarter. Watching Cave Dwellers at the age of 13 gave me a second life and Joel is MST to me. I planned on committing anyway. As I had in 2015. Joel hosting one or two episodes shoved me into hyper drive and I spent far more than I ever intended to because of it. No regrets. Having Joel Robinson back and a whole new season of MST3K pays for itself. Thanks to all of you who supported it along with me. We did it!

I’m really looking forward to seeing episodes w Emily. I haven’t seen her in a live show, but all the bits I’ve seen w her online have made me think she’s going to be great. Some of the movies they picked look really promising also

Some of the movies they picked look really promising also

It’s not really moving on. Nearer to expanding into multiple visions of the same show at the same time. The Netflix cancellation prompted Joel to rethink MST as he had with the 2015 Kickstarter. Joel wants the show to live on and as adversity presents itself he puts on his thinking cap. It’s who he is. Much as Jonah was the new direction in 15. The Gauntlet, the losing of Netflix, the finding of a new platform, the live tours, the running into Emily and adopting her into the family, Covid-19 and the delays it caused, the mashing of these currents flowed into 6 episodes of Jonah as a season and Emily joining the fray splitting episodes between the two. The 2021 Kickstarter in the era of Covid tweaked it farther with Joel tossing his hat into the ring to draw backing and as he said to experience the new production climate that Emily and Jonah are plunged into. This is an evolution of recent events and Joel adapting to them on the fly. Jonah isn’t going anywhere. Not yet. Joel’s merely stretching MST to meet the time as he sees it. Jonah directing Emily’s episodes is Joel passing artistic control to the next generation and handing Jonah further stakes into the show. I too wanted Season 11 repeated and Jonah the face of every episode. Things change and Joel played with the formula identical to The Return. I have trust it’ll work out and better than we imagine. Joel’s never let us down. Not yet.