Hamlet is a marvel of Brutalist set design. That is all.

I genuinely liked Parts: The Clonus Horror. A very intriguing, disturbing story premise that was expanded upon well in the movie.
Also Santa Claus Conquers the Martians because it was just a fun little story. The Martians were a good mix of menacing and goofy as the story required. And I like the notion of Dropo being delegated to be Mars’ Santa Claus. Hopefully if Elon Musk tries any colonizer nonsense, Dropo and the Martian kids will throw toys at him!

Actually, I agree. I think the riffing is funny on those ACI shorts, but at the same time, I think they’re too dismissive of the idea that you can repurpose things to have fun without spending money (or as you say creating more pollution). Quite frankly, those shorts should be re-released without riffing and create a new eco-conscious way for kids to play.

Just watched The Starfighters and The Skydivers each for the first time back-to-back. I’m not feeling terribly generous right now, so I’m going to 2-for-1 these and say I learned things aboutplanes.

I really can’t stand Wizards of the Lost Kingdom II. For many, many reasons. The first WotLK was at least earnest, but the second was just cringey and irritating, even though the basic plot could’ve been interesting. I will say that I kind of liked David Carradine and his character as The Dark One. For one thing, you don’t expect and legendary hero to be called The Dark One and also not the main character, and you certainly don’t expect him to be running a tavern with his table-dancing wife

The “she’d like to stir his olive” moment in Monster A-Go-Go is so competent that I’m pretty sure it was stolen from a different B-Movie.

There’s a great line in D.O.A.

Then I realized, waitaminute. That’s how Rick describes Louis in Casablanca!

City Limits is far from my favorite episode, but ignoring the incomprehensible storyline of fighting against people who are trying to restore society, the idea of this country kid going to the city and getting into more than he bargained for but sticking with it is a common trope that isn’t done too badly. And of course, there’s a genuinely star-studded cast. …at least one star.

but ignoring the incomprehensible storyline of fighting against people who are trying to restore society,

I just saw the Floats one yesterday and I want to make all those humble, cheesy homemade boats! I’ll even bring along a big pool cleaner’s net and skim all the debris before I go home to watch Vegetable Soup and Carrascolendas on PBS while eating a Butoni Instant Pizza… lovingly prepared in the toaster oven by Mom, because I’m still too short to reach the counter safely.

And I don’t even care.

Just last night, my niece asked if I had a shoe box (amazingly, I did) and she used it to make an eye doctor’s office. She had a front door, the exam room with the letters on the wall and the place to sit. She also had the front office where you’d check in at the desk. It was fun.

The sugar one was pretty cool. How to make Easter eggs and presumably Dia De Los Muertos skulls as well.

Heaven Forgive Me, but… I like most of the fashions in Munchie. I think we’ve reached the point in time where they’re about to move from “Dowdy” or “Outdated” to being “Vintage” and having some automatic cache because of that.

There used to be a chart which tracked this progression from decade to decade. We had a copy in the one fashion-related drawing course I took eons ago. I wish I could find it now.

(I concur with whoever pointed out elsewhere that the decor in the hero’s house is bizarre, though. I kept getting distracted every time we saw that side table with the, uh… giant ceramic head of garlic sitting on its lower shelf? What in blazes was going on there? Desperately needed its own riff.

I don’t know about the hair though, that style seemed to take a lot of work.

At least once it exceeds Twiggy length.

Movie anything usually does, right? One of the most tragic things to see in a film is where it’s clear time and effort went into some poor actresses’ (it’s usually but not always actresses) makeup and clothing only to have her look awful, because someone didn’t understand lighting or blocking or…taste…

The jacket Elliot is wearing in his first scene gave me a hard flashback to the 8th grade. 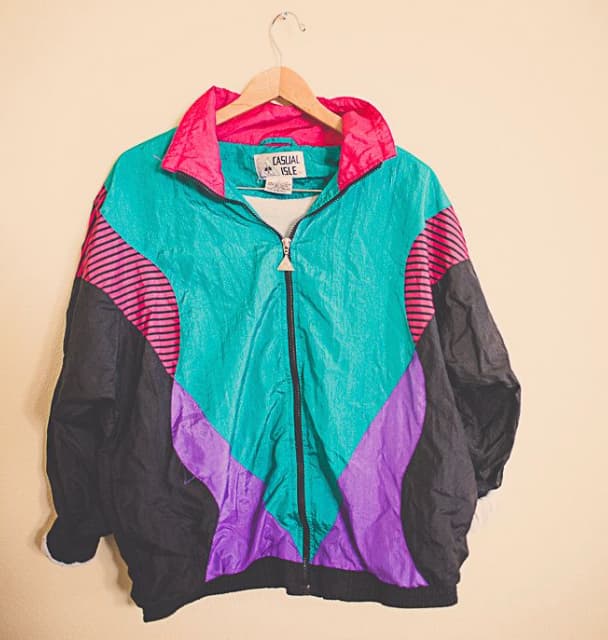 I’m amazed that Our Heroes didn’t say something like, “Whoa. What country is THAT flag from?” 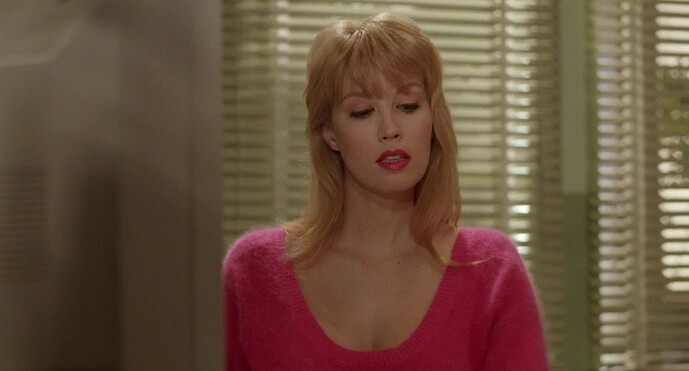 Monique Gabrielle has a role in Munchie.

Outside of that, I got nothin’.

Sure, but the regular version of 80’s Big Hair takes a lot of work. Nothing mainstream is close, except for the all-time champ, the 50’s Beehive.