Again with the four…

Question: Do you guys start with the same word every time? I do, I was just wondering if that was me being odd. I don’t know anyone in real life who plays so I don’t have anyone else to ask.

Anndd, we’re back to normal.

@diana1138, yes I start with the same word every time. I think a lot of people do.

As usual I declined to guess the solution on the third guess and guessed a different word instead.

Yes, I start every game with TRAIN and unless I get three or more hits my second guess is always LOUSE.

Once the solution was TRAIN and it was amazing

@diana1138 I use the same starting word every day as well. stare

sigh and such a promising start too

I have always used the same opening word. At least I know eventually I’ll get an Ace. If I get 0/5 letters my second guess is always SONIC.

Played myself today as I thought of the solution first but chose another word.

Ditto for me—always the same first word, always the same second if I get zero hits from the first, and now (thanks to Quordle, which can be a real bear) a third option if the first two bomb.

Yikes I just tried that! Got all four but it took all 9 tries, took 4 just to get the first one

Do you guys start with the same word every time? I do, I was just wondering if that was me being odd.

I don’t. I have gone through streaks, and the sensible approach is probably to start with CRANE (or TRACE depending on strategy) but I feel like that approach inclines one toward missing a word eventually.

Not that I did great this time:

Because I’m using a letter-elimination strategy, so I don’t think choice three helped much because while it eliminated letters, it didn’t eliminate many words, so I’ve gotta rethink that.

and now (thanks to Quordle , which can be a real bear)

Okay, how is that game even supposed to work if the word typed in one row is populated through all four sections, how are you supposed to end up with different words?

I tried it out and basically it’s four Wordles at once, but you use the same guesses for all four words simultaneously. I did my usual first two words which let me get one of the solutions in four, then I just went through the other three based on how close I was. I managed to get all four solutions in the 9 allowed guesses, so I guess it works.

Oh and once you solve one of the four puzzles, that puzzle is done and ignores further guesses.

Here’s how mine went (THIS IS FOR TODAY SO DON’T LOOK IF YOU WANT TO PLAY TODAY): 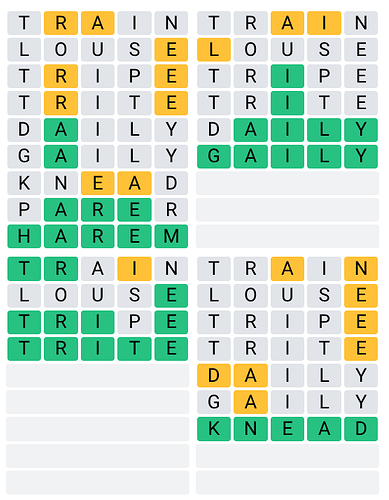 Okay, I tried that Quordle and it is a bit of a head fudge. Started it but because of the timezone I only had 5 minutes so I quit that and did the next day’s one so that I could think about my approach properly.

Thinking about strategy for it and eventually came up with four starter words: STRAY, JOKED, FINCH and PLUMB. That covers 20 different letters except G, Q, W, V, X and Z. Probably not the most optimal as there’s no doubt a combo that can use the G instead of the J. Played a few practice games and that’s worked so far for me.

I was thinking about other starter words for Quordle that cover 20 different letters.

I found this one to be very frustrating.