🦃 Today's Turkey Day Vote is LIVE! 🦃 THE HORROR OF PARTY BEACH squares off with PARTS: THE CLONUS HORROR in a Battle of the Horrors!

We are nearly at the finish line for this year’s Turkey Day picks and rankings! Today, HORROR OF PARTY BEACH and PARTS: THE CLONUS HORROR await your votes. Will Hank Green’s (no, not that one) sodium solution rise above the promise of a trip to America? The choice is in your parts… um, hands.

As a reminder, your votes will be deciding four of the episodes we show in this year’s Turkey Day Marathon, in a single-elimination bracket battle to the death! Or at least to the next round of voting!

New votes will go up on Mondays, Wednesdays, and Fridays by noon ET, and close out 36 hours later. And even when we get to your top four choices, we’ll keep voting anyway to declare a tournament winner.

I’m voting Horror of Party Beach merely because I haven’t seen it in a while!

Haven’t been to the coast much this year, so going for the beach vibe.

Parts: The Clonus Horror has smart/hilarious riffing, but is a major downer at the end.

The Horror of Party Beach is freaking AMAZEBALLS and never lets up for a second.

Make mine The Horror of Party Beach, easily.

Yeah between these two there really isn’t much of a contest. Clonus is a bleak, annoying slog. Party Beach may not be the best episode MST has to offer, but by comparison is it Shakespeare.

I call for Parts: The Clonus Horror, because of that one hilarious host segment at the end.

I call for Parts: The Clonus Horror, because of that one hilarious host segment at the end

Not gonna lie, I -do- love how they give Mike, Bridget, and Paul the “Dorf on Fishing” treatment to turn them into the Space Children. 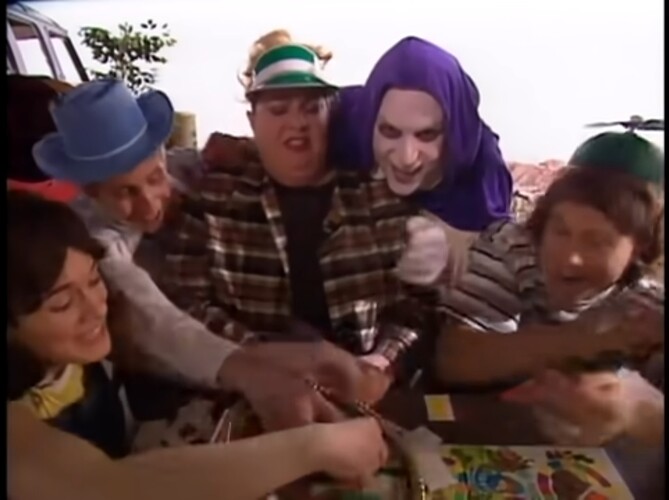 I just now realized that this could lead to the weirdest crossover film of them all:

@Lesley Can we get the Thread title updated to represent the actual matchup here, rather than just mentioning one of the contestants?

As for me, I picked Clonus. I just can’t get into Horror at Party Beach, and we already have too many kids partying on this beach as it is, what with Catalina Caper beating out Warrior of the Lost World.

Can we get the Thread title updated to represent the actual matchup here, rather than just mentioning one of the contestants?

Got that taken care of to reflect both episode titles.

Horror of Party Beach all the way!

P.S. I don’t like slumber parties now that im in my forties.

Got that taken care of to reflect both episode titles.

NO IDEA how that happened! Bizarre. Thank you.

Sleeping on the floor is a lot less cool now.

Can we get the Thread title updated to represent the actual matchup here, rather than just mentioning one of the contestants?

Yeah, I was wondering if that omission was the sort of presentation that occurs in the average White House Press Secretary briefing…

I find both of these adequate episodes but I’m not heavily invested in either one. Think I’ll just sit out this round.