🦃 Today's Turkey Day Vote is LIVE! 🦃 THE HORROR OF PARTY BEACH squares off with PARTS: THE CLONUS HORROR in a Battle of the Horrors!

In the battle of gross vs gross, gross wins!

Both are awesome sauce - Clonus was featured on TD '97, while Horror has never been in the Turkey spotlight.

Clonus is in my top 100, but Horror is the funnier of the two for me and broke into my top 50.

Plus, as a comic book geek I like that it has its own photo comic (which shows the creatures with fangs instead of hotdogs) 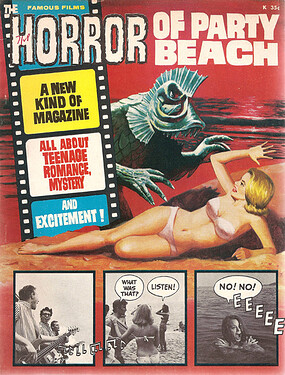 Party on, for the win

“All about teenage romance, mystery and excitement!”

And sodium! Can’t forget about the sodium!

Chances are that I’ll kick your scrawny cloned ass!

I voted for both of these episodes in earlier rounds, so this decision is like choosing a favorite child, except that I can’t just pick the one that’s obviously better and not tell the other one.

The horror is too much for me!

I think I’ll have to go with Party Beach because it’s a party and has all the hotdogs you could need for a proper Turkey Day.

This was the first vote that wasn’t a no-brainer for me, I adore both episodes, but, once again, it came down to

… toenails everywhere… DOESN’T EVEN HAVE THIS MANY TOES

This is a Sophie’s Choice…but at the end of the day I gotta go with Graves: “Parts” it is

Looks like Party Beach is going to win this one at a walk.

Good. Parts should take a well-deserved break from rotation for a while.

This is turning into a stealth Tropic Getaway Turkey Day. SO much beachiness already.

Hopefully they’ll throw in Bloodlust or Horror of Spider Island or Killer Shrews or Terror from the Year 5000 or Killer Fish in to keep the theme going.

Team Eulabelle, all the way! Now I’m off to do the Zombie Stomp

I don’t know if you guys ever heard anything about this, but apparently Peter Graves went to the University of Minnesota.

Featured on the Thanksgiving table:

Plenty of sodium there.