TONIGHT! The Mads Are Back live-riff on VOYAGE TO THE PLANET OF THE PREHISTORIC WOMEN

TONIGHT! The Mads Are Back live-riff on VOYAGE TO THE PLANET OF THE PREHISTORIC WOMEN and welcome Blaine Capatch for a post-show Q&A!

A $10 tickets grants you livestream access AND a download to keep forever! PLUS: we’ll reveal December’s movie! 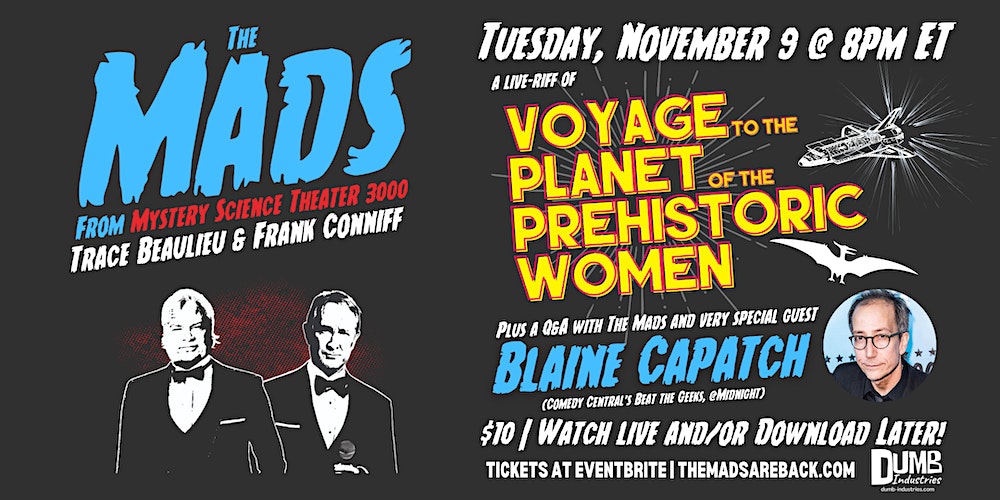 The Mads: Voyage to the Planet of the Prehistoric Women w MST3K's The Mads!

The stream just ended, and thanks to my youtube algorithm, I got this image:

And they announced at the end that next month’s show is “Manos”!!!

I just finished watching the show, and they announced the next one in December will be: MANOS!!! With Jackie Neyman as their special guest, no less! We’ll see how a third riff on this will go.

Trace Beaulieu IS Cerebus the Aardvark!

Just watched this myself. It was very enjoyable. Can’t wait for the next live stream, “Manos”!

Demon Slayer is a great Anime, not sure how it relates to the Mads though.

The demon which they strove to slay is: soul-crushing boredom.

It was a valiant fight. That movie was so tedious that I longed for rock climbing.

Honestly, between the analog driven ‘future tech’ and an omnipresent narrator, I found the film very watchable… I mean, the robot in lava and tiny fighting dinosaur people alone are worth the tab of aci–price of admission.

I also really appreciated the lead-in explanation for the film and that there are apparently more different cuts of this film than, say, ‘Bladerunner’ :3

For me it was a bit of a slog, I’m looking forward to the vod so I can torture myself again!

Obviously an anime where one character can’t speak has loads to do with some guys who do nothing but speak at a movie!

what gets me though I only watched a couple episodes of it 2 years ago!

is there a place to easily view backlogs? never did check them out.

Their YouTube channel has some of the shorts. You could start there.

“Not my favorite cut of Bladerunner”

They are doing reruns of previous shows. The best way to catch them all is to purchase a ticket and then download the show afterwards

Here is the latest rerun: 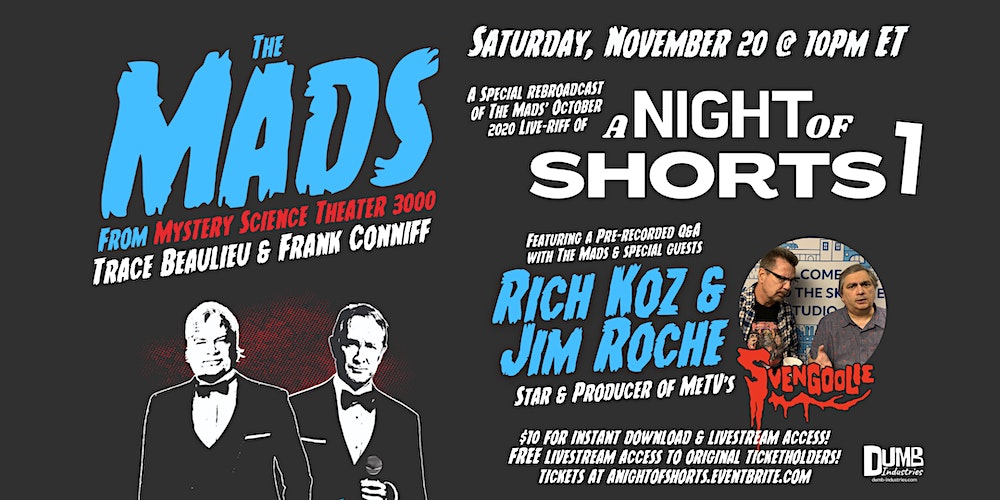 The Mads: A Night of Shorts 1 | Re-broadcast watch party!

A rebroadcast of The Mads' riff on A Night of Shorts 1 from October 20, 2020! Purchasing a ticket grants you INSTANT DOWNLOAD access.

Here is the link for next month! MANOS!!!