I was thinking recently about the days of the video rental store or more precisely one store in particular that was local to me in the late 80s. It was fairly small and dingy with stock along two walls and a little alcove in the corner next to the counter. There wasn’t any shelving on the shop floor as the floor space was too narrow. I used to enjoy it when every couple of weeks or so I’d get a couple of quid to choose a film for the weekend. I had to make sure and pick something from the right-hand wall though as the other one had Betamax tapes although I didn’t know what that meant then lol. I recall some sort of promotion related to Iron Eagle II (I think) involving a little DIY plane although I don’t think you had to rent that film specifically to get one. IIRC it was a sheet of paper or cardboard with cutouts you folded and put together. I haven’t been able to find anything on Google about it though so I may be confusing it with something else.

Surely the most memorable thing though is the covers for the films. I was too young for the horror films but I sure liked looking at their cases which were in the little alcove at the back. Here’s a few that really made an impression on me.

Fright Night is one that I thought looked scary as Hell with the clouds forming a demonic face over the house. Still freaks me out a little bit. 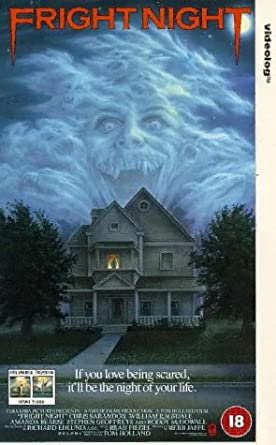 Ghoulies 2 really stood out because there’s little creatures coming out of the toilet along with the slightly naughty tagline of “they’ll get yours in the end” as goolies was of course a euphemism for testicles (can’t say I’ve heard it in a long time though). Also made me paranoid to go the toilet in case a monster grabbed me in the nether regions so for a while I checked the bowl first just in case. 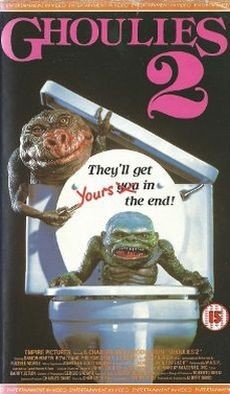 I just love the colours of this Evil Dead cover. A lot of horrors are quite cold looking but this one is vibrant and lively. 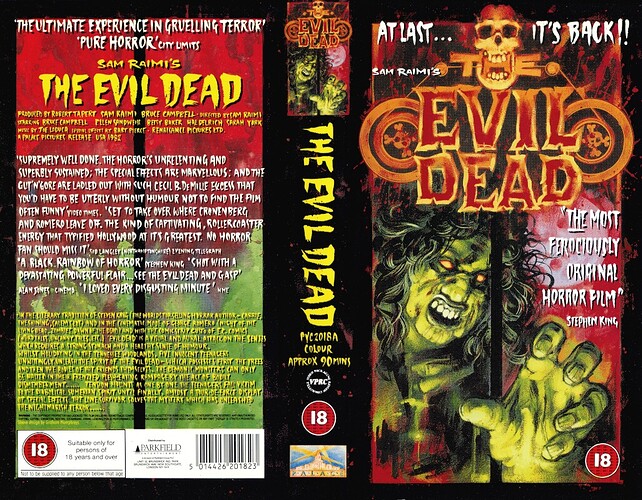 I don’t think any cover commands your attention like Hellraiser does. This super-freaky looking dude snarling at you is really unsettling. 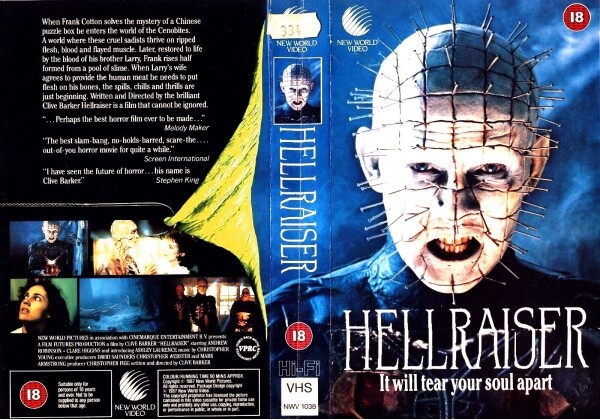 The convenience and availability of films in the modern age is great of course but I still miss that time when choosing a film was an event in itself. I don’t know if there’s VR software replicating a video store environment but it feels like something that should exist.

So, what are your video store memories and which covers did you find the most memorable?

Can I just say that I love this topic?

When I was but a wee youngin’, there was this mom-and-pop video store in the area, and that place was RIGHTEOUSLY DOPE.

We’re talking a building that had two floors. TWO FLOORS! There was something about that that got you hyped to check out all the different film choices there… 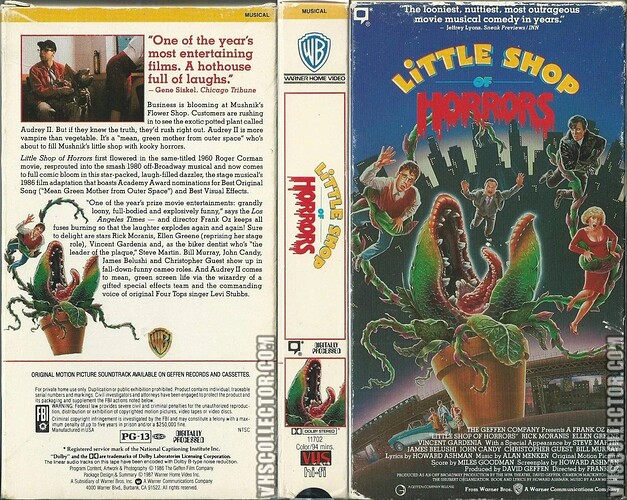 … even though we ended up renting the hell out of the musical version of Little Shop of Horrors more often than not. Heh, we should have owned that damn movie for all the times we rented that.

But yeah, when you were knee high to a grasshopper, being in a video store that had stairs gave the place this sense of grandeur and spectacle. It felt like freaking magic.

And the lobby had those wonderful early 80s arcade machines. I remember loving the absolute hell out of Mappy.

The whole experience really made you look forward to venturing out and finding something, anything to watch.

My best video store memory, isn’t about the store, or the film selection. It was another local owned shop, my then-boyfriend (now husband) and I ran in just as a thunderstorm was brewing. We got inside, and not two minutes later, a lighting bolt hit the parking lot outside the store.

No one was hurt, and no cars were damaged, but man that was surreal.

Box art included, but no movies, obviously. You can always float a desktop window and stream from whatever services or local files you have available. Apparently there’s a theater room in the back, so you don’t have to watch everything on the tiny demo TV.

This freaked me out when I was 8 years old around the time HBO and Showtime started playing it. This was actually cool looking to me, though. Fitting, since the movie is more humorous. 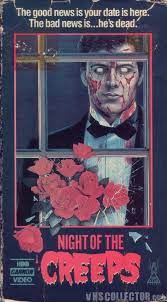 If we’re talking covers (and let’s remember for the purposes of this thread to be careful about going with covers that may go gory or TOO extreme), I remember the back cover of Dawn of the Dead freaking me out. 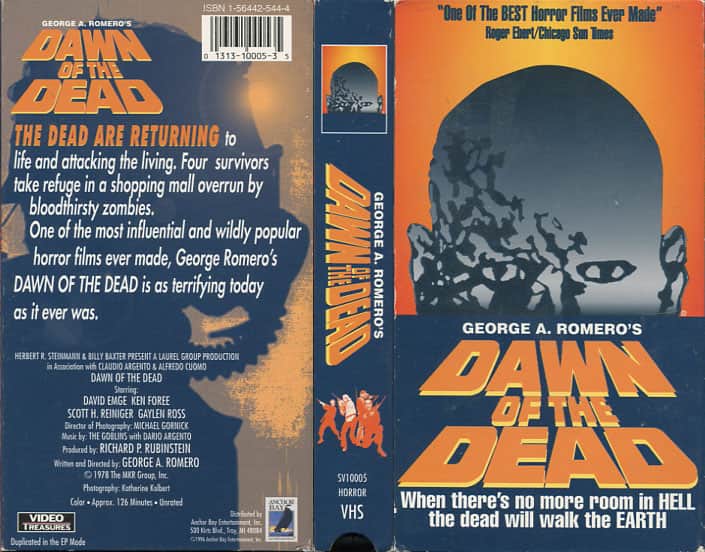 Until I turned the case around and saw that ominous-looking silhouette and the movie’s Unrated status. I didn’t know if I could handle the movie and I stayed away from that for years.

Shame, though, because I would come to love the hell out of THAT movie, too. But man, that VHS case shook me up for reasons I can’t really pin down. Maybe chalk it up to fear of the unknown?

I would give a lot of credit towards Suncoast Video in my development as a MSTie!

It was always fun to go over there and see what episodes they had to offer!

I would give a lot of credit towards Suncoast Video in my development as a MSTie!

It was always fun to go over there and see what episodes they had to offer!!

Oh, man… Suncoast Video was INVALUABLE in terms of taking the MST3K obsession to a whole other level. The whole store was great (they really tried hard to educate folks on the whole widescreen vs. pan-and-scan issue), but it was their championing of MST3K that I adored.

Ours had this great black-and-white fixture of Mike and the 'Bots hanging out on the SOL bridge on one of the walls. Heh, had our Suncoast not been run by a major MSTie, I would have asked him if the store had any plans for that particular fixture!

My father bought a video store then hired me to run it. It had debts, but we stopped the bleeding and got it healthy again.

It was the only job I ever loved; and in regard to specials or promotion or design or product, I had free reign to do what I wanted, which was great, but I always kept us under budget, while still making improvements. (Our foreign film section was second to none for example)

And this was at a time when it wasn’t all sell-through product, you still had rental only VHS, which was pricey (so new releases rentals carried the day because I wasn’t making a lot of $$ on foreign fare) 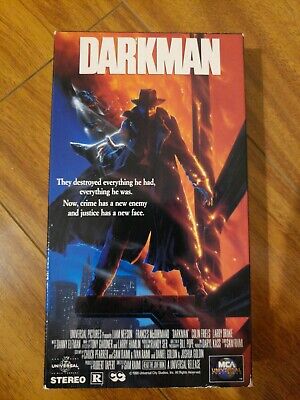 I remember a Darkman display we created - we set up a lab, with lights and standees and posters, and dressed our mannequin up as him. Then on the weekend of release we had Darkman wandering the store, handing out coupons and snacks, that wound up being me dressed up in the mannequins’ clothes… so I would sometimes stand where the mannequin was, very still, then move just a little, for a laugh.

The kids were a kick, one asked me if I knew Batman, and I remember a little girl who was worried about my owies (all the bandages) I had to assure her I was okay, and my owies no longer hurt at all.

It was great fun; I just adored that place. Unfortunately, the corporate giants eventually came to our little town and buried all of us mom and pops operations.

Surely the most memorable thing though is the covers for the films.

Mom! MOOOM! Can we get this movie? It looks SO COOL! 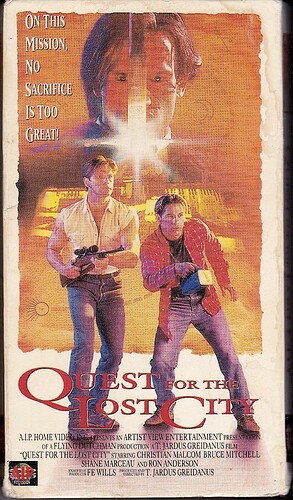 a.k.a. The Final Sacrifice 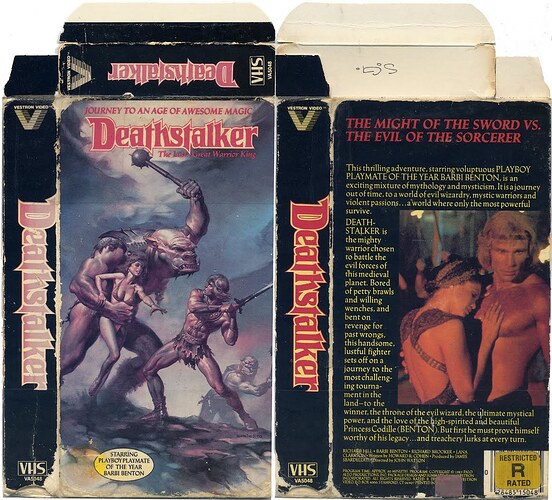 Which reminds me of when Sony released a bunch of Kurosawa movies, not the usual big names like Seven Samurai, but a lot that weren’t easy to find in those days. So, I was happy to finally get to see them.

With handsome packaging which replicated a rice paper background 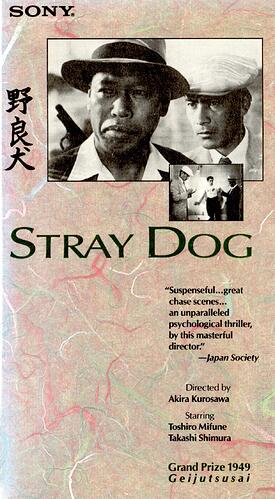 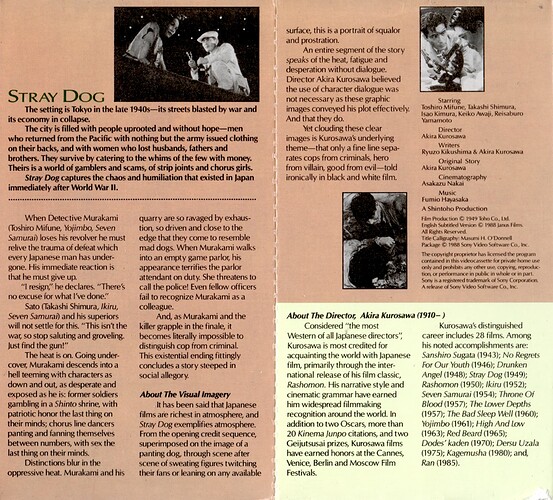 Around that same time, they started releasing the Outer Limits - we used to get all these promotional materials sent to us, and I still have the flyer/booklet for these releases, I held onto it because it was so a nice looking.

One of the covers. 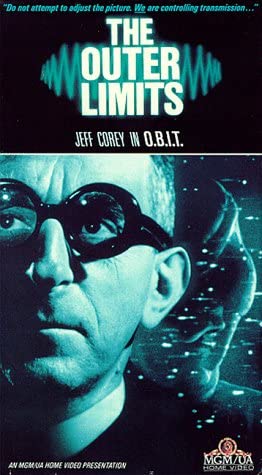 And of course, I started renting and buying these when they were released… 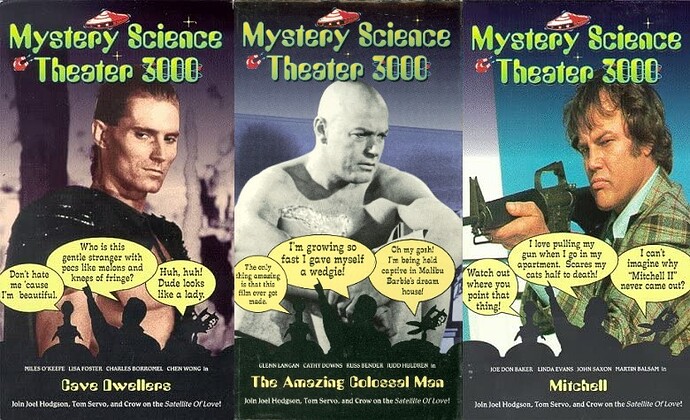 My favorite memories of my local video store involve renting video game cartridges (NES, Gameboy, Super Nintendo). But, there were plenty of VHS tapes that we rented too.
I even remember renting a VCR to play the tapes before we owned our own.

I never had a local video store when I was growing up, but when I left school and moved to London, the newsagent across the road had a brief period when he stocked some VHS cassettes. An odd selection - many of them were Jackie Chan movies*, which was my introduction to the man’s work.

*it was the early Nineties, so these were the good ones - films he’d made before he got old and slow and started pandering to the American market.

Honestly, I’ve always disliked the MST3K boxes. The riffs they put on the cover are terrible. And not in the episode anyway.

An odd selection - many of them were Jackie Chan movies*, which was my introduction to the man’s work.

*it was the early Nineties, so these were the good ones - films he’d made before he got old and slow and started pandering to the American market.

If you are only familiar with 1990s Jackie Chan, I highly recommend checking out Drunken Master (1978). It is my favorite Jackie Chan film. There is an English-language dub, and it is free to watch (with ads inserted) through various streaming platforms.

Does a favorite Jackie Chan film count if he is a minor character? Because mine would be The Killer Meteors, which is so ridiculous that I couldn’t stop laughing.

I remember the value of knowing the person working behind the counter. They could tell you what movies were good, but also, they could hide a new release behind the counter for you, or at least give you a heads up to hurry up and grab it when it comes back in.

Yeah, they were pretty ugly, I much prefer the art on the SHOUT! Factory discs.

I meant the shop stocked movies he’d made up to the Nineties - there were plenty of the early ones in stock, including Drunken Master.
Looking through Jackie’s back catalogue, other titles I remember from then include Snake and Crane Arts of Shaolin, Island of Fire, Dragon Fist, Armour of God, the Project A and Police Story films, as well as City Hunter which was the newest at the time.