We Need to Have a Third MST3K ConventioCon ExpoFest-A-Rama One of These Days...

I saw some people in here talking about how cool the footage of the old conventions looked on the MST Scrapbook tape, and it got me thinking? What would a third ConventioCon ExpoFest-A-Rama look like? We already had the original, and ExpoFest-A-Rama II: Electric Boogaloo, so what would we call a potential third one? Where would it be held? What kind of panels and events would you want to see? What sort of costume or cosplay would you wear? What flavor would the punch be? Let’s discuss!

Great line of questions, this!

You know what looked great in that MST Scrapbook footage? (I mean, besides everything in general, of course.) Those MST3K screening rooms. They’d have these rooms set up where they would have episodes playing, and a whole bunch of fans could enjoy an episode at any one time. If what I heard was accurate, the designated area for Manos was standing room only. I could believe that.

But the fans there looked like they had such a great time watching that all together, and it was something so cool to see fans of all different walks of life unite to enjoy some episodes. You see the spirit of that still very much alive with these premiere events and watch parties and all that.

Yeah, those do look pretty sweet. (Especially since a lot of those screening rooms were for Season 1 episodes which Best Brains were still not comfortable rereunning on Comedy Central at the time, so it was the first time a lot of MSTies saw those episodes.)

I was at II. Can confirm it was excellent fun.

I was at II. Can confirm it was excellent fun

I think Australia would be a good central meeting point to hold it.

Only on the agreement that there is one dedicated room that runs nothing but Alien from L.A.

I mean, there always is.

What kind of panels and events would you want to see?

It would be great if they could work in a celebrity panel that would incorporate stars/creative talent from the new era films. Or maybe a mix of classic and new era talent?

jealously pouts
Why can’t they have an MST3K convention in Seattle?!

I mean, there always is.

It would be incredible to have another one.

Definitely what I’ve gathered from the MST Scrapbook tape, for sure!

If the costumes were so good like that for the first convention, I can only imagine that everyone really stepped their game up for the second one!

It would be incredible to have another one.

… but at a couple points, folks said the very same thing about MST3K’s return…

My dream would be a multi-night event with each day culminating in a live riffing event. The Mads, Rifftrax and MST3K would all have a closing show.

Extra unlikely: A night that is a double feature reunion of Cinematic Titanic, riffing The Doll Squad and the Samson movie they did.

There would be daily panels, maybe riffing classes, a show floor set up with indie filmmakers. Maybe some actors from riffed films doing signings. Photo oops and more 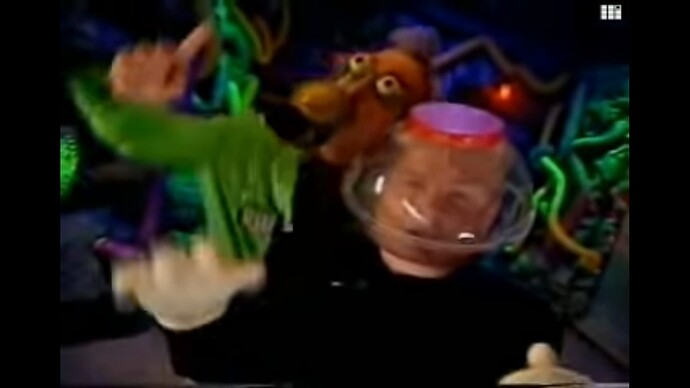 THIS would be sharp… something of an in-person take on the online stuff that was set up through the Kickstarter. (And those workshops that Joel would do from time to time.)

My dream would be a multi-night event with each day culminating in a live riffing event.

Some live musical numbers and host segment nuttiness, too!

The MST Alive! show at the end of the first con was epic. It was the first time they ever riffed “This Island Earth” in a public setting, and it had a lot of riffs that ended up getting cut out of the movie. It also had one of the last big Frank moments before his departure with his inspiring interpretive dance to “Let Me Be Frank About Frank”. There was supposed to be a fourth MST Alive during the second ExpoFest, but it ended up cancelled at the last minute when Trace announced he wasn’t coming back for Season 8. (He was still at the second con, though)

So last night I had a dream of attending the third MST con (while constantly trying to keep up with my girlfriend there who was involved in some sort of watergun tag war) but I remember trivia contests, celebrety panels, dealer’s room, lots of screenings and people sliding down firepoles…(obviously the last one was more dream, but imagine a slide that took you through a Movie Sign Door sequence of your choice!)