It’s good advice… but everyone who hasn’t completed it still gets direct email reminders every few days, which we’re hoping solved that particular problem.

Hmm, yeah you’d think that would do it.

Well I guess I know I got mine submitted!

Too bad I can’t say the same about my dinner order.

I see the vendor used the Joel Robinson with glasses.

Love the improved version of the patches. The other ones can be used on “stunt jumpsuits”

Is Jonah directing all of the episodes, or was he only the director for Emily’s?

I’ll be taking over directing duties for Jonah’s episodes, so he’s not put in the very strange position of having to give acting notes to himself.

Will you be directing the holiday special episode with all three hosts as well???

TBD! We’ll see how I do with Jonah’s crew. Who knows, the power might go to my head and I’ll spend the entire shoot yelling through an old-timey megaphone. It’s a distinct possibility.

if you’re not wearing a beret and holding a riding crop can it even be considered directing?

I have a question about the Kickstarter rewards and not really sure where to ask. My mother just passed due to cancer and I’ll be moving soon but I still am not sure of where or when. I really don’t want my rewards to be lost in the mail. Is there a specific link someone knows that I need to update my rewards address for MST3k or would updating my info on Kickstarter work?

And the bloomer-ish beige pants! And I’m hoping he grows out a very curly, thin mustache!

The backer kit page should be your best bet. 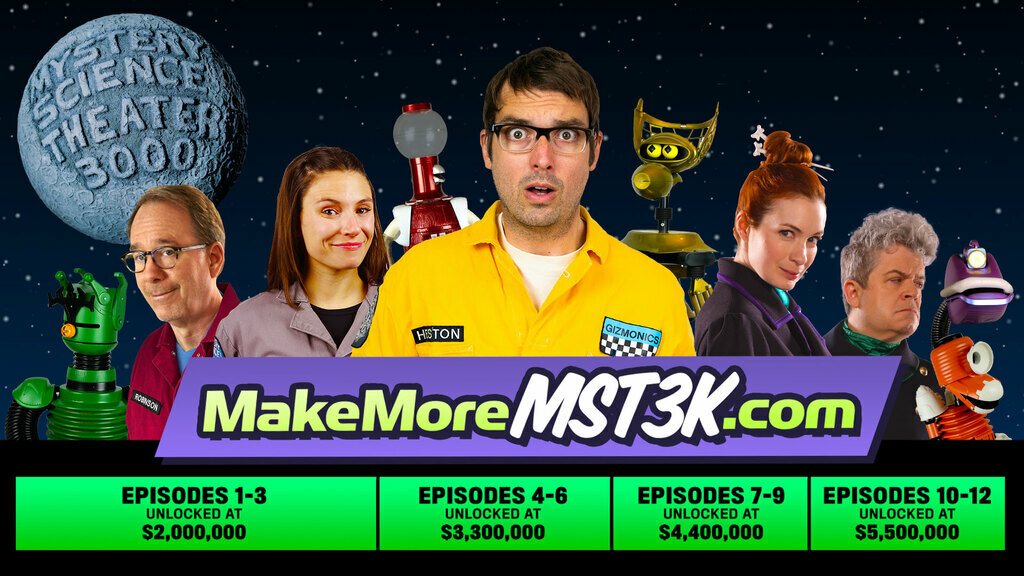 Together, we can #MakeMoreMST3K AND #BuildTheGizmoplex, an online theater for live screenings & monthly special events!

Or send an email to kickstarter@mst3k.com explaining your situation. Ivan and the rest of the team respond pretty quickly to messages sent there.

My mother just passed due to cancer and I’ll be moving soon but I still am not sure of where or when.

Hey friend, I think others have pointed you in the right direction to update your info but I didn’t want to let this go unaddressed.

I’m really sorry for your loss. I lost my mom to cancer in September. It’s the worst. It absolutely sucks and there’s nothing I can say to make it better, but you’re not alone. May her memory be a blessing.

i was just thinking of the patches today and if there was really a mystery patch like the twitter post says, i’d really hope it was a pearl one for her .25 for delta knights. as a pearl stan, i’d be so happy.

Per the November 6 update, it looks like others have received their “backer” status/badge. Is there some other step I need to be taking to get mine?

Not sure the batch update has been done yet. Some folks have had it for a while as Ivan was doing it by hand one-by-one at first.