What episode (or episodes) have you watched recently?

My end-of-the-month tradition: Spent today watching all the September Synthia Selects bumpers and the Gizmoblips!

We’re back on track with the complete series rewatch!

This one is a gem. I have more of a nostalgic tie to the prior movie/episode, The Amazing Colossal Man, as it’s the third episode I watched (after Alien from L.A. and Pod People), but I’d have to view THIS one as the superior episode. Just a darkly tinged hoot from beginning to end. It’s like they’re taking a short feature and streeeeeeeeeeeeeetching it out, giving it all the morbid jokes that one would expect from an innocuous short on this show.

Having “Mr. B. Natural” as part of the festivities goes a long way towards that verdict, too!

My other new tradition: Re-watched The Million Eyes of Su-Muru and the two promos for The Shape of Things to Come!

Just finished watching all the October Synthia Selects and the Gizmoblips!

Good, as always! Saying it again: These really are an excellent way to enhance classic episodes!

The Shape of Things to Come. Once again!

Gosh, this episode is so great! Still so delightful.

I’m watching the Ring of Terror vault pick. All the middle-age jokes are hitting too close to home.

Watching The Dead Talk Back on Synthia’s Selects.

Gamera vs Jiger. Getting caught up on the new season.

Really is such a spectacular presentation!

What a coincidence! I also just watched MST3K: The Movie! It’s a shame they had to shorten it, but what’s left is pure gold. I also discovered that the Shout Blu-Ray has like 20 minutes worth of deleted host segments and extended riffing scenes which are worth a look.

Kiss the Bird. Kiss it!

Taking inspiration once again from a discussion thread: Tonight I put on Space Travelers!

This is pretty decent in a “tranquil” sort of way. If you’re willing to be patient, this one does deliver the riffing goods. It’s certainly quite a plunge to kick off Season Four!

And yes, their Gregory Peck impersonations are the best! Those are worth watching this episode for!

Just watched The Amazing Transparent Man again, and was howling at the “matches for Mikey” sketch. It never gets old! 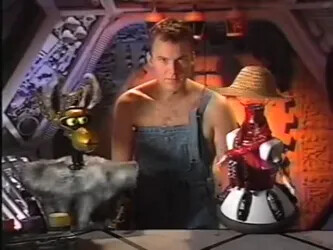 Perfect timing as part of the rewatch, too, given its inclusion in the Vault Picks for this month!

This is a comfort food episode, pretty much. Although the riff tempo is a little slower and the riffs aren’t quite at the black belt level as we saw earlier this season, there’s still something about this one that resonates with me.

Perhaps it’s the nostalgia factor of being one of those early Rhino VHS tapes?

Anyways, the episode has that “kick back and relax” quality, and I dig that. And those shorts are skewered pretty well here!

My upcoming new episode tradition: Just re-watched The Shape of Things to Come and the two promos for The Mask 3D!

The Wild Rebels, via Rifftrax. Fun episode with great host segments. Movie was satisfyingly stupid but at least coherent!

My end-of-the-month tradition: Re-watched all the October Synthia Selects bumpers and the Gizmoblips!

So good! Looking forward to what November will bring!

The Mask 3D. On Halloween.

Just makes sense! This is so much fun!

Got the November Gizmoplex Vault Picks and Gizmoblips watched!

Wow, are these fantastic!