WHAT IF...MST3K was never cancelled?

A while ago, someone asked what would have happened if Rifftrax bought MST3K?
This reminded me of a blog I wrote speculating what if the show was never cancelled by SyFy.
Naturally, I predicted Mary Jo as Pearl would get a taste of her own medicine, and had some other ideas who would have hosted.
Please take a look: 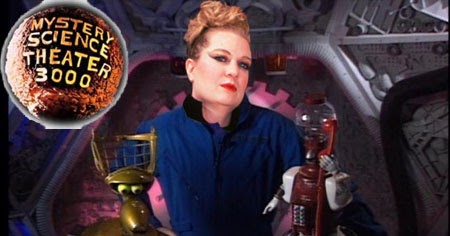 In A Not-Too-Alternative Future, What If MST3K Still Existed?

As the revival of Mystery Science Theater 3000 revival  is poised to hit its first goal of $2 Million, let's take a look at what he ...

It’s an interesting question, and I don’t have a reply as involved and imaginative as that blog post, but it’s something that I’ve wondered about.

It seems like MST3K (and television in general) changes very incrementally while it’s doing a year-over-year run, just sort of locking into a status quo and not really shifting the premise all that dramatically. What changed when Joel left the show? The invention exchange was phased out, and Dr. Forrester introduced an umbilicus to physically tie the SOL to Deep 13.

But then you look at the break from Comedy Central to Sci Fi. Much bigger change to the premise. Pearl was re-designed and repositioned to be the main villain, the show moved into the slightly-more-distant-future and to other planets. Yes, there were a number of different factors involved – Trace left the show, the Sci Fi Channel was issuing dictates, they needed a way to come back from the “series finale” nature of Laserblast – but I guess I can see a world where Comedy Central never cancelled the show and Trace’s departure was handled by, oh I don’t know, Kevin and Bill dressing up as mad scientists, moving into Deep 13, and just keeping the same status quo the show had always had.

Would Season 11 have looked the way it does if it weren’t for the fact that they had to completely redesign the show from the ground up? Would the show have moved to the moon? Would we have Kingachrome and Ardee and tubes sucking people around from location to location? How long do you think they would have stayed in Deep 13 before they thought, something has to change to shake up this formula before we go insane?

I guess my thoughts are more about… there’s a certain creative stagnation that comes from just trying to keep up the momentum of something that already exists, and maybe you don’t really get the opportunity to catch your breath and consider alternatives until that treadmill stops. I like when MST3K is running regularly, but I also like when they take bold new steps with the formula, and I don’t know how compatible those two desires are.

And really, ultimately, the thing that I want the most is that the people who are making the show get the opportunity to keep making it for as long as it still interests them. Because I get it, you do something long enough, eventually you’ll want to do something else. As a fan, my hope would be that the people who step down will have someone new to step in to their place, but y’know. Life’s funny sometimes.

Absence makes the heart grow fonder.
Maybe being cancelled before it burned out is what made bringing MST3K back possible. They went out still riffing and still full of ideas in 1999.

I mean, it’s an interesting thought. My biggest question though, is where would it air? Because a show like this is expensive for something that is as unconventional as this. I’d almost half figure there would have to be something like the Gizmoplex and there’d have to be the money and technology to make it sustainable because pretty much no network is going to want to keep this running for decades on end.

That being said, seeing the premise change over the years would be extremely fun to watch. Let’s see where Jonah and Emily go…

Under my What If, it would be safe to say it would stay on SyFy, but we could speculate it could have gone to IFC If Rikk and his Incignito Cinema Warriors just kept the show going a little longer,
This is all based on Joel thinking the show would go on with different hosts.

We’d all be sitting here lamenting how the show’s funniest days were behind it 15-20 years ago, and it’s a shame no one has the nerve to pull the trigger. Y’know, just like how everyone talks about The Simpsons.

I suppose the take the blog post has is as good as any on this?

I have wondered what would have been different if the show had just been canceled… later?

In 2000, we were just seeing the birth of podcasting/netcasting… And, except for rare occasions, that was audio only… Some began to live stream video feeds of the sausage being made later…

The infrastructure just wasn’t quite there yet for something like the Gizmoplex to happen… And, most people just didn’t have the bandwidth to watch streaming video… or had obnoxiously low bandwidth caps… (some still have these issues today actually)

But, if it had stayed on TV longer?

Think about your favorite youtube creators and think back to when they started… on youtube, Twitch/JustinTV, Stickam? Could MST3K have made a space for itself in that time, and built on that until we had something like the Gizmoplex we’re lucky to have today?

I AM NOT THE WATCHER…
but that’s interesting. I didn’t think about that when I wrote the blog six years ago.
Remember Rifftrax began with CDs of riffs we had to match up with the movies. The closest thing we had to riffing with our computers was the Home Game special on SyFy just before the show resumed there.
If it had lasted until 2004 (when Mike served for ten years), Rifftrax would have picked up the slack. I think the earliest a Gizmoplex would have been done is 2012, but it would be a one-off on a Turkey Day.
My blog was just based on the show staying on cable, but it could have tried to release a DVD of MST: The Movie 2. No one thought that online broadcasting would be practical or even better back then. Eventually, we did.

So, does anyone think Growler and Waverly will find something unexpected in the next new live show?

I wish Mst would have gone the Svengoolie route, syndication! They may have stayed relevant all those lost years. Imagine, seasons 11- 19!

The issue with that is that such an approach would be really awkward with MST3K because of the host segments. As well as the inevitable ad breaks.