Back at work and apparently that Amazon driver wouldn’t even take the products sitting on the dock. All product had to be ‘dry bed’ loaded so the remaining returns In the storage room that were still in our postal equipment were the ones that were loaded piece by piece into the trailer floor by hand.

I predict your favorite lady at work will recognize the error of her foolish mandate and offer profuse apologies, accompanied by Irish coffees and lemon bars at the fellowship hall!

Even the people driving cargo vans with Amazon livery: they don’t work for Amazon! We just try to punish them when they do bad!

ANYWAY pretty mellow day at work…except for some doofus flex driver who drove onto the drivelane while the vans were lining up! There were some very harsh expletives used, including by me, out of sheer surprise (not directed at that fool), such as “mothercrabbing stuff, what the effing hockeysticks in the stuff is going on that joker son of a mother!” Jump on the two-way and am like “Stop traffic Mark, we got a bogey in the drivelane!”

Pretty sure he might have soiled himself after one of my supervisors ran over and read him the riot act.

On the good news…well…I survived another day? I guess that’s good!

And I got to play macho man and take over a super heavy cart for one of my gals (no, it’s not like that…she’s married with children, we’re just friendly at work). I like doing that, because it makes sense to me: I’m big, and if it’s a big cart, just let me grab it! It’s no difference to me, and it just seems reasonable.

I predict your favorite lady at work will recognize the error of her foolish mandate and offer profuse apologies, accompanied by Irish coffees and lemon bars at the fellowship hall!

Even the people driving cargo vans with Amazon livery: they don’t work for Amazon! We just try to punish them when they do bad!

Nah the postmaster is a complete idiot! She was kicked out of Pennsylvania for her stupid ways and now we got her

Plenty of doofuses to go around! Never a shortage around Amazon!

Found out today that no matter how well I do my work, I cannot receive any kind of physical award for the stuff I produce.

For reference: members of my team today received a commemorative coin from our overall boss for work they did in relation to a recent event that we had to shift to 24 hour ops to cover (I wasn’t there during the event so I wouldn’t have gotten it regardless), and apparently the contractors who were involved cannot get the coin because it violates the terms of the contract.

Most I can expect is a couple of words of praise and maybe the occasional written kudos. Don’t get me wrong; I love being a contractor most of the time, but I will miss not being able to get awarded a coin if something I do is worthy of that.

So something has been bothering my coworker and I finally found out what it is…
There’s a supervisor she’s had problems with going back about 12 years and apparently she is up for a vacant supervisor position at our office. She wouldn’t go into a lot of detail but apparently this supervisor was very verbally abusive towards her. She’s also friends with that idiot redneck custodian and he apparently put a good word in for her with the postmaster.
It’s been bothering her so much that my coworker decided to have a talk yesterday with the postmaster about her and requested that she not be considered for the supervisory position in our office because of their past history but I’m afraid that may have just done the opposite… Our postmaster likes people that cause chaos and with my coworker letting her know about her troubled past with her, she’s probably going to get the job now.
It’s been bothering her so much that she put in for time off for a doctor’s appointment this afternoon because her stress level is through the roof after talking to the postmaster about this issue.
Probably why she was blowing up my phone so much Wednesday while I was off getting my generator project wrapped up at my house, she wanted someone to talk to but all she was texting about was work related stuff that I was just not wanting to hear about on my day off… 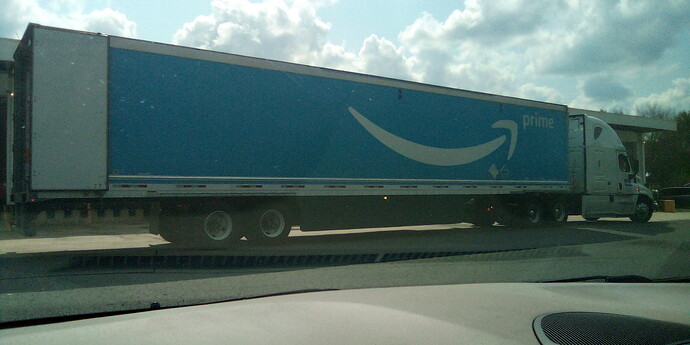 2304×1152 557 KB
I was in no hurry to clock back in but by 12:30 I talk to the supervisor and for once the postmaster used her single common-sense brain cell and told us we were not allowed to step foot inside their trailer because of liability issues and Amazon would have to bring their own personnel to load the trailer.
Well once again the driver was by himself and he said he was only contracted to drive to and from our location and was not responsible for loading the trailer either so we were at a stand still.
The tractor trailer was still sitting there with the remaining product sitting on our dock when I left at 1:30pm

Amazon would have to bring their own personnel to load the trailer.

I really shouldn’t have laughed, because I’ve seen and heard about all the chaos over there.

I gotta say, I really suspect you guys are going to be stuck with those returns for a long, long time. I just don’t see an easy solution at all. I doubt the driver is going to be willing to give a lift to one (or two, if they can fit in there!) Amazon employees, probably for liability reasons as well, or he may just not want to.

Amazon could pay some of the contracted van driver companies to do it, but that would, sounds like take nearly a fleet of large capacity vans. Likely the companies won’t want to do it without some serious coin, if they even have extra vans/drivers (doubtful), and Amazon is tight with a dime in any event.

Does Amazon really care whether they get that stuff back?

Just put a “FREE STUFF” sign out on the road.

We said the same thing. The rumors are spreading that we may have a free-for-all very soon if that crap is still sitting on our dock much longer…
I got my eyes on a couple of things already

Yeah, I don’t think Amazon much cares. If I’m reading the situation right, these are 3rd party sellers, but shipped by Amazon Logistics.

I still don’t know why Amazon can’t be forced to pay storage daily: that’s the only thing I can think of that would motivate them.

And there’s mondo liability issues as well when Amazon employees are working outside of their tightly regulated environment where they have complete control over safety issues. They’re certainly not going to trust some Tier 1 grunts with that, and very doubtful they have spare Area Managers/Regional Managers/Process Assistants to supervise.

If I’m reading the situation right, these are 3rd party sellers, but shipped by Amazon Logistics.

Yeah I’m just waiting on the word to come get some Free Sh!t!

The risks of asking someone to put those boxes on that truck are enormous.

Came in this morning and that product is still sitting on the dock👀
I think we’ll eventually send it all to our ‘dead letter’ center in Fulton county GA.
I guess we’ll see what happens next week

It’s actually an auction. Highest bidder gets a pallet of crap!

I already have a garage. It isn’t the world’s largest, but it is a good size for me.

Been a while since I talked about my Product Reviews I do for Amazon sellers…
Been working with several new sellers as of late and that has been going well. One seller is sending my some snow boots to review. We don’t get much snow here in the central Carolinas but ok I’ll provide a product review of them. He also is sending me a couple of hats to wear for the video shoot… Ok, I’m reviewing a pair of boots so getting me wearing a hat will make it a bit more time consuming but fine.
He lets me know they shipped in this email:

Good Oh, we also send you 2 hats, remember to wear this hats I send you when shooting Oh

What, am I talking to a Pokemon here??

Then I back to dealing with another seller that micro-manages my video reviews that I thought I was done with but kept asking about a Halloween table cloth that they never sent a month ago. Told him 4 Times that I never received it and after the fourth time I told them not to bother sending them because my wife has already setup her Fall and Halloween decorations on our dining room table and she’s not going to take them down just to shoot this product review video…
Next thing I know the table cloths (2 pack) just show up out of the blue despite me telling him it’s too late to shoot them now. I let them know I received it and he wants me to shoot a video as soon as possible. So I setup a table outside and make a quick one minute product review of one of the table cloths but there’s construction going on down the street so it’s kind of noisy but shoot it anyway. Sent him the link this morning and this is their response:

Hello,
It was not shot as required, and needs to be rectified as follows: 1. The video of the Internet celebrity unboxing, there are two in one bag
2, product advantages, waterproof, thick, good use can be used twice
3. Design Cute, suitable for rectangular table
4. Don’t shake the lens all the time, the original noise is too big

My response:
See, THIS is what I am referring to about issues and differences making product reviews for you in the past:

An image of one of the parking lots at work midday. Not much happens during the afternoons. 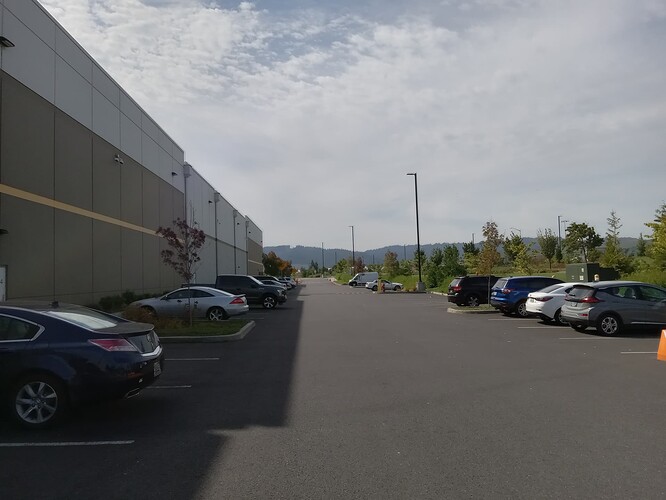 HEY! I know where some product is to fill those empty parking spots

asking about a Halloween table cloth that they never sent a month ago. Told him 4 Times that I never received it and after the fourth time I told them not to bother sending them

Perhaps they were mixed in with a bunch of other Amazon packages at a certain post office?