Are you guys in a union?

Yep and I’m the local shop Steward. The postmaster knows this and won’t ask me to do things that cross crafts.
I’ve told her to stop doing her bidding when ever she tells her to do stuff outside our craft and when I threaten to file a grievance she doesn’t want to cause any issues between us.
The postmaster takes advantage of her OCD to get projects done that she doesn’t want to do all the time.

Another thing, I’m feeling rough from getting my flu shot, 4th COVID shot, and dental work yesterday…
I probably should not have come in today

What’s happening at work? Lots, most of which I can’t illuminate you on, but we had an early costume contest today and I dressed up in my Jonah jumpsuit and brought my Tom and Crow POPs to work to be my robot companions.

So some random “Safety” consultants made some recommendations for our OTR Dispatch. There were visiting ASC/Safety people, as well as some L7 leadership (L7 is pretty high on the pay grade, sort of like the military, I guess…maybe a Lt. Col. or something in the Army, or even a full bird Colonel).

I already have the megaphone…not sure why I need the whistle. It is loud as hell, probably accelerate the loss of my already kind of mediocre hearing. I’m going to have to put in earplugs, I think: it’s not healthy to be that near a damned metal whistle. Not the way I blow it, anyway!

But the whistle is fun. I can annoy my coworkers with it. And have already done so!

Trust me, they love it!

And I can use it at home to annoy my loathesome neighbors! I luff this country! Amerika gonif!

The stars aligned, and I got to spend a day doing Blender for work. Much more fun than my actual job description.

Key words are at work. TDS has a major outage going on, causing me to have sh!++y internet service so I had to come to the office on a WFH day.

So apparently my union and the postmaster of my post office were in discussions about updating our daily/weekly procedures called a Local Memorandum of Understanding (LMOU) or the post office’s version of Standard Operating Procedures (SOP) and our post master slipped in a couple of changes that were not caught by my union president and both have since signed off on them and cannot be altered like:

As the local shop steward I should have been included in these discussions/negotiations but was not. Now that it’s official it cannot be changed. So my coworker and I are going to have vacation conflicts with the other 2 maintenance guys at the other office next year. I am the ‘low man on the totem pole’ so to speak so I can see I’m going to have some problems with management when I take my choice vacation time. I’m already planning to call out on my birthday and anniversary next year as there is no way I will be able to get those 2 days off due to others above me in seniority… My coworker has all sorts of time off planned and she told the postmaster flat out she’s going on her vacations whether they’re approved or not so things are going to get hectic next year

Yes they are and I told the union president about this. My coworker and I were pretty mad about them. Now we have to wait another 4 years when the new contract is negotiated to try and undo these changes

I’ve been back to work for 3 weeks now, after being unceremoniously tossed out on my ear by my former employer, with one whole week’s severance. The entire second half of summer was canceled, along with some necessary expenditures for this new house, and now I’m trying to resuscitate my bank account in time for Christmas.

I was rehired by a former former employer, which has made some things easier, but they seem to think I haven’t forgotten anything after 8 years and 3 other gigs. Ha! They’re lucky I can remember some of their names. They refused to count the 4 years previously served toward seniority/time off, so I don’t feel too bad about being clueless. Sorry, I’m just a n00b.

During yesterday’s storm (the remnants of hurricane Ian), the postmaster wanted me to test the 4000w portable generator.
Rolled it out to the dock and noticed right away the little 12v battery was missing… it has a pull crank as a backup. Checked the gas and it smelled old. Tried to crank it and it of course wouldn’t start. On the way to inform the postmaster and found the missing generator battery mixed in the old scanner batteries that were to be sent out for recycling

Told the postmaster the generator won’t start because it has bad fuel and needs to be taken to a small engine repair shop.
Luckily we didn’t lose power but the postmaster’s short sightedness not preparing for this further in advance is just another feather in her brain dead cap😑

It’s early and my brain is still spinning up and I read this post and forgot what thread it was in and couldn’t understand why the postmaster was concerned about your generator or why you had a loading dock on your house. Ugh, I’m a dope. 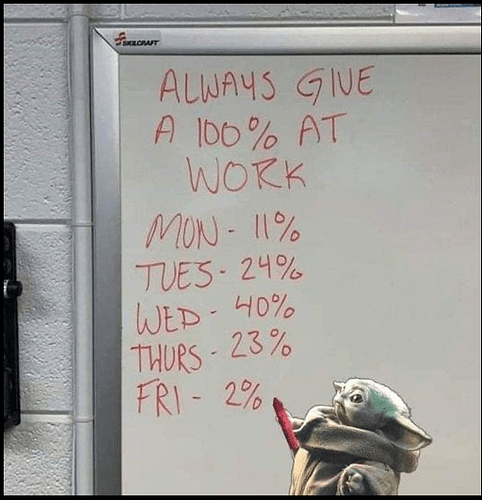 Which is great, and power to. But how am I supposed to “celebrate” that, exactly?

Get HR complaints filed against you by both men AND women?

Well, today I’ll get to finish training up this dude on exit yard marshall…yesterday he had a…not very good person “training” him, but on a very low volume day.

Today will separate the men from the boys, with much higher volume.

Meh, the trainee will be OK, but I doubt he’ll ever meticulously record times, and all late departures…thinks he knows everything.

Not by a damn sight! I’ll demonstrate how it’s supposed to go when we need to apply pressure without offending the drivers. Obviously, he’ll do whatever he wants, since he’s that kind of annoying person, but it won’t be from lack of having a good model during our busier waves.

I had to work on artwork for what was obviously a Neo-Nazi company. They had what looked like a swastika made of Fs and their text was using some very suspicious language about “seeing through the lies” or something to that effect. I really debated whether or not to do it, but our company ships everything blind, meaning we don’t get credited with their product. So it doesn’t reflect badly on the company and I don’t really know how to go about rejecting it anyway. It made me feel really awful, but I didn’t know what else to do.

Sounds like the old Romanian Fascio swastika. The F is for fascism. Gross. I couldn’t have done it, at least without sabotaging it somehow.