Scrambling on a short week with multiple team members out sick. ACK.

Got a new city carrier assistant (CCA) training on my route this week and he already seems overwhelmed… They’ve split up my route 7 ways and I’m getting my mail to help out little.
My old carrier who went to the other office across town is debating on coming back to my route as there’s apparently a lot more to deal with on his new route than he thought. The grass is not always greener on the other side… If he doesn’t bid back on my route, another carrier i know is probably going to bid on it so either way I’ll get a good carrier back on my route soon.

The grass is not always greener on the other side…

Maybe, but the other Sheltenack’s jupleberry shrub is always a more mauvey shade of pinky russet.

I got here at 7 am, finished all of my extant work by 7:30 and haven’t had a thing to do since. It’s almost 11 now. The most I’ve done since 7:30 is run down to Hardee’s for a sausage croissant breakfast sandwich.

Got 3/4 of the trailer loaded until I got to the longer pieces and i couldn’t get them onto the hydraulic dock lift. They were so long that the pallet jack would hang off the edge of the lift. I wasn’t about to load them by hand piece by piece so they will apparently be sending a second truck for the 7 or 8 remaining pallets sometime and they will have to go to the far end of our dock where we have a giant aluminum plate that we can use to load the rest up if it goes to plan so we’ll see…

Well, well, the worm has turned. The Learning Coördinator sent me a Chime today asking if I wanted to stay until 2030 this Sunday to onboard some Day Ones for a shift I don’t know much about.

No, I’m not going to demand tit for tat…not right away…but I own that fool!

I Loaded close to 3/4 of the trailer with pallets of product and I probably could have gotten the rest of it loaded if our dock was at the correct level as the semi trailer but hey, Progress was made today 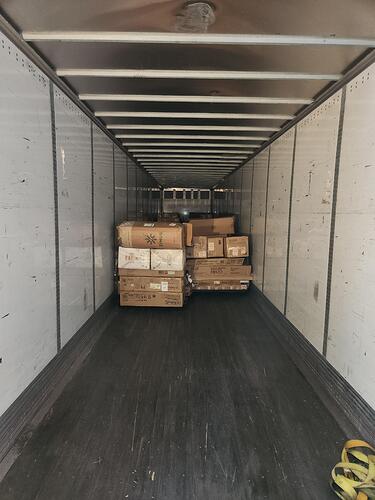 3000×4000 1.19 MB
Oh yeah and the driver didn’t even tie down the product before he closed the doors and left so the Amazon dock workers are gonna have a fit unloading them all fallen over and spread inside the trailer

But that’s not your problem.

Nope I just laughed and went about my day

Worked on restacking that long Amazon crap to be able to load it onto the next Amazon truck early this morning. Had to stack 7 plastic pallets to be able to clear the 18 inch metal dock plate Shown facing upright… 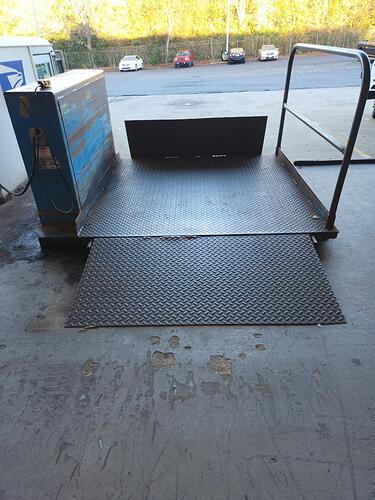 https://i.imgur.com/BtIlDLh.jpg(image larger than 4 MB)
About an hour after I finished restacking the pallets, another Amazon truck arrived :open mouth: had no idea they were showing up but I was glad to test out my pallet stacking plan and it worked out perfectly… 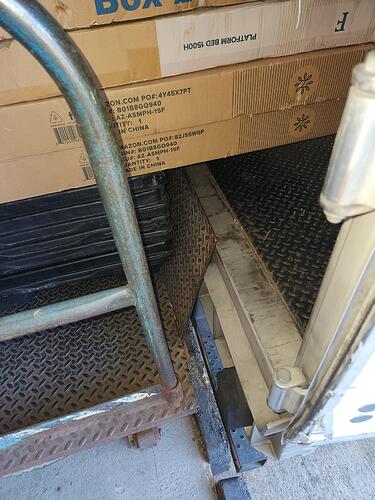 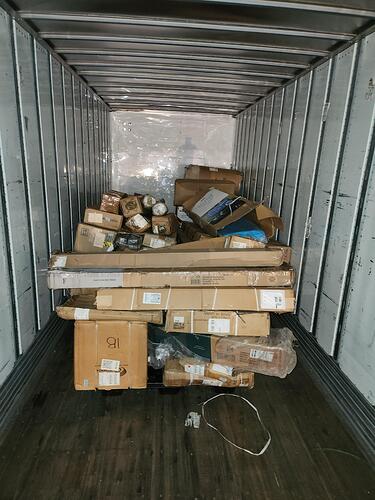 This has been going on for over a year and it’s finally all gone! I feel I actually accomplished a major feat but I know I won’t get any acknowledging from the postmaster

but I don’t care… If she just leaves me alone I’ll have a good day.

Well, I’m not displeased, because I wake up at 0300 on work mornings…but I kind of decided to do a favor to my learning coördinator and onboard some Day Ones for a later shift.

Unfortunately, my company (or maybe it’s even the state) doesn’t allow workers to work more than twelve (12) hours at a stretch. Which seems kind of wussy, but TBH, I was kind of glad to get going even though it meant a bit of scrambling to put away my equipment and jot down some quick notes for the Learning Coördinator so he’d know what was done and what wasn’t.

Kind of seems like something Mr Man should have been aware of, but he’s a little scattered here and there.

Still it was fun…I generally like onboarding, when I get command of the training room and find equipment that is functional. I daresay I’m pretty darn good at it…kind of like teaching, pretty much, which I’ve always enjoyed (teaching adults, that is!).

Im pretty sure it’s a Labor Law… you’re not supposed to work more than 12 hours in a single day. It’s the same at the USPS yet the carriers are still working well past 12 hours delivering the mail during the Christmas rush… Union files daily grievances, Labor fines the postal service, etc. It still happens every year

First day back after a long weekend, so it’s both a lazy day and completely chaotic. As in, I can hear my co-workers complaining about how much they have to do and then spending 20min talking about their weekends.

Currently standing in line at the bank getting change for the postal clerks and there’s 1 bank teller helping customers and one working the drive thru. Line is out the door and customers just carrying on conversations with the teller like we’re not important or needing help.
GET THE F OUT OF THE WAY SO WE CAN GET OUR TRANSACTIONS DONE!!!

As a teenager I worked for a gas station, did an evening shift 4 to Midnight, closed the site, but thanks to an error made earlier in the day, my til didn’t add up right.

I spent another hour til past 1AM (unpaid) figuring it out, went home, fell asleep immediately, slept thru my alarm set for 5AM as I was suppose to open at 6AM, and only opened at 7:30.

I was fired for not being there and missing 90 minutes of morning sales. I didn’t fight it as a) it was kind of a crap job and b) I actually felt guilty about “messing up”.

Of course we do have labor laws that are clear I should never have been scheduled to work both of those shifts as there should have been a minimum of 8 or 12 hours between shifts, but at the time I didn’t know any better, and by the time it was pointed out to me that I would have had a case, I already found a new job I liked 100% better, and I just felt it would be a hassle to bother with.

Regardless a developer bought the site and the station was gone a couple years after with the intent it would be part of a park for a tower complex. Surprise, surprise, surprise. At least one of the tanks had a crack and the soil was contaminated. The site has sat undeveloped for over 20 years at this point, enough time that those trees weren’t there when I left.

Forgot to mention I had to jump off 3 dead mail trucks this morning…
The junior carriers that deliver Amazon and UPS packages on Sundays don’t seem to know how to turn off their inside cargo lights whenever they’re finished delivering their packages so the battery is completely dead by Monday morning.
Classy frigging people

I started a new job about a month ago. It’s an interesting job. Some days are sort of boring, some days are kind of exciting. I like it much more than my previous job – a ton, actually. There’s still a lot I have to learn, and I like that, in a weird way. It also makes me nervous since I still have no idea what I am doing. The general census of my co-workers is that: nobody knows what they are doing, but they must be doing something right!

I have these thoughts where I start to realize that I am in a silly world, adhering to very silly rules, but as a new citizen of said world, I am learning how to navigate it.

So as of today, it looks like that clerk has headed back to India and won’t return until January…
Now she’s claiming her mom is sick. Not saying she’s making it up but it seems odd that she didn’t mention anything about this earlier

I guess we’ll see what happens to her discipline wise when she returns.