Where are you going to be (online) for Turkey Day?

Sorry if this was asked elsewhere.

I’m used to spending Turkey Day on Twitter, but this year with the Gizmoplex & the Discourse Hub, not sure where everyone is going to be hanging out online.

Tried typing this up earlier but Kitty decided it was treat time. Here she is looking guilty. 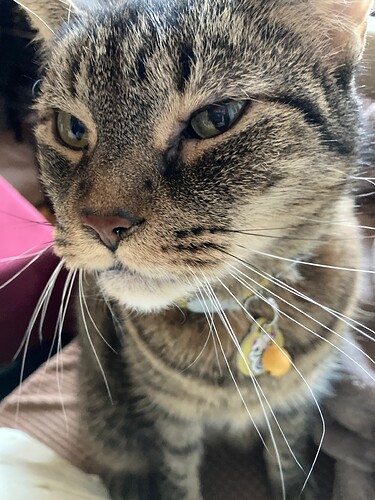 I’m with family in another state, but there’s at least one other Mistie in that part of the family, so hoping I can sneak in a little Turkey Day marathon, and likely to check in here at least a little…

I plan to be at the Gizmoplex on and off. My little family is at home on Turkey Day so I’ll be busy, but sneaking in occasionally.

MST3K Turkey Day has thankfully become a family tradition here… so, will have the stream up on the Gizmoplex app on the tv all day.

I’ll be here except for Starfighters, during which I will be napping.

I’ll be right here in the forums whilst riding my couch and stuffing birds into my face!

I’ll be spending most of the first half of the marathon having Turkey Day will the family, but I’ll definitely be looking in every so often.

Should be back here for the latter stages! Going to be so much fun!

We will have the Kingadome loaded and rolling all day! During cooking times and basting, my kitchen Visio has an MST3K channel, that I’m hoping will be vaguely in step with the Gizmoplex so I don’t miss anything, whilst making sure that bird is MOIST!

Since I work for Big Warehouse, I’ll have to miss the first half, but it’s good we’ll get it in smaller pieces over the weekend. The most shocking part of the show will Mitchell in HD, sadly including the “sex” scene

If they’re still streaming the Turkey Day marathon on Pluto TV, I’ll be there.

I’m driving from IL to GA overnight on Wednesday, it’s a big family gathering this year, so I don’t have a ton of free time. I will definitely be popping in here to see what’s what with the livestream. So hopefully any big announcements will be covered dutifully by all you dedicated MSTies!

Maybe I can pop into the livestream for a bit after we eat… one could hope.

Parents in for the weekend for the first time in 3 years, plus a turkey trot race in the morning, then cooking a huge meal, then getting the tree and other holiday decor up, so I’ll be sparse. I am hoping to get everyone to settle down for the Santo or Beyond Atlantis showings in the afternoon/evening.

And I’ll be popping in here whenever I can to make sure no one’s spiked the punch!

The punch is safe, the rum cake is going to be highly flammable however?

the rum cake is going to be highly flammable however?

Then we’re gonna have to ban the sparklers and fireworks, then. Ah well. Next year!

I’ll be at the Gizmoplex.

And I’ll already be up and about at 4 so I’ll catch Sword and the Dragon, and maybe some of Starfighters. What I do miss I’ll catch up on during the weekend, as I’m interested in checking out the surgical enhancements.

I thought we all agreed to keep the fireworks OUTSIDE …

I’m probably gonna do my own little marathon of MST3K episodes or do the Turkey Day edition of Night Of The Blood Beast. The lineup for this year’s Turkey Day doesn’t really grab me sadly.

Ended up watching Turkey Day on both the Gizmoplex app (flung to Chromecast) and Youtube for Android, when I was away from the TV.

The feeds were fairly similar, as I have Youtube Premium and didn’t receive the ad breaks that weren’t already part of the show.

Tried to make sure that my Chromecast TV ran the marathon the whole way through, but had to reboot once due to the auto sleep/power saver
kicking in after around five hours.

Still caught a ton of the show(s), and had a lot of fun. There were a few episodes I either hadn’t watched, or hadn’t seen all the way through, and they were all pretty awesome.