"Why don't you make me up a sign saying See the Amazing Colossal Man?" MST3K title drops

Doc Brown: “Next Saturday night, we’re sending you BACK TO THE FUTURE!”

I’ll admit it, I’m a sucker for a good title drop in a movie. Yeah, the overall effect is often silly, but I enjoy that. (see the above video for some examples)

So, for the purposes of this topic, I have two possible lines of discussions.

Since my coffee hasn’t kicked in yet, I’ll take the low-hanging fruit:

The best (meaning cheesiest but in the most awesome way) example of #1 can only be this:

So Freddy vs Jason is one of my favorite bad movies (it’s one of my favorite movie-going experiences; there was a riot at the theater when the movie sold out), but by taking out this one line (the second part of it was kept in trailers), it kept it from going just a bit too far. Even in movies like these, a sense of decorum is called for. FREDDY can break the fourth wall, but not the teen victims.

In one of Penn & Teller’s books, they talk about some of their traditions when they go to see movies. One of them is if the movie’s title is said in the movie, you clap.

OK, but what if the movie’s title is something like “Eegah”…

There’s a lot of clapping.

Eh, the “Eegah” drinking game isn’t that bad. The sulfur water you use for it lets you have a long life as long as you don’t fall into a swimming pool.

Even the music says the title!

Which is still better than any of the lyrics from the Arch Hall Jr. songs.

Whose are worse though, his or Chase’s from “Giant Gila Monster”?

Same. Not gonna lie, I actually liked that actor and loved seeing him in The Rebel Set. Kinda wish he’d been in more. 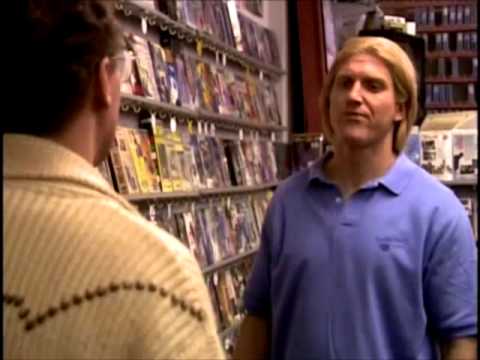 Same. Not gonna lie, I actually liked that actor and loved seeing him in The Rebel Set. Kinda wish he’d been in more.

Right? He actually brought a sense of earnestness and conviction to some profoundly goofy films.

Although I will say that I like the gang’s intro to his character in The Rebel Set:

By the way- Don’t play the Mighty Jack drinking game either.

Although I will say that I like the gang’s intro to his character in The Rebel Set :

Agreed. Honestly didn’t recognize him either until he did that.

Which is funny considering they had issues recognizing Gene Roth as the conductor and kept mistaking him as Merritt Stone, both of whom were in Earth vs. The Spider (albeit Stone was only in the very beginning). The final host segment was totally worth it!