It was an editing oversight. Bloodlust will be updated with a gizmoblip asap.

Speaking of Bloodlust, anybody else catch that Dr F broke the set at the end? After he throws the apple, this comes flying up… 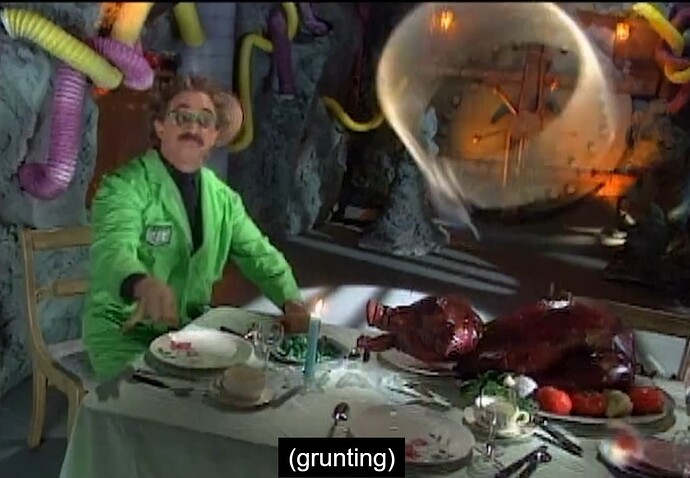 I started off November with the one I’m least interested in, Rocket Attack USA. I’m not a fan of propaganda films, so I’ve never had any interest in watching this one until now.

But now we’ve got Pearl! I’m loving how much Mary Jo is in this season. Pearl’s grown a lot on me over time, and Mary Jo’s a real treasure. I’m also digging her… lair? Room? Whatever. It’s a lot fun seeing her mimic Synthia’s segments, and she’s also clearly still got her Pearlness, as seen in denying Emily’s requests. Sounds like the bots are giving her the same shenanigans as their duplicates would. And what’s going on on the SoL? Does Jonah always plan road trips when he’s had too much coffee?

Does anyone else notice that Bloodlust is missing the skit that usually appears with every vault pick episode?

Oh thank god. I was just going back and forth trying to find the damn thing because I thought I missed it.

I couldn’t find one for Bloodlust

Great news, folks, the Bloodlust Gizmoblip has now been added in!

Is There No New Added Host Segment in November's Bloodlust? Gizmoplex Vault Picks

Bloodlust has been updated with the missing Gizmoblip.

Sweet! Thanks to the folks who fixed it so quickly. Truly doin’ St Larry Csonka’s work!

The only live tour I went to was Watch Out For Snakes, so I never got to see the new crew doing their thing live. But I did see them doing promos on Pluto.tv, and my god, that was exactly enough time for me to fall in love with Mega Synthia Forrester.
She’s been kind of a background character so far this season, so it’s a real treat to see her bringing her full Mad energy to Mega Synthia’s Selects this month.

I love how Pearl’s just not giving a care. Feels like a send up of the whole idea.
Mega is …trying her best, but uh, the cloning process must have been rough.

A post was split to a new topic: Bloodlust Closed Captions Missing

Village of the Giants is a sleeper choice. Not only do we have familiar faces, and a redhead who’d be big on MTV 17 years later, we have the famous “Dr. F fires Frank” arc. Good thing Kinga can’t do that, because she needs someone to throw at the Synthias if they try to seize power (but they’ll seize each other instead).

So many problems with Bloodlust, so little time.

Well, there was something about Blood in the title!

Have you checked to make sure it’s the real Ivan???

Hmm, you make an excellent point! Will get someone on that right away!

Wow, MegaSynthia’s intro/outro on Monster A Go-Go…she definitely inherited Clayton’s hair…and what in the heck is in that coffee mug…

Her end credits were very relatable. Basically me trying to figure out my new microwave.