If they ever wanted to do another Riff-a-Long, I think this would be a pretty good choice!

Seconded! This is ripe for rediscovery to those who haven’t watched it for awhile or ever. 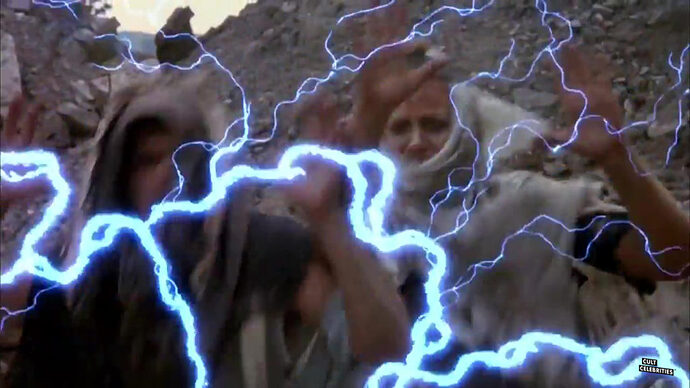 Robot Holocaust is, I think, tied with Robot Monster as the best first season episode.

This one took awhile for me to acclimate to, but it happened eventually. To this day, I’m sometimes forced to mute Valeria and turn on closed captions so I don’t climb the walls having to listen to her.

This was the movie that got me back into MST3K. I saw it twice with friends without riffs on Comcast’s on demand and I said “god, this feels like MST3K should be doing this.” A random YouTube search later and here I am.

You know, I have not rewatched this one in ages. And the thing that struck me at first was how I now recognized the actress playing the man-hating amazon lady. Turns it she was played by Jennifer Delora who has an extensive career in small roles. So I must have gotten used to seeing her out of the corner of my eye.

But I got to say, while the line delivery across the board in this one is just horrific, the robot makeup was actually quite excellent. But just not for the robot we see the most of. Freebot there is clearly someone with a painted bucket on their head.

But the main hench-bot and especially Valareia’s makeup was really good. Her face plate was really well blended with the rest of her face. And the big guy was suitably creepy and actually moved a little like a mechanical thing. Let’s hear it for Italian design. If avocado men are your bag.

I agree about the makeup/designs! Much better than it had a right to be. I thought the Freebot’s costume was actually quite good, all things considered. It reminded me strongly of the robots in Ice Pirates.

This is Season 1. The experience of MST is still forming. Effortless riffing? It isn’t quite there. Were this Season 3 we’d be looking at Cave Dwellers (1984) or Pod People (1983). All the cheesiness and potential exists for this to match them and it just doesn’t. It’s not you. The show’s an early 301 or 303 minus the special magic of those episodes. I like it. But it’s less. 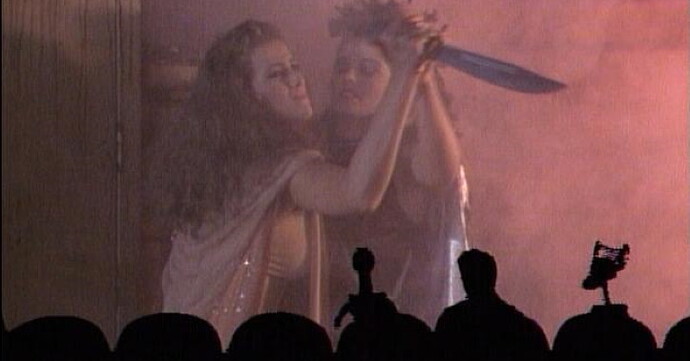 It feels like a running gag that’s just not working. You’re probably right in that it’s just the riffers being untrained.

It feels like a running gag that’s just not working. You’re probably right in that it’s just the riffers being untrained.

That’s my sense. They haven’t worked it out yet. No TVs Frank, No Maroon Jumpsuit, No Kevin Murphy. It’s a work in progress. The first color experiment of the cable years. Fairly obvious jokes. We’re in early times and they haven’t quite perfected the formula. 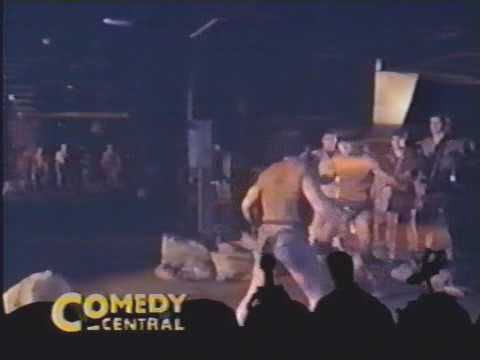 I never was clear on why a soulless killing mecha-machine-god would’ve turned his foe into a plant. Something in the script wasn’t well thought out there.

Also, I think it’s funny how much Science Hero Dad has in common with Science Hero Dad from Cave Dwellers. They both just seem either pompous or terminally disengaged most of the time. Not at all sympathetic characters. They even look really similar.

None of these movies ever seem to have Science-y Moms. for some reason.

The first color experiment of the cable years.

Women Of The Prehistoric Planet was 6 episodes earlier and in color.

The first color experiment of the cable years.

Women Of The Prehistoric Planet was 6 episodes earlier and in color.

Not exactly. It is listed Episode 104 but is actually the last episode of Season 1 and in order of the show comes after Robot Holocaust (1987). 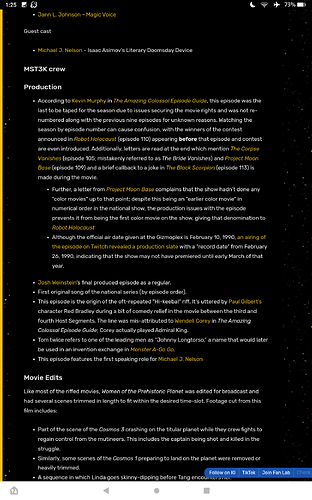 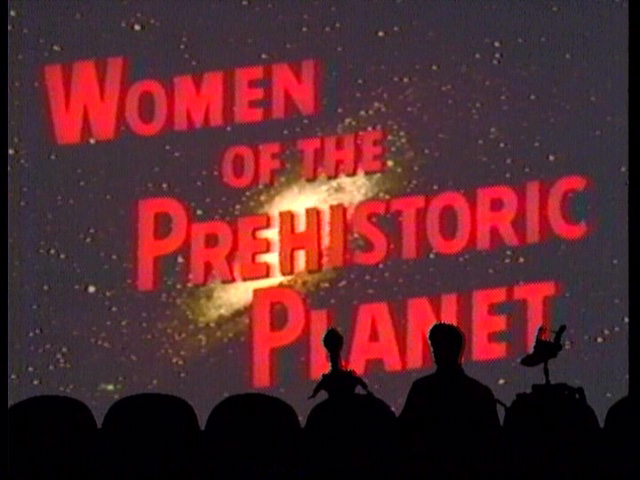 MST3K 104 - Women of the Prehistoric Planet

Main article: Women of the Prehistoric Planet (film) Colonizing spaceships crash land on primitive planet and face peril. First film featured on the show (post-KTMA) to be in color, going by production code number. Prologue: Joel has found a couch in...

None of these movies ever seem to have Science-y Moms. for some reason.

Because Science Moms wouldn’t put up with any of this crap and would have the problem solved in the first ten minutes.

I don’t know. With her thick German-ish accent, Valeria’s diction isn’t that great.

Robot Holocaust is one of my favorites from Season 1. Post-apocalyptic films from the '80s are pretty much the perfect MST3K genre for me, and this one is just going all in on the cheese. You can tell there was a lot of heart in the making of the film, but they just lacked budget… and talent. Until it was made available on the Gizmoplex, I did not have this one in my collection, so like a lot of season 1, I have not seen it as much as later episodes. This actually helps make the episode seem a bit more fresh for me. I essentially rediscovered the episode in 2022.

The host segments are not the best, as is often the case with season 1. Despite really liking Josh as Servo, and especially in the theater, his portrayal of Larry was always a bit grating for me. They also don’t seem to have been putting as much effort in to the host segments at this point in the series. It is to be expected, they were still feeling out their approach to riffing the movies, so we can give them a bit of a break on the host segments. The riffing on this one is really good, and resulted in a good amount of later callbacks. It shows that their focus on getting the riffs right was paying off.

I’m really glad that they put this one up on the Gizmoplex, and that it got the spotlight in vault picks this month. I watched it a time or two in December, so have not watched the vault pick with the new bumpers yet, but need to make sure I do that before the end of the month.

One of the things I find so amusing about this movie is how it supposed to take place in a Post-Apocalyptic Future, yet there’s little effort to hide the fact it was made in a modern, fully functioning New York City/Central Park!

I wonder how many takes were spoiled by joggers, tourists and confused policemen? 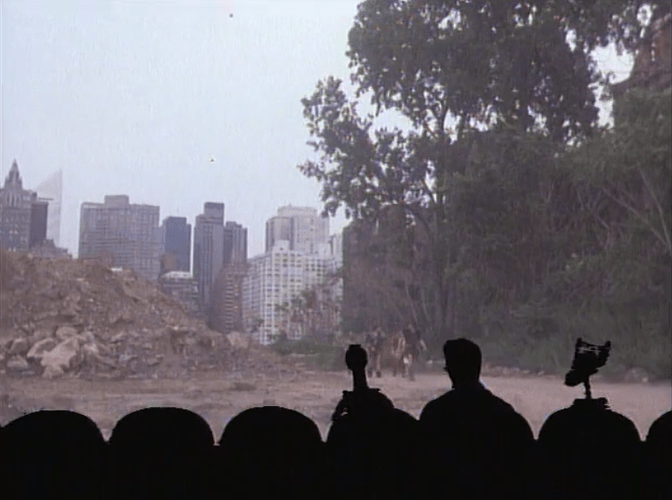 Not too many. The crumbling buildings in the foreground and view of the UN and Chrysler Building in the background tell me that they were shooting on Roosevelt Island. Not too many people there most days, and not too hard to get a permit to have the park on the southern half of the island closed off for a while.

You may recall it from the climactic battle at the end of the 2001 Tobey Maguire Spider-Man movie, where the Green Goblin attacks the tram cables and Spider-Man has to save it while some hokey NYC stereotypes throw garbage at the Goblin from the bridge. Spider-Man and the Goblin end up crashing on Roosevelt Island, where they fight in the ruins of a crumbling brick building.

The northern half of the island has a few apartment buildings, a couple of restaurants and shops, a hospital, and a few small parks with great views of the city.

But if you go south from the bridge, past the small university campus, there’s a park about half a mile long with some huge crumbling ruins. Originally, it was an insane asylum, but it was converted to house and quarantine smallpox patients. The ruins of the hospital and its outbuildings are now designated as historic landmarks.

The southern tip of the island is right across from the UN, and the Chrysler Building is just a few blocks inland from there.

The same park appears in Escape From The Bronx. There’s a scene where the CEO of the evil corporation comes in on a helicopter to give a press conference about redeveloping the Bronx. He’s in front of a ruined building he plans to demolish so he can start building his skyscraper complex. But the plucky rebels kidnap him. It’s a little jumbled because some of that was filmed in Italy. But the helicopter flying in (supposedly looking at the Bronx with Manhattan to the south) clearly shows it’s Roosevelt Island (which is to the east of a completely different part of Manhattan), and the press conference was filmed in the park there.

I think the idea in this frame from Robot Holocaust is that NYC has been abandoned because the robots killed everyone and captured the few surviving stragglers, and you can clearly see that our heroes are walking past a ruined building and a pile of rocks and dirt, so you can understand that places really were devastated. (There are no ruined buildings or dirt mounds in Central Park.) The shot is also framed such that they’re walking away from the city that was, the empty and forgotten past, even as they walk through the ruins of the present. I actually think it’s one of the best shots of the movie.

When I made my post I was actually in the middle of watching Women…, at least this info make the final host segment make more sense.

From what I heard, Women of the Prehistoric Planet was indeed supposed to be episode 4, but there was a rights snafu somewhere in there.

From what I heard, Women of the Prehistoric Planet was indeed supposed to be episode 4, but there was a rights snafu somewhere in there.

That’s right. It remained Episode 104 in the listing while it was shot last of the Season 1 episodes and even talks about shows with later numbers.