This might be the best Bert I Gordon movie. It’s easy to get caught up in the revengeful plot. The acting is pretty decent here, and there’s an air of competence that surrounds the movie. It may be a little TOO good for Mst. As an episode, the riffing has it’s moments but it’s not nearly as funny as some of BIG’s other efforts. This movie is rather dark, and I think that drags down J&TB’S riffing of it.

It’s quite the departure, for sure. What gets me is how hard Joel and The Bots lean into the movie’s darkness and respond with super dark riffing in return. Fascinating experiment.

Overall, I do like this episode a lot. Shows you they really can mine humor out of just about anything!

Also: Really love that they end this with the Happy Thoughts song. It’s a much needed tension easier.

I think Bert’s daughter rates as best child actor in any MST3K movie. I think she was truly a good actor at her young age. She gives a very believable and sympathetic performance.

She’s rock solid. Credibility speaking. A rarity in MST. You actually believe her and not feel above the performance. 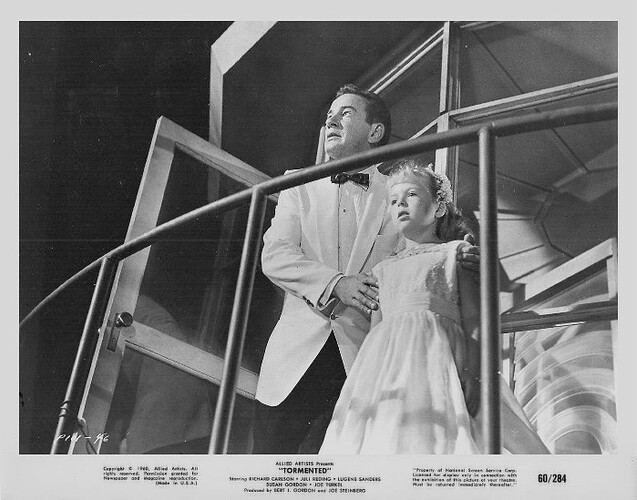 Here’s a question for everyone. Are their comparisons between this and The Mask (1961)? Same time period, black and white, thriller structure, more strange than bad? I can’t help sensing these flicks are from the same cloth. Double Feature? 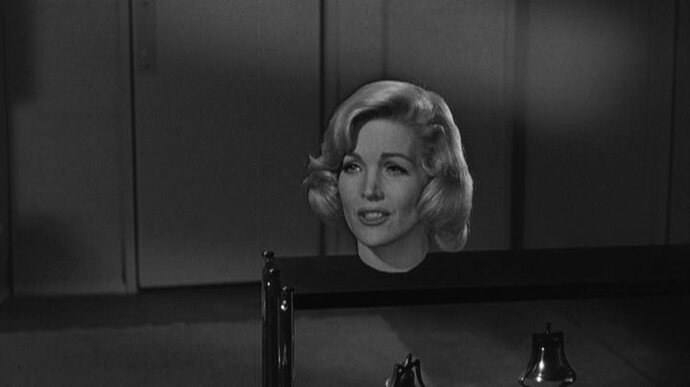 The acting is pretty decent here, and there’s an air of competence that surrounds the movie. It may be a little TOO good for Mst.

Could you say the same of The Mask (1961)? Or were the horror and Halloween elements enough to offset the competence? Tormented (1960) is serious, disturbing, and trippy at times and it’s the mood and implausibility that make it riff-worthy not any mistakes or oversights. The Mask is the same. The two showcase the range of what’s possible on MST. 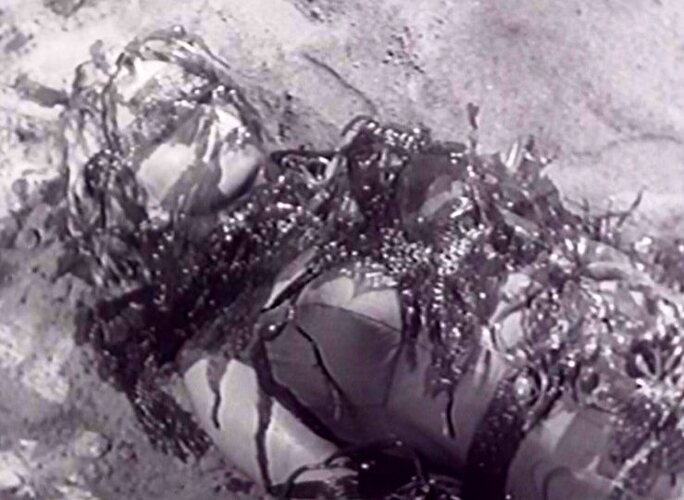 Tormented is definitely a watchable movie, and I think it is also a pretty good episode. Tom Stewart is a two timing creep, and he gets his comeuppance in the end, but as noted, the movie never gets all that dark. There are a few memorable riffs for me, referencing the Dead Milkmen, Springsteen, and Jerry Lee Lewis.

The host segments are hit and miss for me. The invention exchange doesn’t do much for me, but some of the later segments are pretty good. I like the Happy Thoughts song, but it is not one of my favorite musical segments.

Here’s a question for everyone. Are their comparisons between this and The Mask (1961)? Same time period, black and white, thriller structure, more strange than bad? I can’t help sensing these flicks are from the same cloth. Double Feature?

There are definitely comparisons to be drawn. Both movies are actually watchable on their own, and have a similar psychological thriller at their core. The Mask goes in more for the supernatural horror though, where Tormented makes it clear that Tom Stewart has created his own horror. I would be up for a double bill, just put Tormented on first, and save the more trippy horror movie for the late feature.

“This is one dark mama-jama of a movie, you guys”

The defining riff of the episode for me. Joel’s tone of voice is just perfect.

I haven’t seen the Mask but it seems Mst3K worthy!

I love how after the Mindless Summer stream, while the credits were rolling, you can just hear in everyone’s voice how much of a bummer the movie was.

I haven’t seen the Mask but it seems Mst3K worthy!

Like Tormented (1960), it’s “worthy” related to its oddity and strength of conviction versus any outward badness that’s openly seen. I’d argue The Mask (1961) is the best film of Season 13 quality-wise and I’d say the same for Tormented and Season 4. The two belong based on what they insist on not what they fail to achieve. The over-the-top melodrama, the seriousness of approach, the actual feeling felt in both, these are tangible and lend the movies an atmosphere that invites them on for style over incompetence.

Movies land on MST for a host of reasons. Badness, incomprehension, availability, price, uniqueness, and an x factor unique to the picture. I maintain Tormented and The Mask were effective in unusual kinds of entertainment and this impression helped them get on the show. Their madness is real and their acting steps away from the confines of what typically graced experiments. Tom Stewart and Dr. Barnes are actual people in impossible situations and their plight has pull unlike many plots on MST. That’s a credit to the actors and the dedication to tell the story. Caring about the details is a sign of involvement not ordinarily experienced on MST.

Another that’s firmly in my permanent top ten.

Another that’s firmly in my permanent top ten.

I’m fond of it. One of those episodes I discovered early on. It burned in there. The skewering of such an intense flick and in black and white stood out. @optiMSTie Is this a significant show or more of an interesting footnote?

The Beatnik Boat Guy is just about the perfect kind of riff target just based on his slang alone!

It’s nice to see Bert I. break out of his giant animal movies which are largely dull to me. This is actually a fun movie. Oh, very easy to mock but at the same time, like Kitten with a Whip, easy to get invested even if everyone is dumb.

“TUMBLER OF SCOTCH AND A MENU.”