England fans have been unhappy with Southgate for a while. Sections of the England support can be brutal though. I recall David Beckham (IIRC there was obscene chants about Victoria Beckham) and Wayne Rooney having fallings out with them and right now Harry Maguire is their hate figure.

He does have a habit of playing two holding midfielders when that England team really should have one and be attacking more and pressuring the opposition. That said, I wasn’t complaining when he played that system against Scotland in the Euros last year and we got a draw lol. They almost looked scared of losing that game though and that’s the problem. While he does seem to have a good sense of unity and togetherness within the squad, there doesn’t seem to be a real winning belief there.

Favourable circumstances or not though, he did get them to the final of the Euros so I do still think he deserves to lead them to the World Cup. I suspect he’ll move on afterwards though unless he gets to the final at least. Personally I think Argentina will win it this year.

I was out with my beloved Louisville City FC at home last night, and I spent my beer money on a stuffed sloth wearing a LouCity shirt. I have quite a few stuffies from my team, all with player names, so I spent some time before the match choosing a name. I finally settled on Matiti, after our forward Enoch “Matiti” Mushagalusa.

Aaaaaand then Matiti (the player) scored a hat trick on the way to a 6-0 win. Matiti the Sloth is now a minor Twitter celebrity and he’s required to come to every game now.

What a great night! 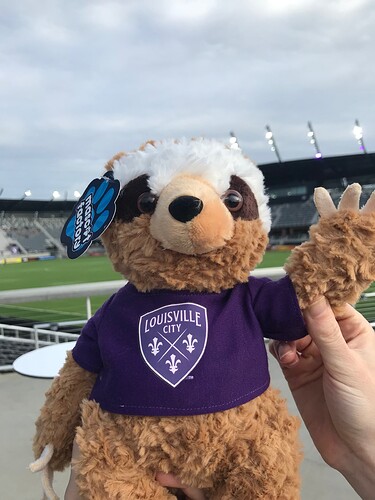 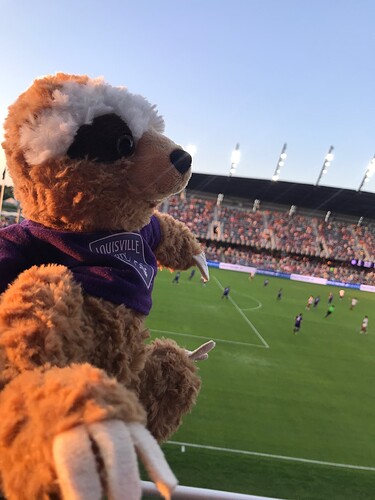 These are the two squads I know best and am rooting for…and OF COURSE they are in the same group!

No real surprises on the US squad…Captain America (Pulisic), Steffen, McKennie (hope he keeps himself on track)…do I think they’re going to win the group? Probably not. 60/40 to advance…they’ll need some luck though.

On England…JAMES FREAKING MADDISON LET’S GOOOOO!! I love Madders and he is on form. Sad Ivan Toney didn’t get a go…but on the whole, it’s solid team. A few janky picks, but you get those on any squad, really. Sterling is a bit questionable and who knows what Grealish is gonna do. TAA needs to be on point. Gallagher is a surprise. And OF COURSE people are already complaining about Marcus Rashford, but he’s been coming around to form lately, so I’m good with that. Callum Wilson’s a good choice.

US v England on Black Friday, November 25th. Should be a banger!

(And PS, look out for Belgium as a sleeper pick to win the whole thing! Oh, and I’m already sick of Brazil.

Going with Argentina myself to win the tournament with Denmark as my dark horse.

England have a terrific squad of talented young players but it remains to be seen if Southgate can get the best out of them. Their Nations League campaign was poor but I’m not sure how much to read into that. It’s not a competition many care about. IF England win their group then they won’t have to play Argentina or Brazil until the final assuming those two win their groups as well. It’s a toss up for second but I’m backing Wales though. Gareth Bale is often top class for his country so keeping him quiet will be important if the USA want to qualify. Iran shouldn’t be discounted either even if they’re the least fancied team in the group as Qatar is very close to home for them. There’s bound to be a big shock or two and it could be the Iranians providing one.

Group H is the most interesting for me and I could see South Korea upsetting Uruguay and/or Portugal.

Hope any fans that travel out there stay safe anyway.

First full day of WC action; I don’t know how much I’ll be able to see. All English-language action is exclusive to FOX Sports, and you cannot watch that station online without an additional cable subscription, which I do not have. Trying to game the system by clearing cookies and getting preview passes, but I don’t know how long that’ll work. Worse comes to worse, I do have all the Spanish language coverage on Peacock.

Brazil is a favorite, but they always talk a good game, then flame out. Argentina is a contender if Messi has a good tournament. France just lost Benzema, which is a huge loss. Germany and Spain are question marks. Belgium is a dark horse. Denmark looks good. Senegal could make noise. Ecuador has a strong squad. I keep forgetting about Portugal for some reason. I’ve never liked the Netherlands much.

And England just dismantled Iran 6-2, so their name has to be in the conversation.

As for the USA? I never know. We’ve got talent, but talent doesn’t mean squat if you can’t work together. And so much hinges on Pulisic and McKennie. They play Wales later today, so we’ll see.

I am not going to pick a winner until we get to the knockout stages, but of course I support the USA. And England. And Germany. And Uruguay 'cause why not?

We’re lucky in the UK as all games are on either BBC or ITV which are freeview channels. I don’t know if this would work but maybe you could watch through the BBC iPlayer and ITV Hub apps. You might need a VPN and would have to input a UK postcode for setup and if asked about a TV license just say yes. BBC has no adverts while ITV does (not during actual matchplay though).

I don’t have a VPN, unfortunately, but currently I’ve managed to find a workaround using various browsers in private mode and FOX’s 60min “preview pass.”

If FOX offered a separate “pass” just for WC games, I would happily pay for it, but there isn’t, so I have to be sneaky.

I don’t have cable but I can watch fox. I have one of those indoor antennas I bought from Walmart a while back. I get like 20 local channels for free.

Yep, I can watch whatever games they have on broadcast FOX over my antenna, but the games are on during the day when I’m at work, so if I’m going to see those games (and anything on FS1) I have to be on a computer.

I just can’t believe they don’t have some separate subscription they can sell for just the games. Why don’t they want my money??

You can also watch every game replayed on Tubi…it’s not live, but I haven’t watched the Iran v. England game yet, and I’ll be watching that later.

Tubi also has a large selection of MST and Rifftrax, which never hurts.

I’ll spoiler this as some might be watching the game on replay.

USA were more composed in possession and pressured effectively when not during the first half. Wales looked flat, gave the ball away cheaply and just not offered any real threat. I don’t think the USA were great but they haven’t had to be and controlled the game well. Wales really needed to step up the tempo and be more positive going forward in the second half.

And they did, big time. USA looked uncertain whether to go for a second goal and kill off the game or defend the lead and try not to lose it. Wales’ pressure paid off and they got a penalty for an incredibly stupid and unnecessary challenge. That was a cynical tackle but a “good” yellow for Acosta at the end as had Bale got that shot off, he would have scored if it was on target as the keeper was in no man’s land.

Makes for a very interesting group now though. If both Wales and USA beat Iran and lose to England then because they drew they’ll be level on points and qualification will come down to:

Breaks down to a match of two halves. And you can tell the USA was GASSED by about the 70th minute, leading to some dumb mistakes.

Friday’s match against England’s going to be interesting; if England fires on all cylinders like they did against Iran, it’s going to be a long day for the US!

I think both teams will be happy they didn’t lose that game. USA will probably be glad to be playing Iran last as knowing what they’ll need to achieve to qualify should be easier against Iran than England.

Wow, I don’t think anyone saw that coming. Argentina got an early lead and just switched off. Okay they had 3 goals disallowed and a good save from a Messi header in the first half but they were in second gear throughout. It really felt like they thought the game was won already but Saudi Arabia proved that you can never write anyone off. They were fantastic and defended bravely for one of the most remarkable results I’ve ever seen at a World Cup. I do remember Italia 90 but I was too young to appreciate the weight of Cameroon’s win over Argentina there. Of course they still made the final there and Argentina still can here and I think they’ll still beat Mexico and Poland to qualify. They surely can’t play that badly again.

Seeing Timothy Weah score brought back memories of watching his dad George play for Milan in the 90s. Channel 4 here used to show Italian football and I caught this one live.

I didn’t think that Messi goal was offsides, just watched Mexico v. Poland, and the Mexican goalie made a great save to keep it zero zero.

Heartbreaker for Wales. Iran were much improved over their performance against England and while it was fairly even in the first half, they were unquestionably the better team in the second and deserved the win. Wales had their keeper sent off after a moment of madness saw him rush out of his area and clatter an Iranian player. The ref shouldn’t have needed VAR as that was a red all day long. A long range strike gave Iran the lead in injury time and when chasing an equaliser Wales conceded a second.

That could be a good result for the USA as regardless of today’s result against England they’ll qualify if they beat Iran unless Wales beat England. Iran looked a good attacking outfit though and will cause the USA problems and after that performance may even be favourites now.

Everyone was talking about USA v England, I am actually more excited to see USA v Iran; both rivals…one much more recently than the other, though.

I expect a shellacking from England, hopefully we can make it a game or even show up and win.

The USA definitely have a chance but they might have to take the game to England. If they sit back and let England settle it could be a long night.

I have been getting run off my feet with family stuff today, but we did see the end of the Wales / Iran game.

And now we’re settling in for the USA / England match. I put my foot down, LOL!

I didn’t catch it all but Team America were the better team in the first half that I saw. They just seem like they want it more.