You can stop right there. MAGG just lacks … everything.

You can’t be serious! The majestic space-faring, the rockin’ dance party, the stirring voice-over, the oh-so-progressive car-out-of-gas-scene which CLEARLY inspired whoever directed that “Big Log” video in the 1980s! Tsk! Some people are impossible to please, I guess.

Manos can at least be salvaged somewhat in the editing room.

But its tone and emphasis can not. The extent of suffering might diminish edited down while Manos (1966) is still Manos in its characterization, direction, and mood. Same with Eegah (1962). The liberties and choices decided on and not recognized then as terrible give them a personality of chaos and indigestion to sit through which is the reason they’re on the list. There’s an x factor those films possess. There are numerous ways to be terrible. Not every route is the same or as devastating to everyone. To me, Manos and Eegah repel and attract equally while Monster a Go-Go (1965) simply repels. What’s worse? Hating something or being fascinated by your pain? That’s the question. 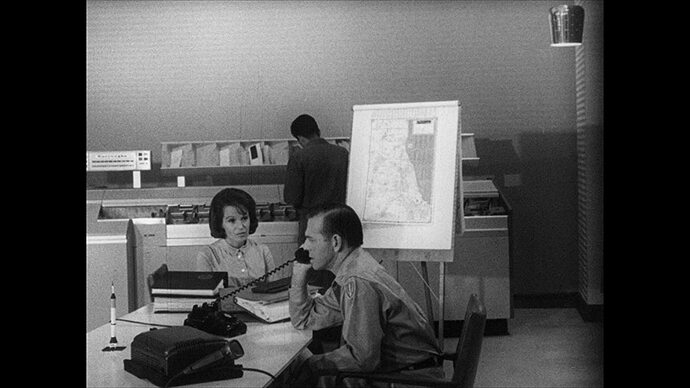 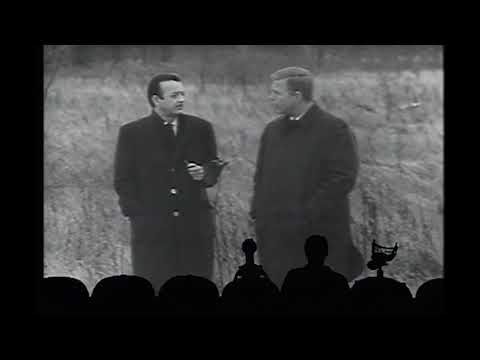 I’m just impressed that the Mads were such great amazingly evil geniuses that they managed to invent video game DLC at a time when most games couldn’t fill a single 100mb CD-ROM.

Circus on Ice is brilliant.

Monster a Go Go has great riffing but the movie pain is so high that I find the actual film almost as hard to cope with as BB did.

My fav riff from the short, the song Tom composed about the pink ice dancers-

These two girls they make quite a pair
They both come from your worst nightmare
They will haunt your soul forever
And now, when you see pink, you’re gonna think, ‘We’re doomed’
They are agents of Satan…

The movie is dull and plodding, mostly consisting of static scenes of people standing in bare rooms having slow meandering conversations, or walking through empty fields while the director delivers dry narration. Some really excellent riffing. But yeah. I have to pause and take the movie in chunks.

Circus On Ice is fantastic. It’s such bizarre idea for an amateur show, filmed and narrated with enthusiasm by Warner Brothers. The riffing is solid, with some real standouts.

My one complaint with the short is that I do get a little tired of them using the same joke (which they also use repeatedly in a couple of other shorts). The narrator says something like “A high degree of skill and showmanship…” and they riff “… is not to be found here.” There’s only so much you can do with that kind of narration, I guess, and they do try to vary the phrasing of the riff a little even if the meaning is the same, but it’s a little overdone.

But… hmm. Final Sacrifice is a Canadian film. Circus On Ice is a Canadian short. Coincidence? Or is there some pattern to this? Like, perhaps, it’s Things Are Not What They Seem month, and Canadian Thanksgiving was in October? Time will tell. Or whenever I get around to watching the other 4 Vault Picks this month. I don’t remember what they are off the top of my head.

Then splatter shlockmeister Herschell Gordon Lewis bought it and shot the half-baked ending so he could pair it with Moonshine Mountain on a double bill.

And the weird thing is, Moonshine Mountain is almost as incoherent as viewing experience as this.

My one complaint with the short is that I do get a little tired of them using the same joke (which they also use repeatedly in a couple of other shorts). The narrator says something like “A high degree of skill and showmanship…” and they riff “… is not to be found here.” There’s only so much you can do with that kind of narration, I guess, and they do try to vary the phrasing of the riff a little even if the meaning is the same, but it’s a little overdone.

They did that a lot in “Progress Island, USA,” so much so that I got kinda irritated the first time I watched it. Thank goodness I watched it a few more times, since the other riffing in that short is terrific.

Crow’s “Hum de dee he he…HUA HUA” song is hand’s down the best non-song song in the series.

This is one of those films that makes me want to throw things.

Like the BS about how no one knew where the Monster was, but Dr Logan did know, because HE’D BEEM KEEPING IT IN SECRET IN THE LAB FOR WEEKS ADMINISTERING AN ANTIDOTE AND THEN HE DIDN’T DO IT IN TIME AND THE MONSTER GOT OUT!?

Also I hate all his excuses:
“Blame it on my state of shock.”
“I could only think to record what I had seen!”

And then when the one guy tells him how stupid he is: “What do you want from me, Doctor? I don’t have a precision mind like you!”

They were kind of backed into a corner. They had half of a movie that they needed to finish. Most of the original cast was unavailable, and the guy who played the doctor had aged so much that they had to write into the script that this was the older brother and the younger brother had died offscreen. The guy who played the monster wasn’t even an actor. He was just a really tall guy who had been hired to put on a costume and fright makeup and lumber around wordlessly in front of the camera. He never did another movie. They didn’t have the monster costume, either.

So you’re left needing to fill screen time on a monster movie, but you have limited footage of the monster and you can’t have the current cast interact with the monster on screen. The best they could think to do?

“We’ve been out everywhere looking for the monster. Putting out sensors, investigating places he’d been, plotting what to do if we do catch him. But we can’t seem to find him!”

“Oh, yeah. I had him in the back room. I’ve been treating him with the antidote and keeping detailed notes. But he just escaped and trashed the lab.”

Psst. We, uh, don’t have any footage of that…

“The monster is gone! Vanished without a trace! And the astronaut we’ve been looking for was found alive and well in the middle of the ocean thousands of miles away. What happened? We may never know. It’s a spooky mystery!”

And then when the one guy tells him how stupid he is: “What do you want from me, Doctor? I don’t have a precision mind like you!”

I was getting this sort of actual anger when watching The Bubble on Friday. I was experiencing actual, legitimate irritation at just how STUPID the husband and the pilot were. Usually bad acting in a bad movie is something that I can gloss over, or appreciate for kitsch. But in The Bubble the sheer obnoxiousness of it combined with how wooden the husband was was really REALLY irritating me for some reason.

Monster A Go Go is a worse movie by every possible metric. But I can watch it as they make fun of it. But I honestly don’t know if I have the stomach to ever watch The Bubble again … riffing or not. I hated the main character that much.

When I started watching the show in earnest, I didn’t see this one because CC had lost the rights to the movie and the show was cancelled. They did repeats of seasons 4 thru 7 but I didn’t see this one until I saw it online. It’s become a favorite of mine since. The movie in itself is a real mishmash. Looks like they had one ending in mind but decided to go another route and totally botched it.

This movie is one of the ones that just doesn’t stick with me. I watched it yesterday, and already remember almost nothing about the movie itself.

The episode at least has Crow’s song in the “I don’t get you” host segment.

So I just rewatched this one for the first time in many years. (By the way, Mega Cynthia was awesome) And yes, as everybody has pointed out, it’s kinda a dumpster fire. Mushy sound, disjointed…everything. You can see how it’s winning the worst movie poll.

But it has been so loong I forgot how bad the editing is. Just for context I went to school and trained in film editing. And I spent some of the '90s editing for television. So it is with my humble, once-professional eye, that this might be the worst edited film ever.

I can get how some of this is on the director(s). Nothing you can do with a lack of coverage. And the producer might be demanding a certain length so you cant cut for time or pacing. But daaaam. Whole scenes where the cameras just sits there. With nothing happening. We get some soldiers looking at an oscilloscope, in real-time, with nobody talking. Even if you can’t pace it for time, cut away to other soldiers doing something. We watch a helicopter’s entire landing sequence. If you can not cut away, cut in ANYTHING.
Ghaaaa

Crow’s “Hum de dee he he…HUA HUA” song is hand’s down the best non-song song in the series.

I LOVE THAT GOOFY LITTLE NUMBER even as I have no idea where the hell that originally came from.

It was funny to see that show up elsewhere in the series. In the closing host segment of The Projected Man in Season 9, when Bobo and Brain Guy march into Castle Forrester, they can be heard chanting “hum de dee he he HUA HUA!”