Ten miles or so of this to test the new suspension. Skipped out on chores and errands; went into the bush and got dusty today. 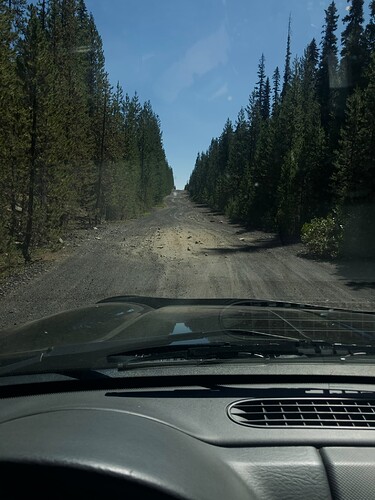 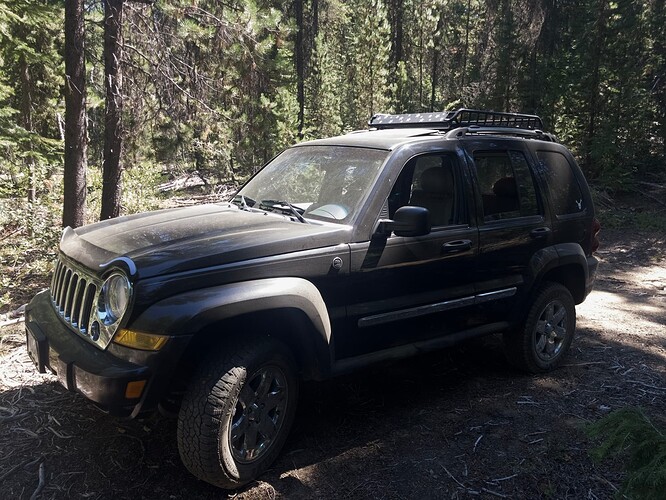 My new gloves worked out a treat. I didn’t know people really paid attention, especially since I wear non-company-issued gloves every day, but every other person was like “nice gloves!”

The orange color is a nice touch. AND, the rubber “ribs” on the top of the fingers means I can probably punch things and get some protection for my striker knuckle.

Here’s an “accomplishment”! I got drunk as hell, failed to entice some rubes to play twenty a rack at their hillbilly rules pool, lost my phone, doubled back just now, found it, as well as one of my trusty Staedtler-Mars Technico 780s in the mud.

I call that a win. Plus I somehow bought a bunch of Doritos Flamin Hot Nacho when in my stupor, which I eat now, in addition to charging my phone.

Plus I get to continue to watch McCloud seduce lady cops and vicariously live my secret life.

I changed the low beam headlight bulbs in my car today.

I remember doing the same job with a different car 20+ years ago, where I had to remove the entire headlight assembly to get to the bulb, and then I had to manually re-aim the headlights afterward. I can’t remember what kind of car that was, unfortunately.

Today, the job was MUCH MUCH easier! The bulbs hang out the back of the assembly, are very easily accessed, and come out with a simple 1/8 turn, plus undoing a simple clip. About a minute to change each one! I love good design!

Yes, changing bulbs is easier now. No more big sealed beam bulbs. The ones on our 93 Cherokee burned out way too often.

I also changed a license plate bulb today. I confess that I had been completely ignorant as to the existence of such a light up until very recently.

That hasn’t always been a thing, has it?

That hasn’t always been a thing, has it?

Only since they decided that we could be ticketed for it. $$

Finally agreed to have a junk car place buy my old car for $200, and have it towed today at noon.

That’ll be good to have it out of my carport, although in parts alone there’s a hell of a lot more than a few bills in it.

But I don’t care anymore. For some reason I took the full-sized spare out of the trunk a while ago. My place can always use some more junk hanging around inside!

Took the plates off, as well, just because.

I grew a lot of habanero peppers. I did not wipe the counter before I took this picture. 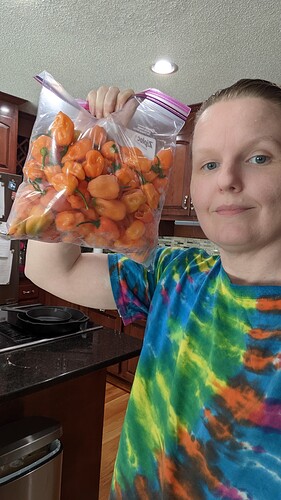 Pitched some papers into Recycling. Freed up an additional 8" X 12" X 8" of closet space.

Perhaps I’ll go celebrate now by eating some pancakes. Well, one pancake. This is about mundane achievements, after all.

Wow, those are gorgeous!

Will you make a whole bunch of salsa or pickle them or candy them or…?

Pretty mundane. Appearing in court for a hearing this afternoon.

Sewed on a button on a blue wool blazer, pretty sure it won’t fall off. Found that an old pair of dark grey wool slacks fits around my waist (the hems have become undone…I think they were originally cuffs…not going to tack them up…meh, it’s fine!), have a white shirt free of stains, and got a good length on a red necktie (long torso…it takes some trial and error to get the exact right length). Not going to polish a pair of black shoes…meh…they’re fine.

As an added bonus, I’ll probably even shower and shave! Even trimmed my fingernails and most of my toenails. It’s hygiene day!

Pretty proud I can button the top button of the blazer and that the trousers fit around the waist…it was not always so!

So now I can continue watching McCloud for a bit!

Post-fruitless hearing (my third court appearance without representation, second hearing). The judge was a notorious hard-…uh…ball? So I’m due for another hearing next month.

Still can get a hardship permit from the DMV, using their own civil, administrative Implied Consent suspension, once I get the SR-22 from my car insurer. No blow-n-go, no BS classes/evaluations, etc.

No, I’m prepared to take my medicine like a man person, but this is getting ridiculous. There is no way I’m ever driving while impaired again. That is, no more impaired than I usually aim. I probably have brain damage of some kind!

It’s fun playing dress up, though: it’s like going to church, except I didn’t hit a bar afterwards and mack on women and earn respect of my male cohort!

This little Linux photo editor called Pinta is bugging out on me, so I posted the picture without my rude hand gestures, since it was inconvenient to blur them. Should have pulled up my pants to the waist, though…I was sitting down for quite a while.

The Gorilla spray-on-glue held! Sort of…

For next time? I’ll sew up the hems by hand, put a nice crease in them, and polish a different pair of black dress boots. They say the square-toed shoes are démodé, dont’cha know! But they need cleaning and polishing as well.

Single point threading on the lathe! 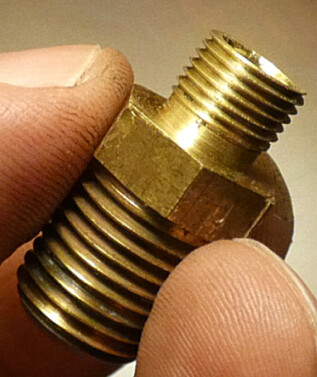 So I could attached it to another fitting to make this: 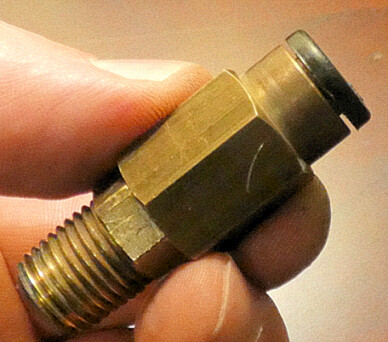 Sure you could buy one of those for less than $5 but where’s the fun in that?

So, I was going through boxes of my dad’s stuff to look for any batteries that might be leaking, found a few that were just starting, but also found his torpedo pencil the he must have got at the New London naval base in the early 50s.

Measured the little bit of lead that’s still in it and it’s a size that hasn’t been made since the 60s. There are a few people on the internet that sell the 1.18mm size for vintage pencils but their prices are high.

There is plenty of 1.3mm lead still in production, so I got a bunch of that for a few bucks with my weekend amazon order.

I tried a bunch of ways to make a miniature version of a pencil sharpener to shave down the leads but none of them worked. Then I remembered I have spent a lot of time making my mini lathe very stable and precise, so why not use that. Ground a tool that would both cut and stabilize the lead, lined everything up and cut a bunch of leads down to the proper size for the old pencil. 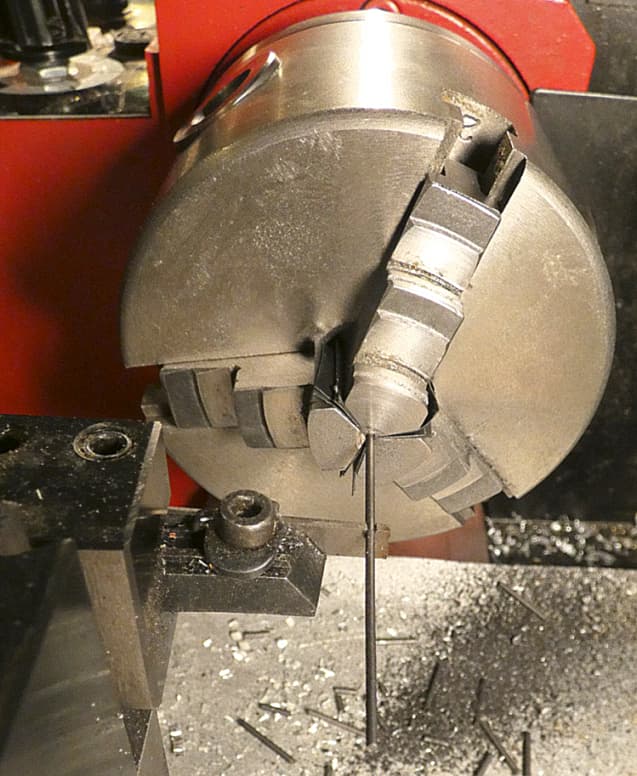 Now I’ve got a lifetime supply of lead for the old torpedo pencil.

I tried a bunch of ways to make a miniature version of a pencil sharpener to shave down the leads but none of them worked. Then I remembered I have spent a lot of time making my mini lathe very stable and precise, so why not use that.

Well, whatever it is, you are damned clever and capable.

I submit that you probably win the thread, for the moment.

I could only get a single channel of audio when using my Cowon D3 DAP and at first I thought the cable on my Sennheisers needed replaced again. A different pair of headphones though revealed it was the player’s port. Wiggling the jack in the port could get stereo to temporarily return so it seemed like it was just a loose connection. Got it opened up and and it seems the black bracket in the top right with the white dot with red crosses on was just loose enough that there wasn’t enough pressure for the contacts to maintain a reliable stereo connection. Rather than dismantle and resolder I opted for something a little simpler and low-tech - a small strip of paper folded up with a smidgeon of glue sandwiched between the bracket and the battery to hold it in place. Works like a charm so far. 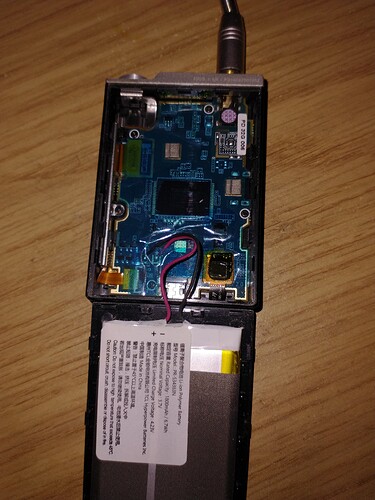 Further to this, that DIY fix wasn’t the most robust which isn’t surprising really. The headphone jack wasn’t mounted on top of the board rather within a cutout so the additional pressure that initially helped just put more strain on the solder joints so I had to do it properly.

After eventually figuring out how to dismantle it I resoldered them which had me a little nervous as there was a tiny surface mounted resistor that was a little closer to one than I was comfortable with. I’m not very experienced at soldering so I didn’t want to attempt it unless it was really necessary in case I bu##ered it up. Fortunately I didn’t and it’s working perfectly again.

I just cleaned out the filters in my dishwasher. It was quite gross. This was the first time I ever attempted this, and I found something that looks like a rubber grommet in the process, which didn’t look like it belonged to any of the parts I had removed. I’m about 80% sure the dishwasher is back in working order. Fingers crossed.

Edit: I found a place for the rubber grommet piece – where the spray arm collar sits on the supply line (I am making up terms here because I don’t know what any of these parts are actually called). Maybe it belongs there.

You people are putting me to shame! Fixing dishwashers, shaving lead to ±0.05%, soldering DACs.

Well…like Bronson, I’ll get there someday.

But I did manage to look at the score and hear a MIDI file of an old friend’s latest composition. As well as take a phone call (on my brand new phone! rahrah!) from him which consisted of a lot of me saying, “take it from bar 16? OK, yeah, I hear that…interesting you put the minor 7 in the bass there…OK…bar 22, right? Yeah, but good luck finding a singer who can do those intervals!..OK, yeah, you can do it, probably with your background in Wagner…no, it’s solid, I just wouldn’t analyze the piece in terms of major/minor classical period harmony, more early modern modal music…OK, well, so long pal!”

Maybe there is something to the notion that one’s pets tend to resemble their owners, and all friends look alike. He’s long-winded, but so am I!

But I read through his piece of music and talked with him about it!

I became a man of patience, coming from a person who requires patience himself, normally having none.