Here’s a thread for discussion of the Pathfinder tabletop roleplaying game. I figured it was deserving of conversation as it’s gotten quite a bit of attention the past few weeks due to… reasons.

I myself am not terribly familiar with the system, though I’ve gleaned a bit from a 3rd party product I purchased.

My hope is that those who are familiar with Pathfinder can use this thread to educate those of us who want to be more familiar.

I switched over to Pathfinder from D&D when it first came out. Like most, I was motivated by my disdain for the new 4th edition D&D.

Pathfinder basically took 3rd edition D&D, under the OGL, and used it as the basis for their new game. You can still move back and forth between the systems without too much trouble. Pathfinder fixed most of the little things that were wrong with 3E and then started adding their own stuff, like new character classes and the world setting of Golarion.

Pathfinder is now on its 2nd edition, but by the time it came out I really no longer had much opportunity to game, so I haven’t really looked into it. It’s a continuation of the same d20 system that the first edition was. Paizo has also released a new sci-fi game called Starfinder using a similar rules system.

I have looked at the D&D 5th edition rules and, while they are much better than 4E, I still prefer Pathfinder.

I am usually the GM for my group, and we started playing Pathfinder when D&D 4th edition came out. I was very dissatisfied with the rules changes that came with 4th ed., and one of the players in the group mentioned that Pathfinder was continuing with the 3rd ed. ruleset under the OGL. There were a few minor changes, but it was essentially the same system, and you could take a campaign, adventure, or monster from 3rd ed. D&D and easily integrate it into Pathfinder. We called it D&D 3.75, as there was actually a 3.5 ed. of D&D before the change to 4th ed.

We also gave D&D 5th ed. a try when it came out, but in general, still prefer Pathfinder, but I have had no experience with Pathfinder 2 at all.

Part of my hesitation in moving to a new system is that I have a good amount of investment in Pathfinder between physical books, and digital resources for HeroLab and RealmWorks. I am also very used to running campaigns and encounters using those resources, so shifting to a different system would be a challenge. The few times I played 5th ed D&D was with someone else as the GM.

I just started running a new Pathfinder campaign a week and a half ago, after about a 6 month hiatus. If you have any specific questions, ask away, but I have players who know the rules better than I do. I am the GM of our group because I love to tell a good story, and can usually keep the players entertained. I also enjoy world building and map making, so being eager to do that kind of work goes a long way toward being a good GM.

I don’t play RPGs these days because of time, issues finding a good group, and the fact that interacting with people long enough to actually play a game is nightmarish, but I do still collect and read RPGs to explore mechanics and worldbuilding. So I might not be the best person to really comment on the game, but if I was going to play an RPG, it would be Pathfinder 2E.

In general, it’s a really well designed system. It’s distinct enough from 3E now to feel like its own thing. The action economy (everyone gets 3 actions and a reaction per turn) keeps things from getting too crazy, but makes tactics more important. Making your enemy lose an action or setting things up for an ally is often better than attacking, and everyone has ways to do that.

The classes are all really well done, and for once I would actually be excited to play a human fighter. They have a few little oddities, but they’re all really well balanced and fill their roles well. Multiclassing, always a bit of a weird, easily abused thing, has been changed in a way that intially feels lacking, but when you look at how flexible the rest of the system is makes sense. I haven’t been able to come up with a concept I can’t create, and there’s usually several ways to do it.

It’s also got great representation, which of course comes with the standard “it’s too woke!” “it’s not hateful enough” garbage. The sample cleric and thief are an interracial lesbian couple and there are some trans and nonbinary characters in there, too, plus a range of races and ages. I haven’t read many of the dedicated setting books, but they seem to handle non-European cultures really well and not just something for the white folks to conquer and pillage.

A while ago I was thinking about getting a play-by-post game going for people who don’t have the time or schedule to play actual gaming sessions, but I get the sense there isn’t much interest in that.

If the quietness of the MST3K tabletop Discord is anything to prove, yeah…

On an unrelated note, I’m tempted to recommend Handbook of Heroes if only because most of my PF familiarity comes from there or second hand sources.

I love Pathfinder 1E! It builds on DND 3.X and improves upon it. The Fighter is somewhat better (armor training, increased will saves, etc).

There’s more steampunk elements like clockwork creatures, firearms and plenty of more classes such as inquisitor, oracle, alchemist, witch and even gunslingers!

I’ve looked into Pathfinder 2E a bit since we started talking about it, and it looks like essentially a whole new system. Looks more complicated than 1E, which was already criticized by many for being too complicated.

I love Pathfinder 1E! It builds on DND 3.X and improves upon it. The Fighter is somewhat better (armor training, increased will saves, etc).

There’s more steampunk elements like clockwork creatures, firearms and plenty of more classes such as inquisitor, oracle, alchemist, witch and even gunslingers!

Yeah, from my limited experience thus far, it seems like Pathfinder is far better equipped to be adapted to other genres than any edition of D&D. Not that many 3rd party developers have done a fine job of doing so, but Pathfinder seems like it would be less of a headache, for multiple reasons now. 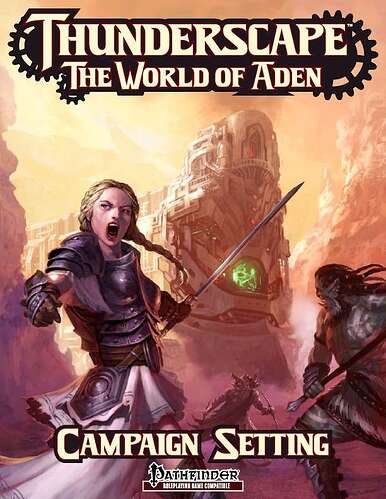 I’m using this third party setting for Pathfinder 1E, adapting some of the old DND 3.x modules for an adventure path such as the Sunless Citadel and the Forge of Fury.

A thread for D&D nonsense

[123976] Thunderscape: The World of Aden is from Kyoudai Games, funded via Kickstarter. This edition is for Pathfinder First Edition with another version available for the Tiny D6 system. If you’re my age, that name might sound familiar. Back in 1995, a computer game called Thunderscape was released which I played but never beat. This setting takes place on Aden, a world with Renaissance level techology along with steampunk and Magitek. While knights, swords, axes and bows exist, science …

That looks like it might be worth checking out. Do they have more support products planned, such as a bestiary?

There are some other materials on DriveThru RPG such as a few modules and supplements. I haven’t seen anything recently.

The publisher did release a Tiny D6 edition of Thunderscape if you like that game system. Of course, Tiny D6 would be a whole other thread.

A while ago I was thinking about getting a play-by-post game going for people who don’t have the time or schedule to play actual gaming sessions, but I get the sense there isn’t much interest in that.

It’s theoretically of interest, but it’s hard to keep one of those going for an extended period. And like glmdgrielson said, the other attempts to get a game going here haven’t really caught on. It’s a shame, because I think a MSTie-run game of They Came from Beneath the Sea could be lots of fun.

Heads up- the Lost Omens World Guide is available on the Paizo store for free until midnight PST tonight with the code OPENGAMING.

If you can grab people, I’d run a “They Came From…” game!