I’m the illest from here to Gardena.

To those of you who have never heard this song before – congratulations, you’ve led a charmed life up till now. So think twice before you click that “play” button, for once this song enters your mind, it will bury itself there and lie dormant for weeks, months, even years at a time and then out of nowhere, with no desire or intent on your part, you will find yourself humming it. 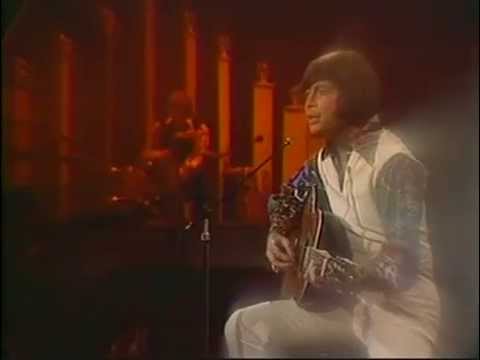 And yes, kids, that hairstyle was considered attractive back in those days. Yes, the clothes too.

I’ll never be able to escape “Drift Away” by Dobie Gray. I’ve probably heard that song more than any other song in my life, and each time has been involuntary.

Hey, he stole my guitar!

Okay, I never had that haircut, but I do own that guitar.

I’ve had Ray Charles’s performance of Hank Snow’s “Moving On” stuck in my head for many hours!

Haven’t heard it in ages, but I somehow remember it in great detail.

Meh, could be worse!

/* Oh, I forgot to mention that all day I’ve had Robbie Robertson’s voice from The Last Waltz saying “Happy Thanksgiving!” (or was it Rick Danko?).

Not a song, but still an earworm! Not as good as Ray Charles! */