Favorite of the Gizmoplex Vault Picks: Round 9 - November 2022 ("Nothing As It Seems" Month)

IN A WORLD where the, um, world is turned upside-down, there is danger, secrets, deception, adventure, and straight-up fibbing. There’s also the November roundup of MST3K episodes at the Gizmoplex, thanks to “Nothing As It Seems” month!

Reality may appear to be one way in these episodes, but hold onto your hearts, my friends, for reality may actually turn out to be SOMETHING ELSE ALTOGETHER! DUN DUN DUUUUUUUUUUUUUUUUN

This time around, we’ll witness the Cold War heating up as American agents try to stop a Russian nuclear missile launch, a group of Japanese people arriving in a seemingly normal landscape that’s actually dominated by anthropomorphic militaristic apes, an astronaut returning from a space voyage to the American Midwest only to threaten countless lives as a hulking radioactive behemoth, a collection of no-goodnik teens in 1960s America conquering a town after a secret formula turns them into unstoppable titans, a murderous madman stalking college kids for sport on his own private island, and an alien creature impregnating a hapless astronaut with… party shrimp for the greater good?

These outlandish circumstances may be inexplicable, but YOU can explain why one episode rises above the rest of the hilarious offerings this month. Which surreal selection strongly steamrolls such strange shows? What world-warping wonder wins with worship? Whose cuisine will reign supreme?!

Favorite of the Gizmoplex Vault Picks: Round 9 - November 2022 (“Nothing As It Seems” Month)

I’m a sucker for talking ape movies. So I know which one I’m voting for.

Village of the Giants. I can’t resist Bert I. Gordon.

You didn’t vote for Time of the Apes?

Bloodlust has a warm place in my heart from the, “I need to watch all my MST3K on Rhino Home Video” days, so I’m giving it my vote. It’s a pretty neat take on The Most Dangerous Game, although it’s been a while so I need to give it a fresh watch.

Gotta be Village of the Giants. Bert I. fully embracing the silly concept in another totally, 100% accurate H.G. Wells story. It’s just fun! I don’t have a fetish for giant women!

Hm - this is an unusual mixture of options. Perhaps … this is NOT as it seems…! Nah. I’d say that none of these movies is a particularly great standout … while at the same time none of them are necessarily “bad” episodes either (well they may be BAD movies but not bad episodes). The real question is how do these options rank against each other?

I love almost of these episodes, except for maybe Night of the Bloodbeast. It has always been kind of a blah episode for me. But Time of the Apes is an iconic episode for me that I can’t NOT vote for it.

Holy hell, I laughed embarrassingly hard at that.

And when she just shrugs at the camera … priceless.

Can I just say that I love how he’s been brought back into the fold here? It feels right, ya know?

“With Kevin Pollak? You liked that?”

Same, same, same. Maybe that was my first drive-in movie experience? I can’t remember, but it was bold, and I dug it.

(I love the running joke, though, especially when that gets turned AGAINST Crow. “I thought you LIKED Willow?”)

The Kevin Pollak line I quoted was when Crow started to weaken. He replied, “well…”

For posterity’s sake, here are the November lobby standees. The Kevin Pollak line I quoted was when Crow started to weaken. He replied, “well…”

And it gets to the point where he just randomly blurts out that he liked Willow apropos of absolutely nothing. 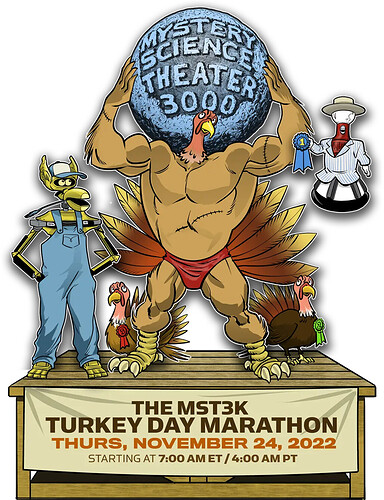 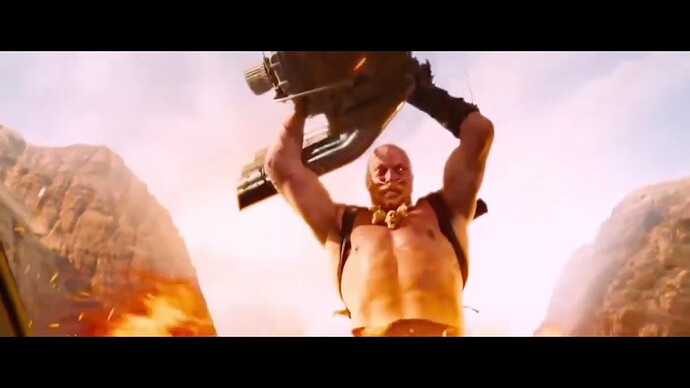 I love how the MST3K Turkey Day turkey is essentially Rictus from Mad Max: Fury Road.

These are some fun episodes, but I’m giving my vote to Night of the Blood Beast. Can’t go wrong with some Corman cheese and it includes a fantastically riffed short!