SPOILER DISCUSSION: Episode 1311, The Mask 3D. (PLEASE NOTE: This thread is NOT the Open Thread Discussion for tonight’s livestream premiere) 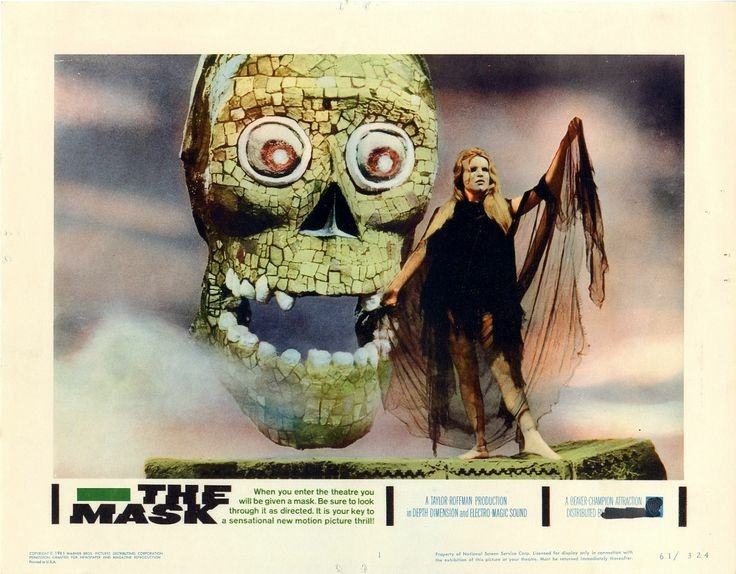 Here is your discussion thread for spoiler-filled thoughts, discussions, and observations on The Mask 3D!

This is your destination for discussing anything and everything about MST3K episode 1311: the host segments, the theater segments, the memorable quotes, the hilarious riffs, the feature presentation, all of it!

Remember: this is a spoiler discussion thread, so all points of discussion will not be spoiler-blurred. If you haven’t seen the episode, you’ll want to turn back now!

Even though we don’t have Jim Carrey yelling "SSSSSSSSSSSSMOKIN’ " in this movie, let’s go!

This was an odd one, I’ll have to come back to it for the livestream and see if my reactions to the riffing changes - so I won’t commit to an opinion on that aspect just yet. But I will say that it’s a good-time episode, it has a good energy to it. The holiday spirit was strong, I enjoyed the way they decorated the SOL, and dressed up in costumes. And the novelty of the 3D added to that spirit of fun.

Patton and Rebecca got probably the biggest laugh out of me with that bit with the landlady (doodad, lmao)

And the final sketch was a kick if only in seeing Jonah and the Bots in 3D.

EDIT - this was ported over from another thread (not by me), so that’s why it reads awkwardly, or that I’m repeating myself and adding spoilers to a spoiler free thread - sigh- I hate being made to look stupid.

Watching it now, and I’m thinking they should have titled the movie The Doodads

BTW - it’s another episode with quiet movie/loud riffs… if others are hearing the same we’ll have to bring it up to the powers that be.

Watching it now, and I’m thinking they should have titled the movie The Doodads

BTW - it’s another episode with quite movie/loud riffs… if others are hearing the same we’ll have to bring it up to the powers that be.

I’ll be watching it soon. I’m finishing a Teenage Caveman (1958) Thread then off to the mayhem.

Don’t remind me! I don’t want it to end.

Yeah I’ve only watched the first half but definitely feels like the movie audio is much lower than the riffs using the app on iPad with the built in speakers. It’s a bit better when using headphones but still seems like it’s not right

Just key points. That confused me at first–I was like, “Hey! the 3D version isn’t in 3D!” But it is.

Well, it was a graveyard smash! so there’s that

Unfortunately, I’m in the same boat. Movie’s volume low in comparison to the riffs.

I changed some audio settings, but it’s still not greatly balanced.

If I recall correctly (haven’t seen it since I was a kid), you hear a voice say, “put on the mask! Put on the mask!” and then you put on your 3D glasses. Someone feel free to correct me.

There’s a 2D option, which is what I watched. Next time, I’ll be doing it in 3D.

Not sure the built-in speakers on a tablet are going to give you an accurate experience. They’ll favour high frequencies over low.

I don’t recall a sonic imbalance when I watched it earlier today, but I’ll check back when I have time and see if it sounds “off” through both the headphones and the big loudspeakers.

Question - did the effect work on the flying eyeballs? I still saw the red/blue separation and it never coalesced into a single image.

I had an eye operation long long ago, so I never know if it’s my eyes trying to adjust, and failing, in spots, or the 3D effect collapsing.

But overall, it worked wonderfully, there were layers, a sense of depth, and the outstretched hand was sharp, I felt like I could reach out and give him a high five.

I had to watch it early for baseball reasons. Pretty good riffing! The first 3D section is about 30 minutes in and that’s probably the best one (eyes! fire!) and then there are two more a few minutes long in the actual movie. The final host segment has 3D door exit and sketch.

Best thing about the movie: the car Dr. Barnes drives

Absolutely no motivation for strangling women from the 3D mask fever dreams, so not sure what they were going for there.

Personal note: I wasn’t in the credits again!!

Is that “Put the mask on!” instruction given every time there’s going to be a 3D scene, or should we leave them on the whole time?

I had the same issue on both an iPad and a desktop with good speakers. I always watch the movies the first time on my iPad and I’ve never run into an audio level issue quite like this yet. This is the 2d version. Haven’t checked if the 3d version has the same problem, but it’s basically un…listenable(?) for me. In order to hear the movie audio I have to turn it up so loud Jonah and the bots are quite painfully loud.